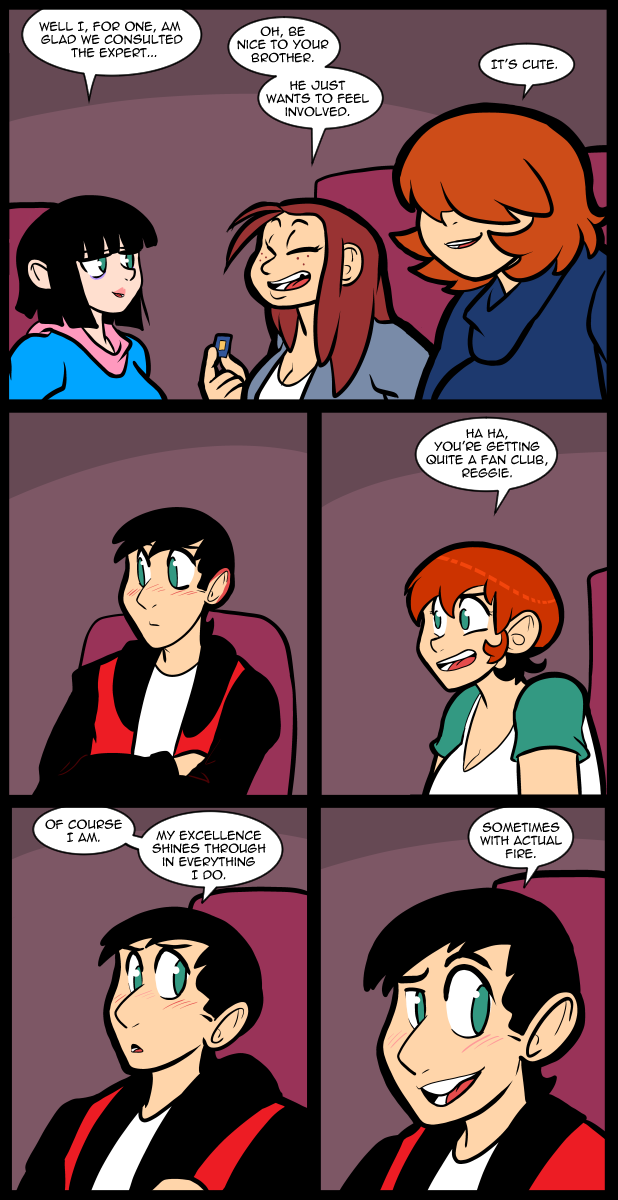 He’s beginning to loosen up.

Man, I am tired tonight. I didn’t sleep very well the last couple of days. I think I’m gonna do that for a bit.

“didn’t sleep very well the last couple of days. ”
Cause you poured everything out into your comic. Rest well, yarnspinner.

Was that a self-deprecating joke?

Or was he talking about burning the evidence? Actual fire; metaphor or actual? Hmmmmm…. I wonder what he’s planning.

Bet he’s talking about the display fire from way back. XD

Pretty sure its this. Which is actually great because it shows he’s at least making a little progress in at least becoming a little self aware. A little.

Or the time he microwaved his uniform and started a fire. IIRC, it was stated, or at least implied, that Reggie manages to accidentally start fires on a fairly regular basis.

At I open this page the advertisement in the sidebar is showing the same gold microbar as she is holding in the comic.

Targeted advertising is a hell of a drug

Has we seen him blush? I can’t remember.

Yes. Maddison has made Reggie blush a few times, and I think Alex as well once or twice.

Welp, I had a little time, and wanted to find out, so I did some spelunking in the achives. Jackie deploys the blush often, and for my money, quite skillfully.

Brooksie and Jess, by Nina. /comics1/1439-unemployment-benefits

Does Reggie kind of remind you of Templeton from Charlotte’s Web-at least the cartoon-but more likable?

I would attribute that to the way he is drawn, and the personality seems close but not quite full on Templeton

Jackie please, please, respond to me if you see this.

If there is ANYTHING I can do to support this comic let me know
I have some ideas of what to do. if you need them let me know

The patreon is working pretty well, but if you want to things feel free.