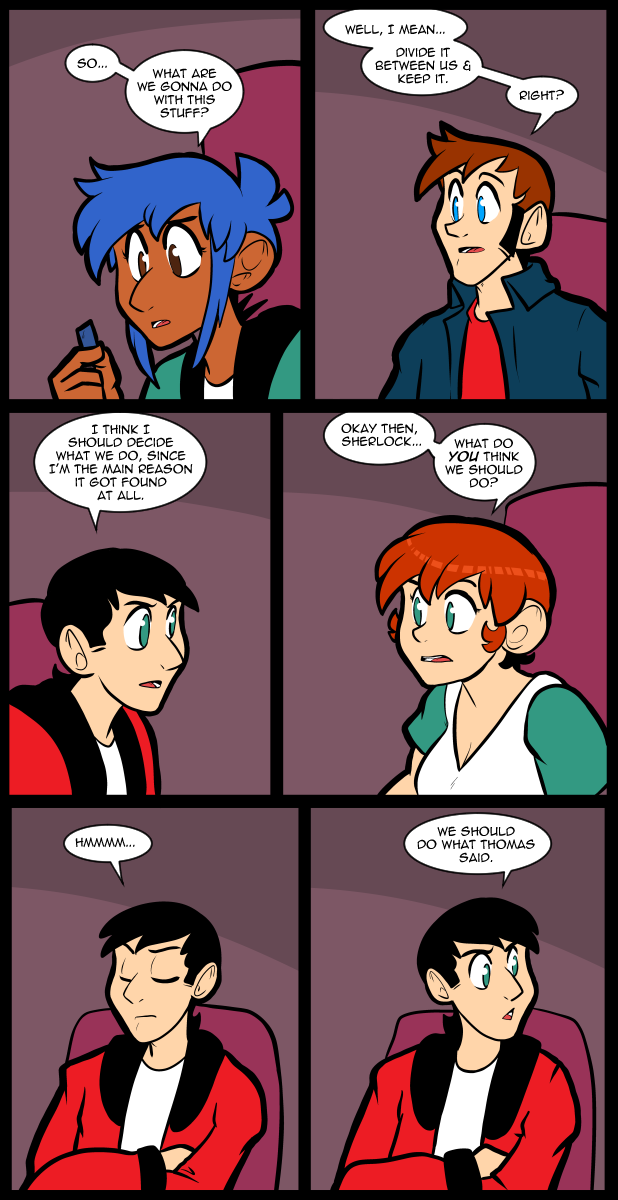 Sometimes people are just dumb. It’s very possible that Reggie hadn’t given any thought to the question, he just felt like he should be the one making choices. Apart from the context, this is a transcript of a store meeting I was at essentially. If memory serves the assistant suggested a course of action & the manager stopped them because they were the one who should be making decisions, & then they repeated the idea unironically. Sometimes people are just dumb.

Although in Reggie’s case it’s almost endearing because he’s so transparently insecure. His attitude is childish & petulant, because he’s not confident in the real sense of the word. Which is essentially his main character flaw he’s always trying to overcome. I can certainly empathize. I struggle with character flaws I’m keenly aware of all the time, so it must be much harder to deal with ones you don’t really understand as flaws.

Alex & Patty essentially accept Reggie as he is, having met him at point where he came across as genuinely confident & skilled. Jo has forgiven him because she caused their falling out in the first place. Carol tolerates him because she trusts the value others place in him & sees some value in him as well. (In actuality they are very similar characters deep down.) John has developed some level of respect for him in spite of the rivalry he’s on the losing side of at the moment. Thomas sees him as a misguided friend, in addition to being useful. Victoria loves her brother, but is wary of him as a matter of course for their family dynamic. Although at the same time she’s beginning to see him as a person via interacting with him in a social setting. People don’t always make that connection with siblings. In some ways accidentally ending up in her brother’s peer group, & vice versa, has actually strengthened their family bond in ways I don’t think they understand. In a family whose baseline is adversarial seeing the human side of one another can alter that dynamic.

The short version of all that is he’d have a lot easier time if he could get out of his own way. The intense desire for recognition & validation through adulation really hinders him. Someday, if he learns his own worth he’ll be able to see the value in others, which will help him make real connections.

I’m glad he made this decision. What might normally happen is that Reggie would choose an apposite position. But having asserted, he actually credited Thomas’ plan. Usually it isn’t so baldly stated, as Jackie laid out. I will chalk it up to character.

Early Reggie with a massive chip on his shoulder would probably have demanded the whole thing. But more recently, this feels exactly like the choice he would have made- at this point everyone involved knows that his pride demands he try to take credit for at least part of the success, but they also know that Thomas generally has the better ideas. And so he reminded everyone that he made a contribution, and then decided to trust Thomas.

Thomas, for his own part, probably anticipated this and feels mildly smug about it, but ultimately trusts Reggie- at least in the same way Thomas usually trusts people to remain in character, but I think more recently he’s coming to actually depend on his friends more often.

Even if pragmatism dictates a bigger share, it’s ultimately irrelevant.

What matters is that everyone in this scheme worked as a team. They get a fair distribution of the earnings amongst themselves.

my sister once offered me the idea, of- “Do your own thing, and F**k everyone else”.
I admire that stance of independence, but- I think most people can’t do that idea, 100 percent of the time.

I think most people need friends, because most people have an emotional need to be social.
I think that most people wouldn’t make it, if they tried to be a hermit.

So I can kill people at random because “Do your own thing, and F**k everyone else”?

*smirk* Yeah, that’s “exactly” what she meant.
You want to try it in your neighborhood, + get back to us?
There are exceptions to every rule, and all of that. ;D
Cheers.

Or, as a wise person said:

“everyone should discuss and discuss rationaly.

To make it anything else is just asking for a schism.”

I’d say it’s both more and less complicated than that.

Reggie has taken ownership of the decision, and ownership has been tacitly implied. He then chooses to go with Thomas’s decision, pretty much overriding anyone else’s possible objections …

Thomas can’t object, he suggested it, and no one there is going to override both Thomas and Reggie, especially since they’d also need to say why Reggie should not take ownership …

Nobody should object, everyone should discuss and discuss rationaly.

To make it anything else is just asking for a schism.

I am SO fed up with people who think they should be in charge, when they haven’t got the guts, brains, personal capital, nor ability to think creatively- if not outside Box… there’ve been managers who literally Couldn’t take an idea that wasn’t theirs if their job depended on it. And in living memory, she did get all of the whole department fired. (It was a small department, but still).

And this is why I don’t believe in arbitrary hierarchies. At the end of the day, nobody is perfect and real productivity comes from mutual understanding of one towards the other.

Reggie: “I actually don’t care I just wanted to be consulted.”

That nugget about not connecting with your siblings is very true. My brother and I have an entirely amicable relationship, and he’ll always be my brother, but I’m not sure I’d say we’re friends. We don’t see outside of family lunches and such, and rarely talk. Our interests diverged fairly early on, and the few things we really have in common are all left overs from when we were little kids.

It’s interesting to see familiar situations like that play out in fiction. Makes it very relatable.

Your characters continue to be nuanced and interesting. I really love this comic, and a large part of that is because I care about the characters.

X2. Just want to say, this is one of the few comics where i generally read any comments, and I usually read them all. Sometimes I think not all of your characters are in the comic.

Yeah, it’s always been that way.

I’ve never really been a big fan of the whole pragmatic approach to division of earnings based upon “who contributed more to the whole team than others”. I sincerely find such notions to be ultimately irrelevant in the grand scheme of things. What matters is that everyone worked as a team and they get their share based upon the fact that they contributed as team members. When you have one person take the whole “I should get MORE because it was “, it’s pretty much asking for schismatic tensions to build which can ultimately divide acquaintances towards separate factions or even potential war. And we all know how long it takes to resolve such differences. It can take days, months, years, potentially even generations with the parents and elders forcing their children and descendants to inherit their grudges in the name of clan pride over an incident aeons ago that was, for all intents and purposes, realistically petty in hindsight.