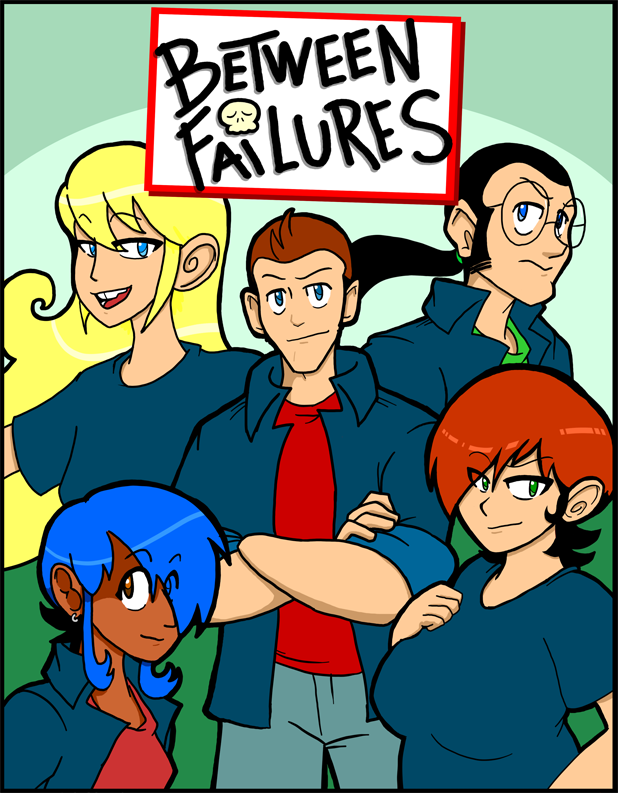 If this is your first time visiting my comic, and you came here from certain ad links, this image is intended to give you hope.  I’ve improved a lot since I off handedly started this adventure some 4 years ago. (More like 7 now…)

The story concerns itself chiefly with the lives of a group of people working in an entertainment superstore.  A poorly managed one in Kansas to be exact, but it could really be almost anywhere.  I don’t even think mention is made of their geographic location until well into the second story arc.  Which wouldn’t be so long except that the first two arcs are over 300 pages each.  It all seems quite natural when you read it though.  Anyway, the stories are not biographical, but some of them are based on things that happened to me, and people I worked with.  Some that seem the most impossible are actually very real.  I was lucky enough to work with some very exceptional people over the years.  They made it possible for me to survive in the hellish landscape of retail sales.  In some ways Between Failures is a message of hope for anyone still trapped there.  There is a light at the end of that tunnel.

Originally I started posting Between Failures on Smackjeeves, and it gained a little following there.  I then began posting it on my Deviantart site, and Drunk Duck.  Drunk Duck was where it finally “took off”.  I surround took off in quotes because taking off is kind of relative.  As of the time of this writing the comic supports its own space, advertisements, and occasional upgrades.

I was fortunate enough to find friends on all of the sites Between Failures has called home.  Friends I have never met face to face.  Good and kind people who supported me in the darkest times, and shared my victories when they came.  Many of them have sites listed on my links page.  If you have time to spare I encourage you to look over their work.   Even the meticulous language that is American English can’t express my gratitude properly to them.

The update schedule is Monday, Wednesday,  Friday, right now.  The blogs only rarely have anything to do with the page above them.  I basically use them as a journal.  If you are interested in the man behind the magic that is where you’ll find him.  The site was recently upgraded so I can respond directly to comments.  If you have any sensible questions I’ll do my best to answer them as quickly as I can.  You can also email me, or contact me on Twitter, Facebook, Deviantart, and probably other sites I’ve forgotten about.

That’s pretty much all I can think of to say at the moment.  I hope you enjoy reading my comic.

I read 600 of these pages in one sitting. This is brilliant stuff! I have returned to the beginning on a quest. So help me I am going to comment on every page. You will never be able to produce this stuff fast enough. One page at a time is agonizingly slow for such a dynamic and captivatingly absorbing story-line.

Man, I didn’t realize this was here. I must have missed it somehow. Many thanks for reading. I appreciate it. Good luck on your quest, if you haven’t already done it under a different user name.

OTHER USER NAME… Absolutely not. I love copy and paste. Furthermore, I hope to make it my full-time Pseudonym some day, even though I do abbreviate it for now, so getting it out there serves my own devious plans for world domination….MWUUAHHH!!! Never-mind my bad… You are most welcome, Indeed I am gratified that I can help in any way. Small things like the actual first page having no dialog, Indeed being the outer cover-image of what would be the hard-print version, tend to make comment boxes less noticeable in the overall programming and design of a web page. I am glad I could inadvertently point it out to you. Tell me do you do your own codeing?

This has thoroughly amused me thus far. Keep up the good work.

I want to read this, but the website’s all left justified on a wide screen display… the right side is pretty much blank…

But then when I click next, it’s left justified again… D:

It’s always just bugged me… Why’s John not in the title picture?

Ran out of space.

Found the link through Jeph Jacques at Questionable Content. I don’t have time to go through all the archives right now, but I’m working on getting caught up!

Yo, another person one who found your comic through Questionable Content here!

I always start reading from the beginning, but I couldnt this time.
Using Firefox 3.6 and the “first” link on the main page, then “Next” on “every-story-..”, I get this message;

The page you are trying to view cannot be shown because it uses an invalid or unsupported form of compression.

*EDIT* Though if I click on the archives link, then chose “Wakey-Wakey-..” everything works fine..hmm..weird..well..now you know, eitherway ^^

Does the links page still exist? I can’t seem to locate it on the current site.

I think the code exists someplace in the server, but the link to the page stopped working when hiveworks put me on their servers. Almost all the people I linked to are either on the hiveworks banner now, or don’t have comics anymore. If you’re trying to remember one I’ll send you a link if you email me. The address is on the about page.

*starts re-reading BF for the umpteenth time* I really do -love- this comic. =)

hey, i live in kansas! wild.

Re-reading this after a long while. <3

The next generation of readers has arrived. You will fear our power to add new comments.

Almost 2400 pages in the archive when I start this.

Weird that it seems like every other week for the past few months I’m finding gems from the early-mid 2000’s; after having read comics like QC, and most of the recommended links were dead.
Great to see some good content without having to use the Wayback Machine, aka, Internet Archive.