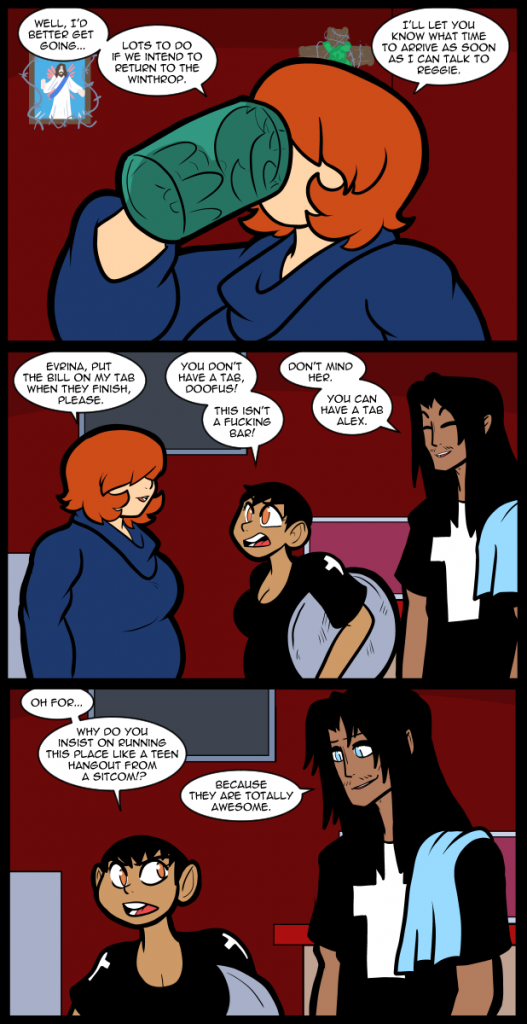 I’m taking it on faith that most readers will be smart enough to understand that Alex either speaks just before, or just after she necks her drink. Since my comic requires a fairly intense level of devotion, it does tend to have a better sort of reader, so my worry is minimal. It’s not the best way to do the page really, but sometimes you need to fudge things for time & space. I’m also relying on your concept of object permanence to do the lifting as far as knowing Jess & Jo are off camera. Also not a very good way to make a comic. When making anything there’s usually the version that exists in your head, & the version you can actually make. I’ve learned to accept that those visions are often very different. It’s not the kind of thing you can do when you’re building a roller coaster, or suspension bridge, but, luckily for everyone, my job is not quite so vital or dangerous when I fail to hit my mark.

When I first started making his comic there was a real boom in thinking about what the best ways to make comics were. The discussions were generally going on in groups of people who were, objectively, terrible at making comics. As the years have rolled on some of those people failed, some improved, others succeeded in spite of never getting better, or even trying very hard in the first place. Primarily because, in my considered opinion, life is not fair, & skills are not evenly distributed.

That’s all as may be, but I think back on those times whenever I cut a corner for time. Obviously I think about those times a lot. I remember being talked down to by people who eventually couldn’t hack it & gave up. Which allows me a brief moment of joy as I revel in their failure. Not for too long, just for a brief, extremely petty, moment. For I, like most artists, am a machine that runs on validation & vindictiveness. XD