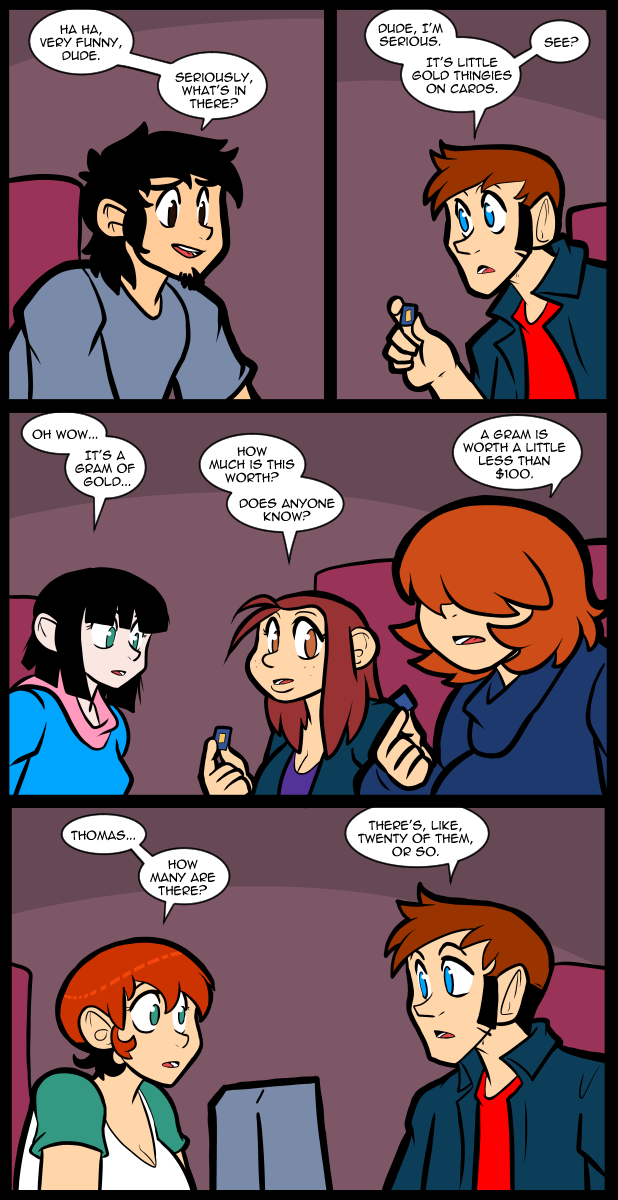 There were several different versions of what they found in the safe, in the box, & in the smaller box. Originally Thomas was going to find a wallet with ID and some 1000$ bills, but it was to convoluted to make it happen. A 1000 dollar bill is actually worth more than its face value now because they don’t print them anymore. The prices can go high enough that it’s an amount of money that could break the story. Large sums of money injected into the world of the working poor can shift a narrative badly in a lot of unintended directions. It had to be just enough to be a windfall, but not enough to cause people to wonder where they all got some cash. Gold is very stable as far as value is concerned, so it made for an easier thing to use, plus it makes sense for the man to have some stored in a box in his fallout shelter. These kind of gram bars have been widely available for long enough for him to have purchased a few. Coins might have worked too, but it’s easier to know the approximate value of a specific portion of something. Coins can fluctuate in value quite a bit, so it would require a lot more explanation in the comic to make it seem plausible.

Not that it matters, but Gold is not worth that much, about half.
https://www.jmbullion.com/charts/gold-price/

Yeah, it changes over time, so you just give vague approximations rather than pinning it down.

Actual gold, even if it is small amounts of it is an actual twist these days.

Aww. I wanted Alex to show off her knowledge about, say, the various different designers who made Liberty Head gold coins.

I found $500 dollars loose on the beach once. It was great. I got two teeth extracted with it. Exciting adult stuff.

Tell us where that BEACH is!

I was working security overnight at a Trojan Condom tent, behind Club LaVela, on Panama City Beach, Florida. The smell of piss, stale beer, and too much axe body spray is just SO GLAMOROUS. I found the cash in a cheap money clip , no ID,so it instantly became mine.

Twenty or so. And on a six-way split.

Maybe two weeks’ groceries worth of gold. Still, not bad for a night’s work.

It would be an eight-way split, if I remember correctly. Reggie and Jo were also there.

The little gram bars make a lot of sense for me. It’s the sort of thing that a regular person might purchase whenever they had a little spare cash. As noted they are easier to dispose of as well. The greater value for Thomas is that this caps a story that he can milk for the rest of his life.

Doomers and preppers do like to buy gold. But I read a warning from someone who claimed they lived through the Argentine meltdown. In a breakdown-of-civilization scenario, once word gets around that you have gold, bad people show up and torture you to find out where your gold is.

Silver does not elicit the same greed reaction. Two kilos of silver is over $1000 today so it’s easy enough to store. So if you want to be a smart doomer, buy silver instead of gold.

Trick of course is not to let people know you have gold. Or silver. Or loose piles of cash. Of course that’s all easier said than done, but aware of more than a few crazy old farmers who pass away, kids go to clean up the old farm and find thousands of dollars in gold tucked under the bed or something.

But that’s just it, in a collapse of society scenario, having the gold doesn’t get you anything unless you try to barter with it, which kinda necessitates telling at least one person you have it, and such a situation is precisely what we’re discussing.

Honestly, a big part of why gold was used for currency back in the day was because it was pretty enough and scarce enough to be valuable, but common enough to use for coinage and useless enough to use for mostly just coinage. Also, the same properties that makes it not super useful happen to make it rather easily mintable (another plus for a currency). Granted, in today’s society it has usage for it being very ductile and highly efficient conductor, but in a post apoc that usage goes out the door again (for the most part). As such, in a post apocalypse (or other collapse of society scenario) gold isn’t especially useful until a society has been established to the point where a currency is once again more viable than barter, meaning while at first the gold will be a hot commodity because idiots recall that gold is valuable, it will rather quickly become worthless as you can’t eat it, burn it, bang it, or use it to construct anything functional like a shelter, weapon, or mode of transportation.

Silver has a lot of the same failings as gold as far as actual use/value goes, although I vaguely recall that it has some more uses, but I’m drawing a blank as to what they are, so I could easily be wrong about that. I don’t think silver is a great conductor though, so it doesn’t show up as much in tech, not that that’s especially relevant for the topic at hand.

Silver is actually quite a good conductor, but it’s not enough better than copper to make it more valuable for wires than jewelry. Still, silver solder for electronics is a thing. Other uses, off the top of my head: Mirrors, photography (silver halide or silver iodide are the light-sensitive components of the film), cloud seeding (not something you’d probably be doing a lot of after an apocalypse), medicine (it’s anti-bacterial) and dentistry for fillings.

Of the normal metals* silver is actually the best conductor. The reason gold was used in computer chips was its extreme ductility and corrosion resistance. Silver tarnishes (oxidises) and on wires that fine it would lead to failure.

I’m guessing that the guy in the bunker was just starting his gold collection, and wanted to keep collecting gold, so that he could give more gold to his family. Hm.

Hello, it’s personally interesting that you went with the gram bars as I’m actually a coin dealer. Judging by the packaging, the bars are most likely either Pamp Suisse or Credit Suiesse bars (most likely Pamp Suisse). Now, if memory serves me right, this gentleman has been in his “tomb” since the 1960’s. Unfortunately, Pamp Suisse bars were not packaged like that back then. He would have more likely bought and stashed circulated type 1 (dated 1849-1854) and type 3 dated 1856-1889) gold dollars, which were readily available back then and are still relatively inexpensive now, especially if he bought well circulated and or holed common dates just to have a little gold.

Anyway, I’m a long time reader of your comic and I’d like to say I enjoy it very much. Thank you for the work you do to bring it to us.

I just drew easy shapes to replicate over and over. It’s not meant to look like any specific type. Since so many people are obsessed with gold it’s difficult to research what various kinds of gold things looked like at specific times.

I just found this article on gold.

You’re ahead of the trend, Jackie! :D
Here’s the article: