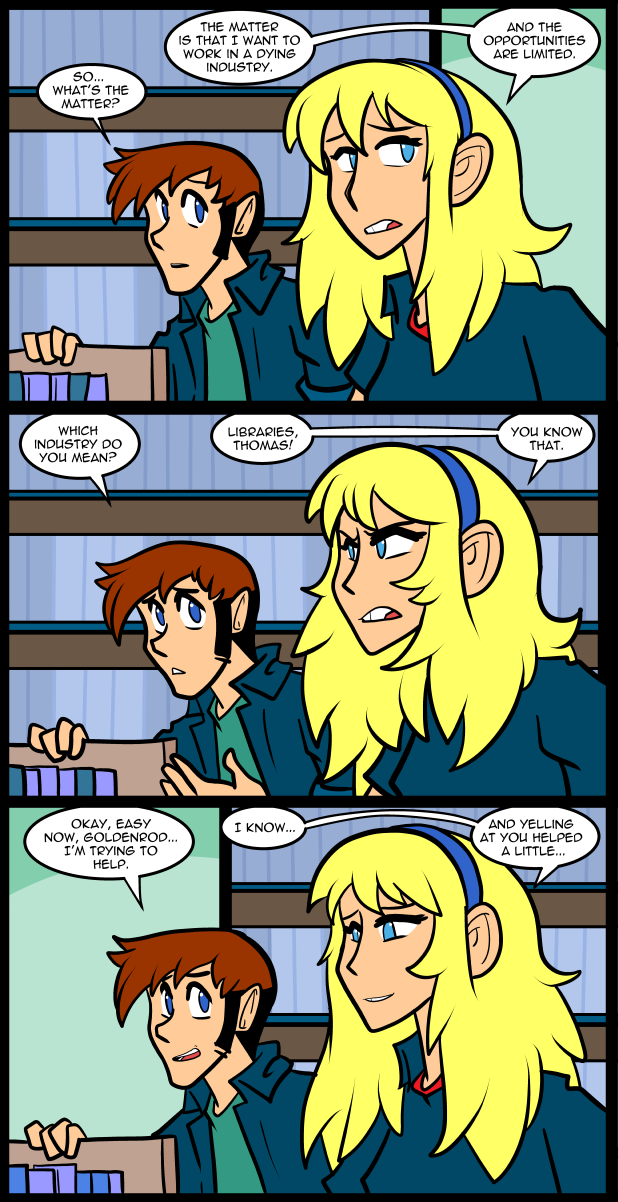 You guys remember how I was sick with flu like symptoms for several days? And I wasn’t sure how I could have gotten it? It might have been a spider bite, or something. I found a patch of necrotized skin on the underside of my right arm. It looked very much like a possible bite I got years ago. There is a crater of scabbed flesh there now which follows the same patterns. It was probably a common spider. Not venomous, but a bite from a harmless hunting spider can still make you sick. It’s possible that it was venomous too, but the reaction site was small enough I’m not sure. It may also just be coincidental. That said there is fairly strong circumstantial evidence. I probably rolled on to it in my sleep and it bit me out of fear.

To any of you waiting for Patreon sketches, your continued patience is appreciated. I’ve still working through them. There were enough new people last month that it set me back quite a bit with the several days of barfing and whatnot. I have sent out several, so be sure to check your spam folders if you didn’t okay my address in your contacts.

Several of you suggested vasaline, or vicks for the toenail thing. That was actually the first thing I tried, but it simply isn’t enough to kill what I have. I used it for several weeks but it just can’t get the killing blow in. Neither can the stuff I bought specifically made for it. Whatever this stuff is it’s tough.

I feel like I should make not of the fact that Gene Wilder passed away a day or so ago. He was always a staple my family because my father loved his work. I must have seen Silver Streak a few hundred times in passing because Dad constantly had it on TV for a while. As many times as I’ve seen it I’ll still get caught up in it because Wilder and Pryor are so compelling as a team. I’m pretty sure I’ve seen all his films at least once. I was never a big fan of Young Frankenstein, but the moments when he is on screen are some of the best in spite of the fact that I don’t find the movie itself very compelling.

Honestly, I didn’t shed a tear when I found out he had passed. I’d seen interviews with him as the alzheimers had begun to progress and it wasn’t good. That’s a terrible way to go, and he deserved better, but it is what it is. He’s beyond that now. Wilder is an integral part of some of the most important films of all time. He won’t soon be forgotten, but he is already missed.

Was that a Star Wars reference?

It is. You caught me.

Maybe I have the wrong guy, but- WHY is 3CPO called, “Goldenrod”?

Libraries? A dying industry? Is she kidding?! Libraries are thriving more than ever!!

Libraries only truly struggle when: (A) they’re located in a region where people are either illiterate or uninterested in reading; (B) they don’t have a computer lab with Internet for people to use, albeit on a time limit; or (C) their inventory is either dated or absolutely sucks.

Basically libraries that let themselves stagnate instead of evolving; the better ran ones that offer electronic media and ‘Net access at minimum at least tread water. I live in a small town/rural Kansas and the local libraries near me offer wifi access with membership and seem able to employ multiple employees just fine.

I would not be surprised to see the ones that went full grognard going under though. Just because one is not a for profit organization does not release from one market forces.

“Basically libraries that let themselves stagnate instead of evolving.”

YES, that’s the ticket! The library where I work is a great example of that, as one particular employee – who was in charge of our computers – nearly ran us into the ground by being terrified of new technology and insisting that we either couldn’t do it, or didn’t need it. She was quick to anger and slowly losing her mind though, so she was finally fired and we could see what REALLY could be done. It’s such a stark difference when a library isn’t afraid of technology. Especially when there are still so many people out there without internet or computers, but they need jobs and can only apply online. We’re the only free source of computers and internet in the area.

I really love this comic, like, a lot, so this is in no way a criticism of its general content or form!

But libraries are everything but dying. Every one I’ve worked at had substantial increases in their stats in the recent years. More people are going to them, and they’re borrowing more things, and of course any library with accessible computers will never run out of patrons.Times and tough and free stuff is nice, I assume.

The one thing that’s true though is that it’s becoming harder to find work in libraries, but that’s not because they’re dying. It’s because in many places the government is slashing funding, which forces libraries to cut staff loose.

On the plus side for Nina, the trend these days is to hire technicians or random people to do the work of actual librarians, who have master’s degrees in library science and thus typically ask for higher salaries. Who knows, she could land a position one day.

I find it amazing every time I see it. A character in a comic says something and people flock to correct it. Almost as though characters aren’t allowed to be wrong about things, or to have opinions. That’s beyond what might be comic specific circumstances.

That being said, libraries aren’t exactly an industry, either. With Print Media operating on a downward slope, traditional libraries will eventually shift focus to something more museum in nature, or to something else entirely. That being said, when was the last time an electronic media site needed a librarian? Kacy does a better summation than I a few posts below.

I get what you’re saying, characters are totally allowed to be wrong or have opinions.

People react that way because fiction has an impact on what people think, and the idea that libraries are dying is widespread enough that seeing it repeated in fiction just feeds that problem. And it’s a problem because the more people think libraries are going to disappear, the more funding gets slashed regardless of if the services are actually being used.

Kacy does provide a good summation of the facts. When it comes down to it what people need of libraries has changed with the arrival of new technologies, and the institutions that changed themselves to meet those needs are doing well, whereas those that didn’t aren’t.

As for electronic media sites needing librarians, it depends what you mean. Librarians these days are actually information professionals with a variety of skills including management, curation, coding, research, etc. I could see an electronic media site making use of that.

For what it is worth, when I had stuff on my toes, I grabbed a disposable pie pan we had sitting around and soaked my toes in hydrogen peroxide for a little while every night until they cleared up.

My toe stuff was not near as bad as your’s, but it is another tool for the toolbox, weapon for the arsenal, and any other analogy involving sets.

Obligatory “I am not a medical professional” disclaimer. I just turned an antiseptic loose and watched to see what happened.

Every time bond renewal time comes up, the local library system always cries poverty and warns of inevitable cutbacks including closing branches one day a week. Never mind the fact that when I was growing up they were closed one day a week.

Tea tree oil and sunlight worked for my toe that the nail was starting to lift away. No guarantees but maybe it’s worth a try?

Wow Nina upset shits about to get real

Libraries aren’t dying or an industry. They don’t make a profit because they provide a free service, they get their money from the government and donations. They’ll be around so long as there’s funding.

They’re also fine with the way the world is changing. Libraries in the modern day are expected to provide computers for people to use. Libraries rent out other forms of media rather than just books; you can get DVDs there. Ebooks will never kill off real books, but even if they did, libraries are adjusting to times and introducing tablet lending and such.

Is it just the angle, or did Nina got a haircut?

As a librarian I will echo many of the statements that libraries are a dying industry. The numbers do show increases in usage, circulation, and program attendance.

That said, libraries are an industry in flux. The true business of libraries has long been 3 things: information, entertainment, and education. All of those things are in the middle of changing dramatically. Education, specifically self-education, is the least changed, though the ways that people access the tools to educate themselves is changing. Entertainment is moving increasingly to subscription services and onto mobile devices. Finally, information, the most important service that a library offers is changing the most. So much more information is available to the average user now than ever before. Because of this, the job of a librarian has changed over the last few years from being a link in the chain of information access, and instead has become an educator of information literacy, or the ability to know what information is good and what is not.

A surprisingly small amount of my job is dealing with books and I was surprised at how much teaching was a part of my masters degree to become a librarian.

Do you know what else is a dying industry? Working with pigments.

Working with pigments…as in doing paintings?

I had forgotten that Gene Wilder was in Young Frankenstein, it’s been a while since I watched it. Might have to rewatch it. (Blucher!)

**The sound of horses neighing protest**

I got some kind of jungle rot under one of my toe nails whIle living in the tropics. Hurt like hell when it flared up. My wife started working for a surgeon and when he saw me limping he took a look…and the toe nail off! Cleaned the nail bed and 15 years later it hasn’t come back. The fungus that is ????the nail grew back fine.
Yes it’s the nuclear option but there it is.