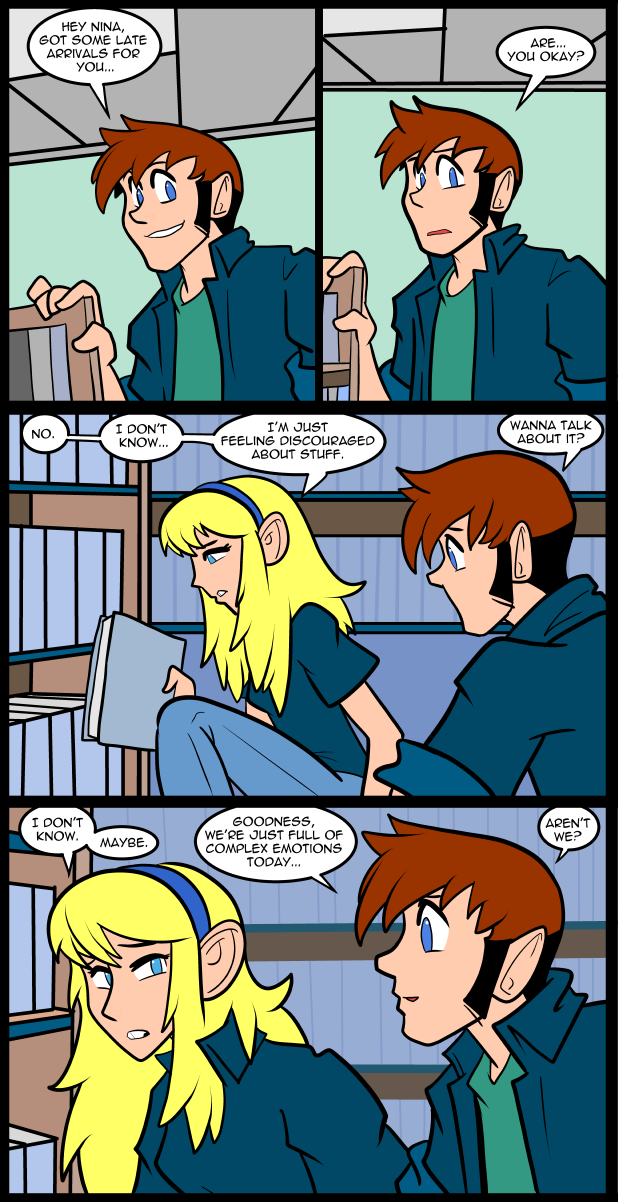 I almost went way more dramatic with this, but pulled it back because it seemed like too much when I drew it out. I have to be careful sometimes because my mood will infect the tone of the comic. It was a pretty dark weekend and when I was doing this page I wasn’t feeling very good about anything. I’ve gotten pretty good about being able to shift into work mode when I need to, but sometimes I have to be careful. This part sets up a whole string of events, and is intertwined with stuff already in the process of happening, so I don’t want to fuck it up.

Rather than answering everyone in the comments who asked similar questions, or sent emails, I’d like to take a moment to talk about my various allergy and foot care practices.
I use some kind of common saline rinse with distilled water. I forget the brand but it’s the most obvious one in Wal-Mart. Dr generic guy’s whatever thingy. He has a whole line of things with varying degrees of quackery involved. I heat it for about 35 seconds in the microwave, so it’s basically body temperature, depending on the conditions in the house. Generally I use it once a day, but if things are really bad I have been known to go as high as 3.
I also use eye drops from time to time, which help with the disconnected feeling for a little while. I try not to use them too much because my eyes already don’t seem to produce enough tears and I don’t want them to stop outright.
For my feet I use various kinds of lotions/salves. I like coconut the best because of the smell, but I also use some stuff that’s mostly lanolin. It’s comparable to the kind one of you mentioned in the comments. Chemically speaking they are essentially identical. Nothing that I have tried has really managed to heal the cracks. Basically the only time they almost went away was when I wasn’t walking much. As soon as I get mobile they break open again. Maybe if I lost more weight they wouldn’t be so stressed? Who knows? Anyway I also soak my feet in Epsom salt water. I was doing it every day for a while, but now it’s every other day, or less, depending on how busy I am. There’s no really good place to do it where I’m not disturbing anyone, or they aren’t disturbing me. I also don’t love sitting in a chair for long periods of time because my circulation still isn’t great in the bad foot, so blood pools and I don’t like it. I’ve tried to set it up so I can lay on the floor, but it doesn’t work. Sometimes I sit in the old rocking chair which helps because I can rock to keep from being stationary for too long. It’s a really awkward chair though, so I don’t do it very often, especially if I need to do things.
The salt water seems to disrupt the toenail fungus, but not enough to kill it all. Nothing apart from the nail falling completely off seems to be enough. Even on the places where that has essentially occurred it still clings to the remnants. I’ve brought it up to the doctors, but they never seem very concerned. I might try to see if there are any options I can explore though. I’m really sick of the whole thing.

Lastly, I need new things to look up. If you guys have any ideas for subjects, or shows, on TV, youtube, or whatever, let me know. I’ve listened to about a million “true” stories of various mythical creatures, seen hours and hours of urban exploration, and all manner of other stuff. What have you got? I’ve even exhausted all the podcasts I can stand at this point.

You know I’m a techie weirdo, but I really enjoy Oddity Archive on Youtube. Something tells me you’d really enjoy his videos on video companies and his record ripoffs.

You might give Critical Role a try on youtube or Geekandsundry. Voice actors playing D&D. It’s pretty fun, and it’s got a LOT of time to kill.

Aelyss isn’t kidding. The episodes are anywhere from 2-4 hours long typically. If you save the playlist on YouTube instead of going to Geek, then it will resume where you leave off. The benefit of Geek and Sundry viewing though is they don’t blur the fan art like they do in YouTube, or at least they haven’t in videos I have watched. plus, much like watching anime or a long running cartoon, you can watch the production value increase as more work and love is poured into it. The downside is some pre-research needs to be done. The characters they are playing are ones they had established before the stream by a length of time I have forgotten, so it is not like you are watching the characters from the start. Some gap filling might be needed before you start watching, thus the joys of Wiki and Wikia links.

It has to be things I can listen to while I work, so comics aren’t ideal. Although I’m always curious about what people are reading.

The titles I read other than yours are Questionable Content (and Alice Grove every now and then), Sandra & Woo, Misfile and 6 Gun Mage. In terms of listening, Pink Floyd albums (Animals, Wish you were here, etc.) have been doing it for me lately at the office. Cannot promise they will work for you too though

I’ve found a lot of relief and energy in the music of a duo called Mythos.

Phillip M. Jacksons Sequential Art, Girl Genius, Questionable Content, BF, Scapula (old), EGS, Girls With Slingshots, Two Guys and Guy, Wilde Life,Grrl Power, and DOA are in my quick access folder. I read them whether I read anything else or not.

My webcomic list is huge, I haven’t even been able to finish sorting it all yet. I’ll probably never finish reading everything.

If you are looking for some fun dnd (well mostly other games) podcasts try Fandible.com or the cult of tea and dice.

Go ahead. It’s not like I’m bound to it or anything.

I’m not sure if it would be up your alley or not, but see if you can find “The Wizard Of Speed and Time” online to watch, it’s an interesting movie in its weirdness.

Other than that, The Muppets Bohemian Rhapsody and Beaker Ode to Joy. For good music done strange.

You can try MinuteEarth and MinutePhysics although it might not be the easiest to listen without watching.
If I remember well you already watch TED talks don’t you ?

I don’t always read your blog posts so I may be mis-interpreting but I gather you have/get painful cracks in your feet. I mostly go barefoot have thick,dry calluses which occasionally develop deep cracks. These cracks are difficult to heal as long as the calluses are stiff and hard. Soaking, lotions and such are almost no help at all but I was amazed to discover a simple ingredient that you probably have in your kitchen that works wonders: vinegar!

I don’t know why it works but minutes after splashing it onto dry skin, the skin and calluses become soft and pliable. After about 5 minutes rub in some good hand or body lotion to keep the skin soft. The vinegar seems to help the absorption of the lotion as well. If you have deep cracks the vinegar may sting a bit but it’s not too bad and it doesn’t last long.

The only real downside is the odor. Vinegar is not super unpleasant but it is not a perfume and the lotion pretty much covers up the smell. Since it is acidic, it might even help with the fungus. I use diluted Clorox for household mold but that is a bit strong for tender feet.

Anyway, give it a try. It is a no risk experiment.

Also, regarding podcasts there are a number of broadcasts that are more mind nourishment rather than mind candy, namely “Science Friday” and “This American Life”. They both have a long history so you should be able to find something there that interests you.

Thanks for the tips and stuff.

Side note: “I actually like the smell of vinegar, and the taste. Like, more than is normal.

I think you’d like a good vinaigrette. A decent spinach and romaine salad with grilled chicken and balsamic vinaigrette is one of my favorite meals nowadays

People at Burning Man, walking around in alkali dust all day, get “playa foot” where the skin dries out and cracks. Vinegar is really good for that. Maybe the dust is alkaline where you walk?

Vaseline is fantastic for toe fungus/infections.

Jackie I’d love to see the original idea you had for this page. The all dramatic one.

If you’re interested in podcasts, I highly recommend TANIS by Pacific Northwest Stories. It’s like Welcome to Nightvale, but not a joke, meets the History Channel, meets the X-Files, all as a radio drama.

Oh, and Gravity Falls. It’s not exactly obscure at this point, but even with the hype when I started early last year, it surpassed my expectations and became my favorite animated series, ever.

Looking at Jackie’s twitter feed- I am really sad to hear that, the actor, Mr. Gene Wilder, has passed on recently.
If you like 1970s-era films, here are some Gene Wilder films that I recommend:
1] Willy Wonka and The Chocolate Factory,
2] Sherlock Holmes’ Smarter Brother,
3] Young Frankenstein, and
4] Silver Streak.
I think that he is a fun guy to watch.

Another obscure but good one is “Quackser Fortune Has a Cousin in the Bronx”.

Try SCP readings, or maybe some of the drama on 2b2t?

I know you said you cant stand podcasts right now, but i thought id point out some horror story podcasts any way. “The No Sleep Podcast,” “Knife Point Horror,” and “The Horror! Old Time Radio.” No sleep and Knife Point are more modern stories and The Horror is rebroadcasts of older radio plays and dramas.
They get me through my work and some of them really get under my skin, its great! Sorry if this doesnt help you.

This may be something you have been told already, but try putting Vicks Vaporub on the fungus toenails every night before you go to bed. It sounds exceedingly weird but it is A) OTC and cheap, B) nontoxic regardless of what you think of the scent, C) has some science to back it up D) effective often enough to keep me recommending it, and E) what do you have to lose? Toenails grow slow, so figure on 8-12 weeks. FWIW, I am a pharmacist.

For entertainment, listen to Kate Rusby’s music on Youtube.

It depends what interests you, I’m probably weird in my tastes. I like Vegan Black Metal Chef, Bob Ross, and documentaries about ancient cultures… mainly Egypt, Rome, and anything to do with Vikings. You could always look for good anime also, lots of anime series are fairly long-running with at least moderately interesting storylines.

I’m not sure what, if any they have in the way of audio fare, but I always find something interesting on Atlas Obscura.
As far as the vinegar on your feet thing goes, I’ve used that for athletes foot (changes the pH of the skin so the bacteria cannot grow, FYI), so maybe that will help with your feet. Good luck!