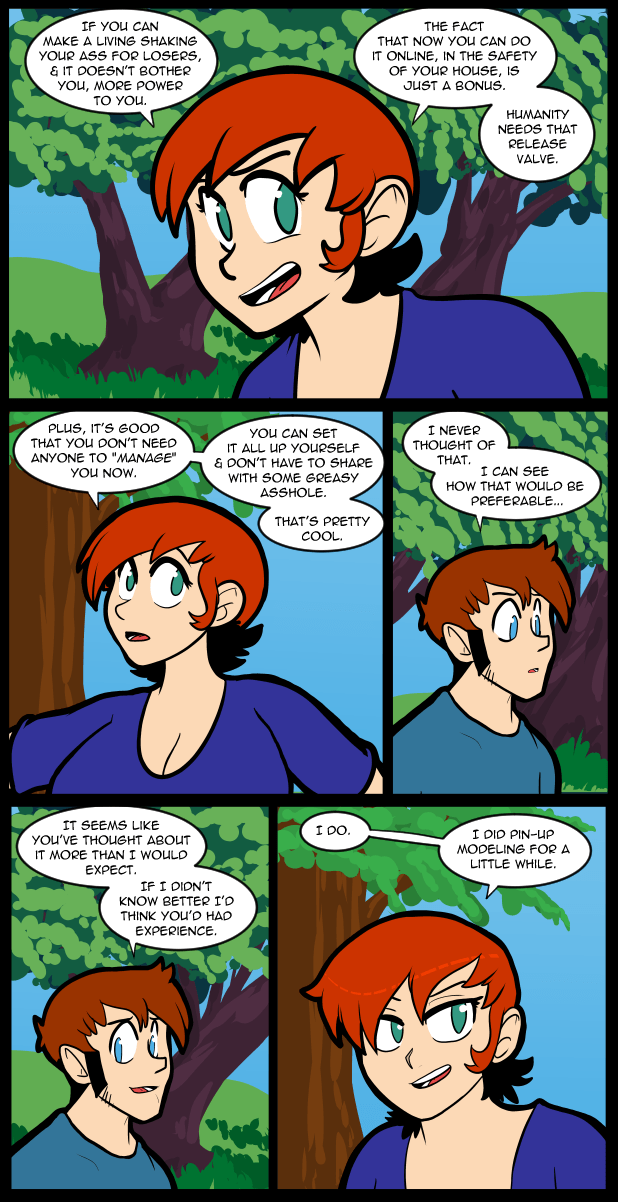 My paternal grandmother was very worldly & uncommonly accepting of others. This trickled down into the family philosophy. She wasn’t particularly opposed to erotica & told a story about one of our aunts who put herself through college writing erotica. I think about that sometimes since she died long before I started this comic. It’s comforting to think that she wouldn’t have a problem with what I do as long as it was in an attempt to improve life for others.

That sort of open-mindedness is a virtue that is sadly becoming more and more uncommon in our judgmental society. Still, I endeavor to embody it in what circles I am a part of.

Not sure I’d call it open-mindedness, considering she’s call other people losers for enjoying what’s being offered.

Yeah, It’s a pity about the double standard that Carol appears to have.
Reminds me of a very bad period my family history.
Two of my sisters-in-law used a similar double standard to steal one of my great-nieces from her mother and deny any contact for nearly 16 years.

I’m really curious how that parallels this…

Who the fuck dangles drama like that and doesn’t elaborate?!

If Carol had said shaking your arse for the lonely instead of losers, the whole discussion of double standards would not be here.
Because it has occurred and I have made a serious comment to it, I will elaborate on it a bit later. (I need to work out how to explain the correlation without giving too much detail)

I personally find that *actual, genuine open-mindnedness* is a trait that one often tends to miss. It’s quiet, unassuming, and goes unremarked. But it touches lives, and people appreciate it. Because openness is a passive sort of trait. It’s the way one reacts when presented with new information. Actively pushing for it tends to take the form of actively rooting for the underdog, which isn’t quite the same as being accepting and open.

“that is sadly becoming more and more uncommon in our judgmental society.” Actually, I’d say just the opposite: Our society is more open-minded and accepting than ever before. It’s just that with the ability to share things on internet, those who are judgemental are all the more visible.

Not to mention how load the judgmental ones can be.

Lol and this is how Patreon is now canon.

I feel like Carol is a good enough person to not force her opinion that certain people are ‘losers’ into those people’s faces. She isn’t as brusque as, for example, Evrina. Not in dealing with other people she doesn’t know as well, at least. If she then wants to talk honestly to the person she loves about a certain topic, I feel it’s not up to her to police her thoughts and/or language at that time. There might come a time when she tries to have a conversation that will lead to greater understanding and less calling people ‘losers’, but this isn’t that time, nor should it be, imo.

Welp, my mistake
I misread Carol’s position on wednesday’s comic. Sorry for getting heated the other day

I think we’re gonna some 1940’s pin-up style drawings of the girls now.

As if I don’t find Carol appealing enough already!

It sometimes feels odd trying to reconcile our elderly relatives with their younger selves. My paternal grandfather was 80 when I was born. All I remember of him was a little old man sitting on the couch with my grandma. In his youth he would have been among the last of the wild west cowboys and he could relate tales of having run ins with the Indians in pre-statehood Oklahoma. He pretty much lived up to the stereotype of the cowboy and Grandma got disowned for running away to marry him. Her father literally never spoke to her again. As it relates to family philosophy, I think this influenced my father’s relative conservatism. My father was for his generation, fairly open minded but he would have been mortified if I had to go get him at the saloon the way that he did his father.

There’s layers to this kinda thing as well. I put myself through university (in part) by working as a nude life model for an art class. I actually enjoyed it. The pay was pretty good, I was always treated very respectfully by the artists, and it was fun wandering around in-between posing sessions to see everyone’s interpretation of my figure. Holding longer poses could be very tiring though, so I made a point of doing regular exercises to keep my core stable.

This is just my view, but-
Throughout history, most of the time- working for an actual pimp/procuror is a very dangerous situation to be in. Most of the time- having that type of “overseer” puts you in a slavery job that you cant leave, + the pimp keeps you there through- fear, threats, + violence against you/the sex-worker.
Granted- sexual crimes that were done to people I care about likely colors my opinions but- please don’t ever get a job from a pimp or procuror. If a person does that, they are literally risking their life, and may end up being enslaved. Please stay away from that situation.

Sometimes even the mainstream movie industry! Harvey Weinstein isn’t the first. The “casting couch” has been a thing since the beginning.

Lol, I’ve always imagined Carol as a no-nonsense girl and so she is.

And then Thomas’s head exploded the end

Lol i suppose but he did not know he was dateing a former pin up model until now though so…extra explodyness?

“Don’t need anyone to ‘manage’ you now”. You never did. Real pimps are rarer than 90s rappers dressing like them.
Even going back to the old west, whores were the first businesswomen, taking effectively work camps and building whole towns around them.
We now live in an era where literacy is near 100%, and education is state-paid-for up to the end of high school. Why do you imagine, in THESE times, that no woman has the brains in her head to make full-time money on part-time hours, essentially being a positive and supportive girlfriend and going on dates with nice men of her own choosing for a few hours… without some seedy evil 1-dimensional boogieman male around to force her into it against her will?

Escorts are among the most independent, financially solvent, highest earning workers in ANY country, and they average so much higher job satisfaction that they’re often left completely off such studies on employment (Who really wants to think about how much happier a *whore* is than you, in your own shit job making less than a third of her money, working 60 hours a week? People with fragile egos hang themselves over that kind of epiphany.)

The only way we can look at ourselves in the mirror seems to be to tell as many lies as possible about how horrible her life must be, and send armed thugs in uniform to assault her, rape her, steal all her money (asset seizure “laws”) throw her in a cage, and abduct her previously happy, well-cared-for children from her, shoving them into a Foster system known to harbor child molesters “for their protection”, publish her name and shame her publicly.
This process is known as a “rescue” when cops brag about it in their pet news services.
Oh right, departed a bit from the exact topic: “pimps”. Those cops will also find ANY male person within 100 yards of her who is not a client, arrest him as well, and call him a “pimp” for the news. Typically he was her husband, boyfriend, landlord, or even son (Momma put her boy through college by going on paid dates? “Well! That boy is “living off the avails of prostitution!” Let’s arrest him in the middle of his classes, loudly declare him a pimp, and drag him past all his classmates and professors in handcuffs. Sure we COULD have arrested the kid at any other time or place, but we really like the humiliating people for fun!” — now IIRC, that kid beat the ridiculous charges, but after the very public display, his college threw him out and smeared his name to the point he couldn’t get into any other college either.)

Prostitution is fine. Like Carol says (if not quite how she means) it fills a vital role in any healthy society.
Everything our society does to “fix” prostitution, on the other hand, is monstrous!