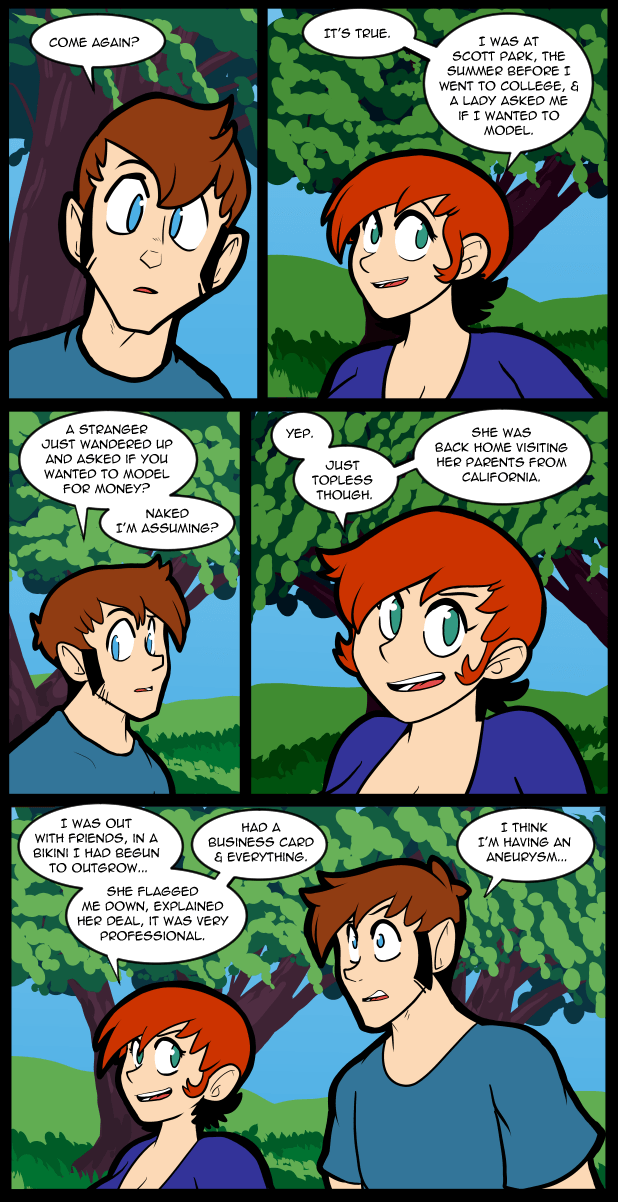 Scott Park is an actual place if you want to look at it on Google Earth. I haven’t been there in probably 30 years, so I don’t actually know what it looks like now. It’s near the fictional place Carol is supposed to be from. Since everyone has been asking, yes, I will, eventually draw at least one image from this pin up session she did. If for no reason other than to get people to stop asking. I’ll put it on the Patreon with the other saucy things. I don’t know when. Some glorious future time. I hope you’ll look forward to it.

Aneurysm from jealousy or cannot compute?

It can be both

We’re going to find out it was Veronica Vance, aren’t we…?

As I have no idea who that is it’s fairly unlikely.

I wouldn’t dare make reference to QC at this point. Interactions with the creator tend not to be positive anymore.

Jeph jackass doesn’t interact well with fans in my experience.

I should probably clarify “in Jeph’s defense”, blegh, I drunk tweeted at him twice about different characters. The second time, he blocked me on Twitter.

I don’t blame you at all. He blocks all form of criticism, no matter how polite and/or constructive. I don’t think he can tell the difference between his fans and haters anymore. It’s a shame.

Otherwise, it sounds like an OnlyFans kind of name.

Yeah, I think that he means Martin’s mom.

Correct, Vance is her ‘working’ name.

“Very professional, had a business card and everything.”

Print shops are known for their thorough background checks and vetting of customers after all.

It even had a water mark.

Don’t forget to bring your poncho when you go to check out the stereo system….

I desire to know more of this reference.

Oh honey, I worked at Kinko’s back in the day. I was a miracle worker (as so many of us were), but they were still photocopies.

Pics or it didn’t happen. :D

Thomas is almost certainly stuck between disbelief, confusion, denial and strong need to track down the pictures.

Almost the same thing happened to my wife, except on a collage campus during the summer. Almost every other detail was the same. Down to the business card. This was back in the summer of 1993. She didn’t take them up on the offer however as it was for a calendar to raise money for some fraternity’s charity function. So upstanding reason, less reputable publisher.

I thought a Venn diagram of pinup and topless had some overlap, but the latter wasn’t always needed.

A certain saucy attitude is required, and I figure Carol has that to spare. Hope Thomas gets to see some of the pictures at some point.

Correct. Carol would make an ideal pin-up model, as the sensuality of the pose and the gaze is everything.

So true! I give you what is probably the all-time,definitive pin-up photo:

Although there are stories of the studio air-brushing out any butt cleavage in some versions.

She is So teasing him with it at this point.

Thomas’ Expression in that last panel is amazing lol

You’re all missing the real point here. It is not just that Thomas is in love with Carol. Thomas is realizing that he is love with the idea and the very existence of Carol. This is very powerful, very scary, very humbling, and hopefully very grounding. Jacky is being an all cards on the table Zen master. So cool!

Well looks like my comment on the last comic was sort of accurate.So the inside of Thomas’s head exploded the end lol