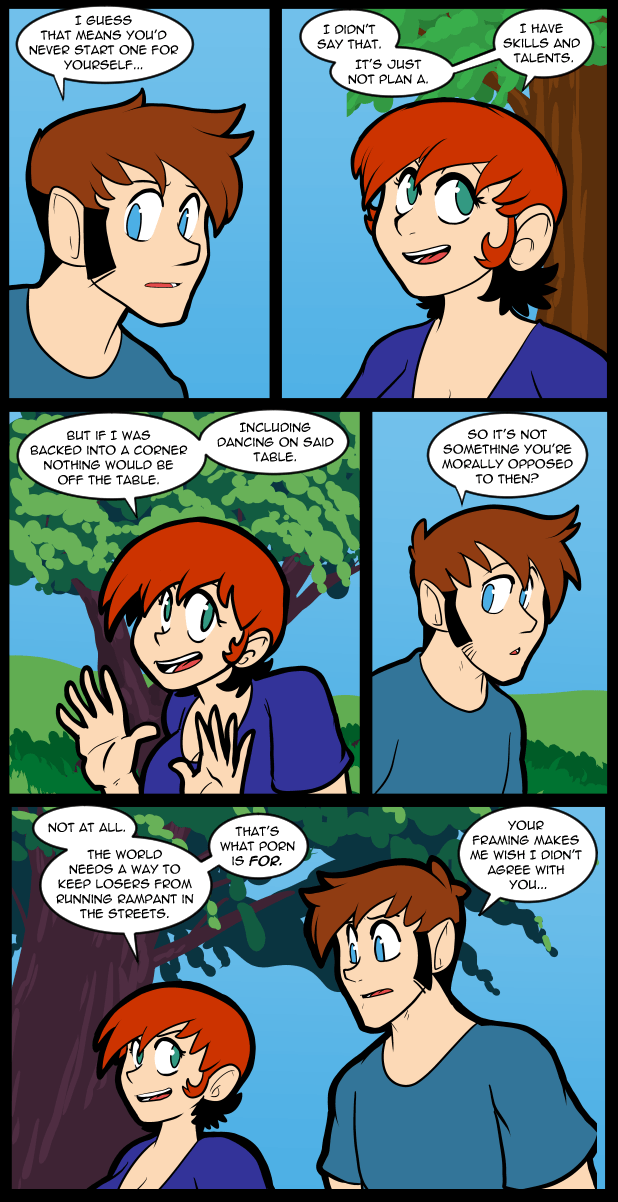 This is basically Carol flirting. Teasing is her way of trying to connect with people. It’s similar to Thomas but different. Her style is much more mean than Thomas. To the point that it doesn’t read like flirting, but she’s playing. The more Thomas reacts in this sort of serious way the more she wants to bat at him and see what happens. Thomas is more playfully inappropriate when he does the same thing. It’s such a minor difference but it’s what makes up their styles. The subject Thomas brought up is sort of naughty and Carol wants to see what Thomas’s reactions to her responses will be. SHe probably doesn’t even consciously realize she’s doing it. It’s just how all the things that made her Carol shaped her to act. In combination with her internal makeup.

I dunno. I do know that I can’t identify it IRL. On the page here it’s obvious because I know these characters intimately, but for people I’m not familiar with I can’t read it at all. Probably because my default is to assume all other humans are waiting to attack me, or make fun of me, or do some other negative thing. That’s how the world trained me.

Yeah, your attitude towards sex workers is a bit out-of-date. You’re making a hell of a lot of assumptions about people that you don’t know.

No, he’s writing one character as having that attitude. People who can’t grasp the parameters of fiction in this way shouldn’t be reading it if it’s going to keep them awake at night grinding their teeth, Jesus.

There seems to be a lot of people who don’t grasp the divide between reality and fiction, these days. Not everything has to be the artist’s official position, nor does everyone have to make a political statement that then categorizes them somehow; much as I hate the expression “think outside the box”, it seems to be very relevant these days, what with all the people seem to think that way anymore.

Also, am I the only one who’s noticed that those who would usually be found in the pro-diversity crowd tend to leave out diversity of thought and opinion? Not even webcomic characters are safe, apparently.

My opinion on BF is that depending on how Thomas is written and his views typically express the views of the author. I am not sure if it’s true or not, but I consider Thomas as the Author’s self insert character. I think this arc though does illustrate the fact that even people you are close to you may not know where their views/beliefs lie until you actually ask or get into a discussion over it.

Then stop agreeing with her Thomas
This has made me kinda dislike Carol, even if it’s not completely canon. It’s a real shitty attitude. A lot of people turned to onlyfans during the financial low of covid. One person I know was on there is a funeral director. If I had the body for it I’d much prefer doing that work to busting my ass in a shitty minimum wage job… I guess my point is it’s just a really dismissive way to talk about sex workers.

If the entire cast agreed on everything all the time there wouldn’t be much of a story though.

That’s what I was thinking.
Calvin and Hobbes pointed out a similar idea:

Calvin-
why are these comedy (TV) shows filled with clumsy people, and annoyed people? Can’t they put well adjusted people, + non-klutzes in these shows?

Calvin’s Dad-
Yeah. Because a comedy, TV show- filled with [happy] + well-adjusted people, and people who don’t do slapstick, would be ABSOLUTELY HILARIOUS.

Patton or some general supposedly said,”If everyone’s thinking the same, someone isn’t thinking.” I think it’s good sometimes to consider an issue and decide what YOU think of it. Actually have a reasoned thought process to a personal, individual thought. Once you’ve done that, you may never have to share it. But, if you do, along with your reasoned thought process, you may change someone else’s mind who’s opinion was just based on which way the ideological winds were blowing that day. Don’t be surprised when people actually come to you for reasoned,(and perhaps unique) perspective.

A /real/ shitty attitude indeed. As in it’s a shitty attitude that people really have. Even people that are progressive on a whole swath of topics can suddenly become extremely conservative on anything sex-related.

If it makes you dislike Carol, then by all means dislike her as a result, but it’s a stance real people have, and thus I find it makes for good characterization. I don’t expect to be able to be on good terms with the entire cast though, and neither should you. Like Reggie exists in this comic’s world, it should go without saying

Look at everyone rushing to be head of the “but I’m hip! I’m with it” Sex work is real work” etc etc line. We know. Everyone knows. Everyone has made it perfectly clear that it’s in everyone’s best interests to not only know, but MAKE IT TOTALLY CLEAR everyone knows, or face the consequences. What a wonderful world.

This is A STORY, wherein different characters… have DIFFERENT OPINIONS, not just from each other, but in many cases from the creator. People jumping down his throat and wagging their fingers are evidently too simple-minded to apprehend the basic fact that decent fiction relies in a major way on presenting contrasting- often distasteful- viewpoints; that’s… one of the main ways “conflict” arises, or just “presentation of a character’s personality”. Grow up.

Thankfully no one’s used the word “woke” yet. Let me break that particular dam myself. :D

Carol’s opinion of OnlyFans might be considered in poor taste to some, but let’s be honest here… a LOT of people have views like hers. When the topic of OnlyFans ‘content controversy’ broke out into the social media platforms I inhabit, I was really shocked by people who I consider very progressive when it comes to sex, sexuality and sex work to have a *very* poor opinion of OnlyFans in general.

I could point out that writers, artists and all manner of creative types *also* use OnlyFans without a single tit to be seen, and that would be true. And if Thomas pointed that out, Carol could retort that those people get a tiny fraction of views and support compared to tits and ass… which would also be true.

So, my point? Mmmmmm…. hey look, is that an elephant over there???

Ooo good topic. *Readies flamethrower to melt some snowflakes.
Hehe as a financial supporter Of related works can say that there are a Huge amount of people using it as a main income. Like Country’s preferred job huge.