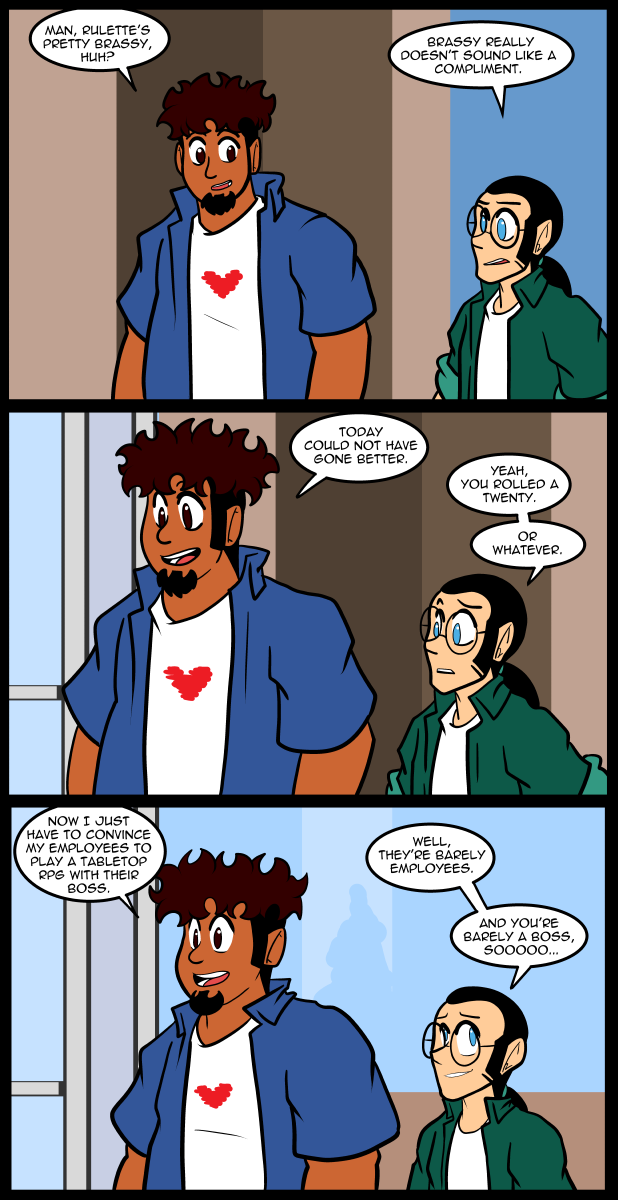 That goddamn heart on Mike’s shirt… Every time I do a page I forget it once or completely and have to go back and fix it. I really like giving their shirts personality, but fucking around with every little detail is always a massive pain in the ass. I always start things like that when I’m feeling good, then I hit a low point and it gets harder to maintain all the little shit I’ve started up. In all honesty, in the last couple of days my whole little system has broken down so I’m kind of frayed at the edges.

My hair is so long, and getting a haircut is such a fucking hassle, that I’m right on the edge of shaving that shit off. I don’t know why I bother with hair most of the time anyway. There’s no one for me to impress. I think maybe I just want to see my hair the right color before it all turns snow white prematurely. I’ve had a pretty significant amount of white hair for a while already, but it’s really getting with it now. Even my body hair is giving up on life at this point. I’m glad it’s white hair, like, pure as paper white, because at least it looks clean. You never know for sure what your hair is going to do as you age until it starts and I don’t feel like gray would have looked as good. No that white is so much better, but it doesn’t look so much like soot.

My hair is a lot like my grandfather’s in that it’s thin rather than bald in the front. It always looks like it’s threatening to go all the way, but never pulls the trigger. The longer it gets the more obvious it is. It doesn’t look good on me. Some people look fine like that, but on me it just looks like I’m in the really early stages of a bad sickness and I haven’t lost any weight yet. I’m sort of at a perpetual first day of chemo style. Not a good look.

It looks like it’s going to be nice and cool tonight, so I thing I’ll go out and get a few jugs of water just in case the world decides to heat fuck us all a few more times before it gives up for fall. I hate having to try and gather water when it’s humid, or hot outright, but we’re out. I think I gave the kid all my cash though, so I’ll have to scrounge for coins around the house. I’m sure I have at least a dollar in the truck so I can get, at minimum 5 containers. That will carry us along for a while.

Anyway, I’m still knocking out those new patreon sketches bit by bit. The large influx of new people last month set me back a ways, but I doubt there’s going to be a bunch of new people this month, so it should all settle into a nice equilibrium soon. I hope you all have a nice weekend. In case you’re wondering, the Teen has been very busy with school and her college classes are a big jump in difficulty from the ridiculous nonsense the high school had her doing, so it’s been a bit of a shock. The college is apparently does not stress the importance of arts and crafts quite so much…

I’d love to see more of roulette! I especially want to see her interact with Thomas and carol.

I’d rather have white hair than go bald myself. Thankfully, the. Possibility of going bald is low. The men on both sides of my family have really thick hair.

Crave, I was imagining you being a lot younger, like early thirties or so if I’m not offending you.

“Ah, but I was so much older then. I’m younger than that now.”

You tin she might take a shine to him? Such and introduction has often lead to marriage.

Marry him or barium, either way I suspect she will steel his heartl.

If she wants Mike to pursue her, she might have to test his metal.

Well that will be unalloyed fun for us at least!

Do you think Rulette has a good temper?

Well her whit does seem to be well honed …

I guess so.
I suppose she won’t foil his plans.

I am happy to leaf that decision in Jackie’s capable hands :-)

What kind of RPG games does she like?
I hope she’s not into blood and ore. :D

Roulette is an awesome character, but you know I am in for the haul no matter what. Personally, buying a hair trimming kit and either doing my own head or having a friend/family member do it was a fantastic investment. I keep my hair at about a #2 and do it myself almost all by touch except around my ears. Spent about $50-60 on the kit and i can get like 3-4 years out of that kit. I am admittedly bad at keeping the blade properly oiled so I eventually have to swap them out.

I was going to say, buy a pair of clippers, sit on the porch, and turn the Teen loose on your head. Problem solved. :)

It’s not the size of the dog in the fight…

Careful Mike, rpgs are a gate way game. Before you know it your dropping 500 for a new warhammer army

My wallet just cringed in agreement. Different games, but still.

Part of why I switched to Warma-Hordes. No figs needed (technically, just the bases), plus smaller fieldable armies, and a begninner price point thats accessable to new players (as opposed to the $30+ rule book, $20+ faction book, and $100+ minimum fieldable figures for even a bad army that Wah-hammah runs…)

Also, they keep screwing over the Fantasy game. Which is a shame because they have a faction that lives in my forest. (Athel Loren)

If you shave your head, no one will know that you’re bald.

Jackie has asked, on twitter, if paper routes are still a thing.
Well, if Wikipedia [R] is to be believed, in their article about paper routes, titled, “paperboy”:
paper routes, done by [kids under 18-19?], are still a big industry, in the nations of:
UK, USA, Canada, Australia, New Zealand, Ireland, and japan.

Awwwwwwww, I caught up :(

Seriously though, awesome comic, I found in a few days ago and have been working my way through the archives. Adding it to my watched list :)

So, I just caught up on this comic.
It’s definitely earned its place in my heart; so much sound logic and great life lessons. The wisdom Thomas and the others spew has benefited my life. So, thank you for making this great comic.