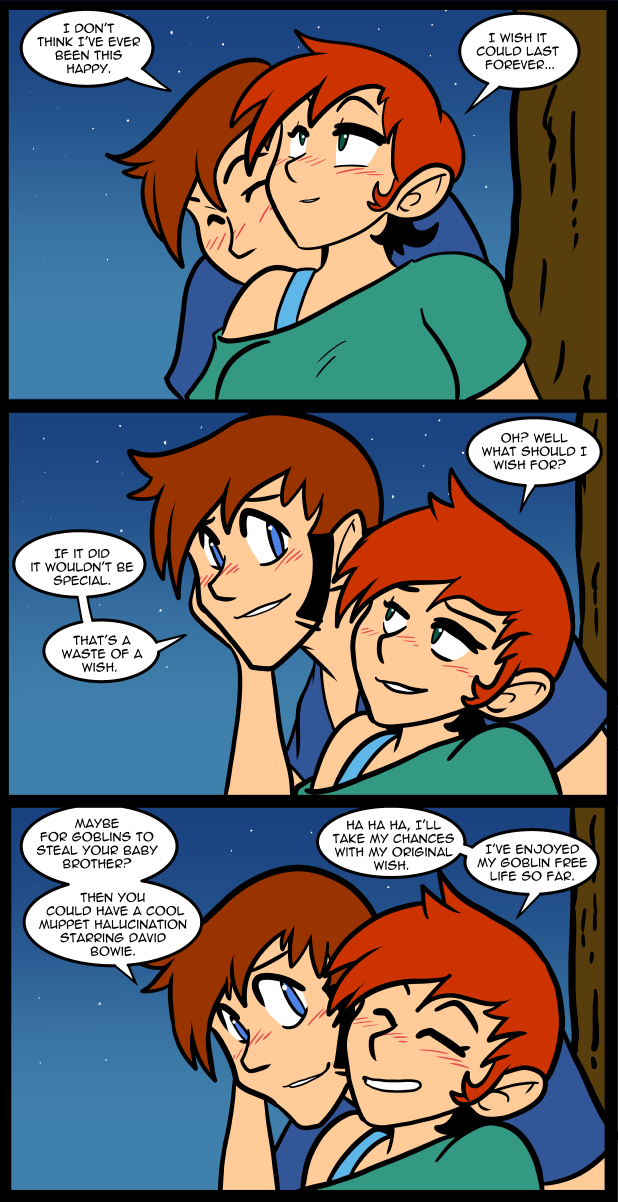 Do people remember Labyrinth? Do people still watch it? I went through a few versions of this and ended up with this. I dunno. I may change it. I laid out the first version, then decided I didn’t like it. Then I changed it again. After that I went on to the next page, but decided I still didn’t like it. Now I’m looking at this and I don’t like it either. Every so often you get a page like this where you just can’t decide what you want to do. Back when I had a week of buffer I could afford to dick around on something like this, but right now it’s a luxury I don’t have. The whole dentist day threw me off, not just in a time sink sense, but also in that I’ve felt a little disconnected too. Maybe I’ll add one more panel after I get the next page lined out. I dunno. When you come back on Wednesday rock it back one page and see what I decided. It can be an adventure for both of us. XD

Okay, do you guys know about Clock Tower on the SNES? Or whatever the Japanese equivalent is called. The main character is clearly inspired by Jennifer Connely, who, strangely enough, was the star of Labyrinth. I wonder if that’s why it didn’t get released in America. Maybe I’m just imagining things, but the Japanese seem to have a habit of doing stuff like that. Like Mike Tyson being clearly referenced in their version of super street fighter 2. To the point where they swapped the names around for the bad guys. They called him Balrog over here but in Japan he’s M. Bison. Likness rights are not as big a deal over there apparently. A huge number of the cast members in One Piece are absolutely inspired by real actors. He straight up points it out for the most obvious ones and never gets taken to court. Apparently nobody cares. Anyway, check it out on youtube and tell me if you think I’m right. The whole game is like Labyrinth if Hoggle was a murderer. He even has hedge clippers.

Who ever designed David Bowie’s costume in Labryinth was way too into his crotch.

I’m pretty sure they were as in to his crotch as much as most of the world was/is.

I recall that David Bowie’s costume itself was really into his crotch. O.o

Still got Labyrinth in LD somewhere around here.

Still love Labyrinth, in spite of the “potpourri package”. If you think it’s big on the tv, it’s terrifying on modern theater screens.

Mick Jagger of the Rolling Stones was allegedly a big fan of his crotch, and likewise Bowie was allegedly a fan of his…frog-like lips? Let’s just say that whether or not the gay affair was true, their 1985 rendition of “Dancing in the Street” did not help with the public’s assumption of their relationship level.

Heh, Clock Tower. A buddy translated that one.

And about Labyrinth… yeah, it’s still a thing. A new remastered version is about to be released on Bluray, in special packaging and all. So yeah. People still care. Parents will still inflict the Bowiecrotch upon their children.

Followed by Ed saying, “No, they said it exactly how they meant it.”

My nephew nicknamed one of our acquaintances “Hoggel”.

I love this couple. They are just sooo cute. ^_^

Lootcrate just had a shirt with the Labyrinth poster on it last month. Just an FYI.

I really like the first panel, I think you should make it a wallpaper screensaver ??

you know, you remind me of the babe

The babe with the power.

Remind me of the babe…

Some people don’t like the song?
Shoot. They must have feelings like: “Sister, sister, take me out of here.”

Do people remember Labyrinth?
YES WE FUCKING DO

Do people still watch it?
YES WE FUCKING DO

It should be “starring” in the last panel, not “staring”. Please don’t hate me, Jackie!

No hatred from me, fellow Grammar Nazi. Welcome to the fold!

We have to be careful though… https://www.youtube.com/watch?v=N4vf8N6GpdM

After Bowie’s untimely passing, EVERYONE was remembering Labyrinth. My favorite Labyrinth remember-er: The Nostlagia Critic. :-)

David Bowie plus muppets. What else do you need?

You need Gonzo, then it would be perfect!

And maybe add, Muppets that look [remarkably] like: Darth Vader, Leia, the stormtroopers, and the 1970s’ Planet of the Apes’ apes.
[ Apes’ apes? That just sounds wrong…somehow].

David Bowie and Alice Cooper, as main characters in a Labyrinth film?

I WOULD PAY to see that! That would be awesome. : )

I think once you’ve published a piece of art, it’s done unless there’s something very wrong with it (or a very small text error). Leave it up. It’s good.

There is a small collection of movies I decided I had to have a few years ago. Labyrinth is definitely on the list, as is Princess Bride, Brazil, Willow, Neverending Story, Dark Crystal, Adventures of Baron Munchhausen, and Legend (to some degree, although I felt it was a Labyrinth ripoff). There are a few others, but you get the gist.

Feel free to contribute if you think something has to be on my list.

A little different, but Delicatessen-it’s in French but that won’t matter, and V for Vendetta. More in line with the others-Stardust.

Sorry. Missed that NES was in your post. What about Buckaroo Banzai?

I saw BB, but I was manifestly unimpressed. I’m not sure what turned me off, except it seemed to be about 40 minutes too long.

Goonies! It’s my (former) neighbor’s favorite movie; I even bought her a DVD when her VHS wore out.

Hmm. One of my stories has been compared to Stardust, but I can’t see it. I liked the movie okay, though. Just not cult-y enough, I guess.

I haven’t seen “Stray Dog…”, but I really liked seeing the Red Spectacles.

Depends on who you ask, I guess. LIKE ME: The answer is yes, I remember Labyrinth, but only because it was MY MOVIE, back in the day. You know, when a kid has that one movie they watch over and over and over. I had that movie and the He-Man movie on one tape, and I used to watch ’em a lot. To this day I still love Labyrinth, and just so happened to marry someone who loves it as well, so we watch it every so often.

Labyrinth got a lot of TV time after he passed

Mike was his name in Street Fighter 1. They changed it up for 2 to avoid lawsuits.

Calling him “Balrog” was appropriate.

Kind of like that comment about Dennis Rodman at the end of the first Men In Black.

They just put out a Labyrinth board game. So relevant reference.

I always liked the Labyrinth, but I needed that escapist fantasy… Gonna take me away forever??? Um, ok..should I pack or? Also, I like muppets. The Fire Gang really freaked me out, though their song is the best.