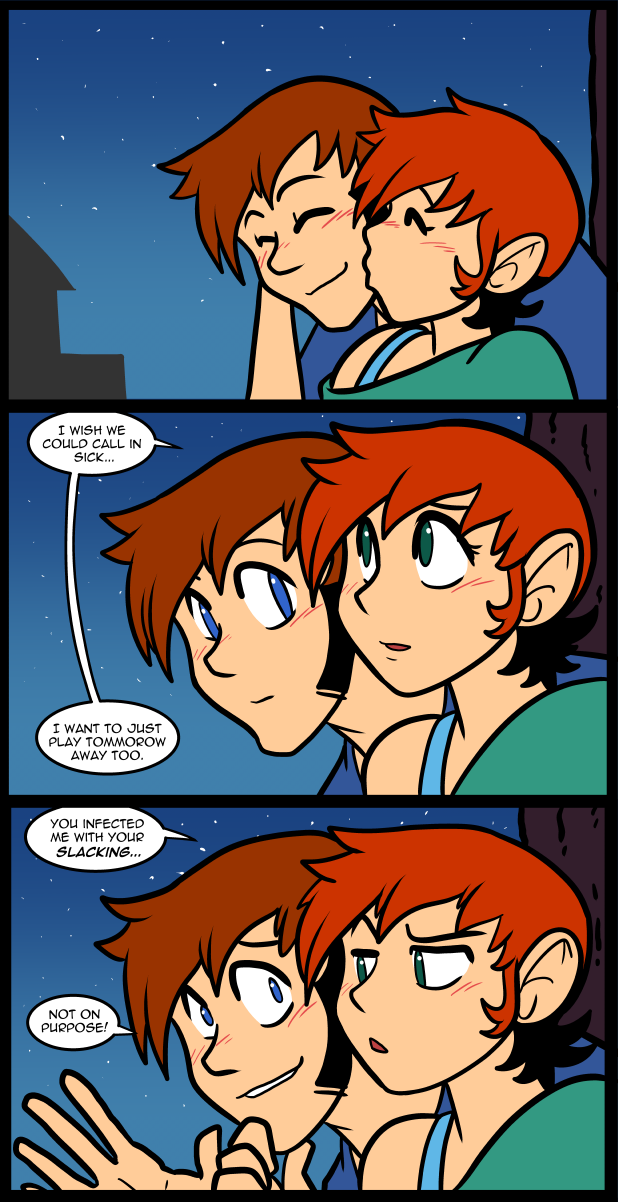 These two have a very Han Leia vibe if you think about it. Except I won’t undo all of Thomas’s character growth after 30 years to facilitate a franchise reboot that apes the original film beat by beat… probably. Carol is pragmatic. She’s not against the idea of un per se, but she conforms more rigidly to a set of rules for when it’s appropriate. She’s not above breaking those rules, but compared to Thomas she’s much more traditionally adult in her mindset. She’s actually had to rely on herself and work to get what she has whereas Thomas tends to get handed things and always has some sort of safety net. He’s immature. Deeply so. In a way that he can hide fairly well though. Being clever can make someone seem mature, even wise, but it can also shadow immaturity. They are a good match in several ways, even though Nina would also be a good match in a different way. Carol is bold where Thomas is dominated by fear. She is confident in a real way where Thomas apes confidence; quite convincingly, but still apes it.
I suspect that Nina would coddle Thomas in a way that Carol would/will not. It’s hard to know for sure because Nina is also more self confident than Thomas too. At the very least she would put up with his nonsense for longer, which is probably not good for either party in the long run.
Thomas and Jess would be a glorious disaster. To the point where I’d almost like to work it out just to see what two schemers with way too much arrogance would get up to. Even if they don’t date it will be fun when they end up with a common goal. It will be like two children egging each other on. Although in that situation Thomas would be the voice of reason, which is a very different dynamic.

As you know I really like Transformers. I’ve been trying to get a toy of the medic, Ratchet, since forever. Every version of him in the regular line has been exclusive in some way so I couldn’t ever get one. I finally asked David Willis of Dumbing Of Age how a person could get a combiner wars version and he told me there’s a chance that the Japanese release of the Sky Reign set may have one. So I’m going to save my pennies and try to get it. I suspect it will be at least $100, so that’s in the realm of possibility. I don’t know who else would be in the set apart from Sky Lynx, who is the torso robot for that new combiner. If they’re ones I don’t need maybe I can sell off the other limbs. In any case this is a tiny goal I’ve set for myself. Now I just have to wait and see when they make the set in question and preorder it to lock it down. Ratchet is one of the original guys and he was always important since he was the crew medic. The main one. I made due with Hoist because he was listed as an assistant who was very capable. Which is probably why I like Hoist inordinately. I’ve got him though. Now I just need Ratchet to help fill this emptiness in my soul… O_O

Teen corner.
well well guess whos back? the irritating teen that’s who! I’m sure you all haven’t missed me but just in case you’re curious about my not so interesting life I’m here to give an update. I officially have two days left of my junior year and then I am a senior. I already feel the senioritous kicking in if we are honest. I feel as if adulthood is suddenly closing in on me as I approach the end of my junior year which flew by really. I know I have a whole summer and a year before I graduate but suddenly the need to apply for scholarships, discover what I want to do in life, and get my shit together feels as if it is suffocating me. I’m terrified and excited for what ever is to come. I’m not sure when I last posted but ill try to catch everyone up on the boring details. I was in a play the secret case of Sherlock Holmes as dr.sdyney fruedley. a psychologist at a mental institution. it was an interesting disaster considering I was basically the only one that knew my lines everyone else just said random things. it was a disaster really but it was fun and I got an award from my teacher for best leading actress so go me I guess. I won second place for a painting in the otero art show and got a few ribbons for art from my school. I chose my schedule for next year which consists of college classes offered at my high school and a few electives. my goal for this summer is to try and lose weight and get in shape so I don’t die when volleyball starts in august so wish me luck their. high school boys are still assholes by the way I was made fun of this week by a few certain boys not to my face of course for a group name the teacher gave me and me group for a game “peppers plus” they found this hysterical since I’m sooo plus sized. hilarious right? they are so clever. I didn’t let it bother simply because they suck and I know I’m a big girl. I’ve broke up and gotten back with the same guy a few times which has been so fun. relationships are complicated but we are working it out I think. I’m fairly excited for summer simply because I’m tired of teachers and getting up at five thirty in the morning. I just want to sleep in already. other than that my summer will consist of Netflix, maybe driving, reading, sleeping and annoying J.T.. I would like to get a job but I cant until my car windshield is fixed because I have to be able to drive myself. ill probably hang out with people eventually and drag my big butt out of bed to work out with the motivation of my best friend of course. I also hope to take my senior pictures so they are out of the way. with only two days left of school and one finale tomorrow I’m feeling pretty done with everything. everyone is grouchy and on edge including me. I have definitely been a bigger bitch this week sorry to anyone that has witnessed that. I wrote a seven page essay for my biology finale and an essay for my English finale I also have edited about 9 of my classmates essays. apparently I’m the go to girl for writing not sure if I like that or am more annoyed about it. regardless I cant believe my junior year has passed by so quickly. people always say you’ll miss high school and I’m finally starting to believe that I am definitely regretting not doing more and participating more throughout high school. I hope to do as much as possible this last year. but for now I’m already in summer mode which means swimming, sleeping and lots of fun at least I hope. I think ive pretty much caught anyone who might care up on my uneventful life so I will bid you all a goodnight.

Aw man Teen droppin’ bombs outta nowhere. Gotta give the girl respect for coming to understand reality before her peers. This is why she’s going places.

What would it be like, if Thomas and Jo were a couple?

I don’t think they’re very compatible. If it somehow came to that they would be a hot mess. Too much fear between the two of them. They’d be lucky if they could get by every day.

While we’re on the subject assuming she could tolerate him, what would Reggie and Nina be like as a couple?

Yeah, I think that would degrade into an ‘ick factor’ issue, especially for Nina.

So good :O @Crave can I pretty please get that first panel as a background?

Jeff Foxworthy recommends calling in with diarrhea. It’s believable and no one wants the details…

“Hey Mike, I can’t come into today ’cause I’m hung over on love…”

@Jackie, I understand that “Emptiness in my soul” you described. I think it’s an effect of of a mild case of OCD. I’ve been collecting a lot of music lately. Many of the older albums I’ve bought are parts of sets, and putting them together is usually a rewarding task. Sometimes, though, one disk in the set is a ‘completer’ with a short print run, and they seem to be printed on unobtanium. Idiots on eBay and Amazon hawk the rare disks for $200 (and up). I’ve taken to faking them by building an MP3 album out of stuff I already have or buying missing tracks on Amazon. It works, I can’t tell the difference, but it doesn’t feel right.

On the bright side, about 10 years ago I bought one of those blow-molded plastic Craftsman tool kits at a garage sale. It was an empty 1/4″ socket wrench set; it had gotten seriously wet (there was a lot of rust staining), but for 50¢ I washed it out and filled it up with a set of sockets from Sears Hardware. Only problem: the ratchet was too new to fit into the box. I just dealt with it for a decade: eBay was no help, the ratchet was considered old enough (mid-1980s) to be ‘collectable’. $15 starting bids for rusty junk ($9+ to ship) and bidders beating each other over the head to snag it at the last instant.

Last Sunday, I went to the MIT Flea Market. One of the vendors had the exact ratchet I had been pining for, for $8 (talked down to $7, on account of light surface rust). A spray of gun cleaner and lube flushed the rust spots off the thumb wheel.

You should sell Lego mini figures instead. They increase in value better than gold.

It’s always cool to get a good deal on something you want. I hover around eBay like a vulture.