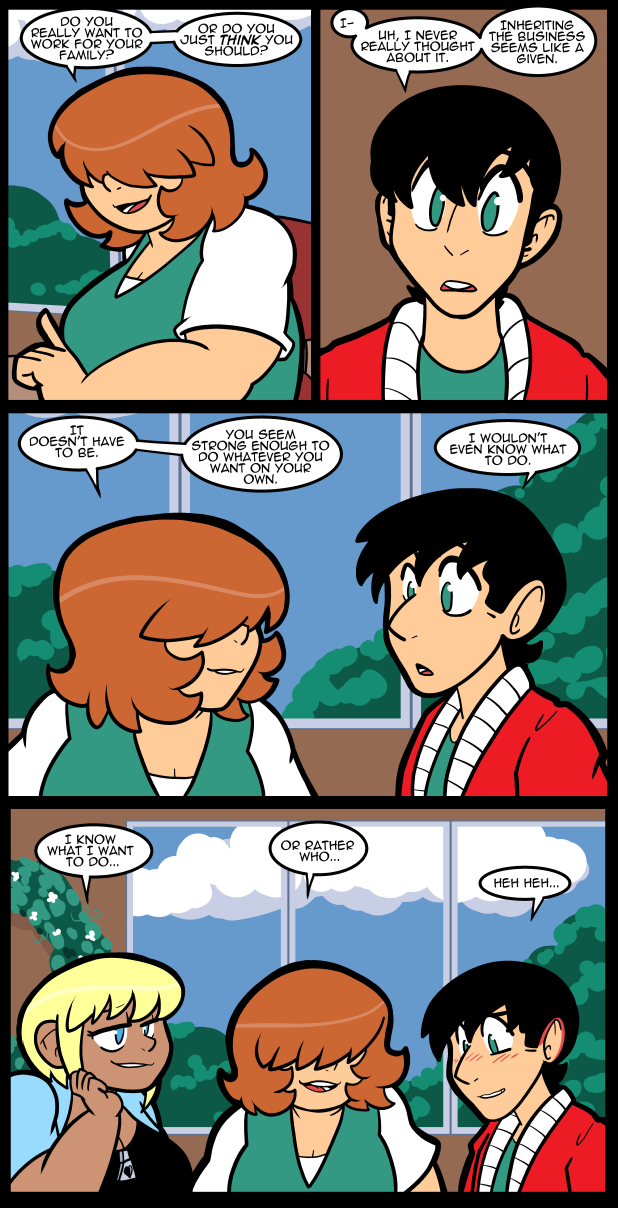 In light of the changing face of monetization on the internet please warmly welcome the permanent Patreon link in the blog. I can’t drag my feet about monetization anymore, what with the loss of project wonderful & gradual loss of ad value in general. The image link is still on the sidebar, but no one really notices it. I may start adding other links in the blog permanently as I think of stuff to add. Honestly I think most of the blog readers are already patrons, but who knows. I’ve never been good at promoting myself, so maybe I’ll just listen to other people & see what happens.

You know, I wonder how people would be reacting if Reggie was the aggressor in his interactions with Maddison. There’s so many layers involved in the interaction to break down. As it is he’s not used to being pursued. With Nina he was the one chasing, but he was pretty respectful, & didn’t come off as creepy. He was clear with her that he liked her, but wasn’t pushy to the point of not being able to work with Nina. He also didn’t expect anything from her if he was nice. Of course I can’t remember every interaction anymore & I may be remembering it in a better light than it really was. I know he was mean spirited about it with Ed, but he still held to his morals.

The other day I watched a few minutes of some 80s movie. I forget what it was, but I actually noticed how the young male lead never took the agency of his object of desire into account. I never would have noticed that in my youth. That was normal. The idea of women as a prize for good behavior was just the way things were. Not in every film obviously, but particularly in movies aimed at young men. Strangely, movies you might not expect break this trend. Tron, for example, only has two (arguably one) female character, but she’s always treated as an intellectual equal to the male cast members. The idea that she’s not as smart as them isn’t ever entertained. Robocop’s partner isn’t treated as a token hire. It’s just taken as normal in the context of that film that a female cop is equal to any other. It’s never addressed at all. Conan The Barbarian, Ghostbusters, Caddyshack, & Terminator also generally present women as beings with agency. Anyway, it’s interesting to look back over some of this stuff through the lens of the now.

Called it last week. Reggie has shown to be quite competent when he’s got good support. Don’t know maybe he’s the true key to this story’s happy ending

I do, but google actively blocks project wonderful and anytime I try to visit it, it warns me not to go, which makes me hesitant at all, I do actually try to click ads you have that seem interesting but most of those google kinda blocks you (regardless of adblock or not)

That’s all part of the larger problem. Views are about as good as it gets. Clicking through is very rare.

Clicking through is rare all over. The notion that viewers of any media would voluntarily subject themselves to advertisements is hard enough to swallow–that’s why television forces them on the user and requires the user to work to avoid them–but voluntarily subjecting themselves to advertisements that may actually destroy the device on which they’re viewed at random is too ludicrous to bother refuting. That’s why we need to go back to the OLD style of advertising: you buy a banner or similar space for a set rate.

As Chrome gets more aggressive with site certs and security, it will become more common that you will get the warning messages that you’ll have to click through, and on occasion for very old certs, it might not let you click through at all.

There’s a lot of false sites out there that are have bad certs, and this is one way Google is trying to protect you and themselves from security issues.

You can always get past a bad cert manually if you really want to, but it’s not a good idea. There might be a DNS hack or God-knows-what going on.

And honestly, if PW can’t manage to keep their SSL up to date I wouldn’t trust their competence in anything security-related. (If Google is dicking them over, that’s a different story.)

Well, this is sad. I got curious about Project Wonderful, found its Wikipedia page, and then its goodbye article. This gave me a handy list of sites to whitelist on uBlock, and I only found out maybe a month before it’s over.

I don’t normally trust ads, even the “trust us, our ads are benevolent” stuff because it often turns out they aren’t. Any ad provider that limits advertisers to images and links should really be obvious about this so people know they can actually trust it. Some way to confirm this limitation independently and easily would also be nice.

for what its worth, take it as a stranger’s comment, I’ve been following crave and betweenfailures for years and never once had a problem having this site white listed. clicking ads and going to other sites is a different matter, but all ads on this domain have always been fair and non-intrusive. Most of them are ads to other comics with a few car/insurance ads now and then (and steam ones which I really don’t mind and try to give click revenue for)

Rumour has it that Mozilla is trying out a scheme of judging ads on their objectionableness. The idea is to block objectionable ads by default and leave the others alone.

It actually worries me how much webcomics are being forced to the internet cartels.

It’s going to get worse. There are virtually no rules preventing it from happening.

You should put the webcomics voting link too. I would help with advertising BF and thus increasing the number of viewers and Patreons ^^

It’s perpetually broken, but I guess I could.

The account associated with the link wasn’t created by me and they can’t fix it without the original user’s information, so I can’t put any voting incentives there.

Can’t they delete it ? If YOU didn’t create it, they should have the right to. I mean, it’s YOUR comics.
Or maybe you can create a second one called ‘Between failures” with updated pictures and put that link here ?

Anyway, I don’t think it’s that problematic that you can’t put new incentives

I asked once but the hassle of what options they presented were too much versus the tiny rewards.

Sorry for the Patreon stuff, I fear the day these new rules will make you stop working on BF and leaving it with no ending or worse…a rushed one

I like Maddison in the last panel. She knows what she wants and is going after it. ;-)

You know, I wonder how people would be reacting if Reggie was the aggressor in his interactions with Maddison.

These days, who can tell? Behavior that would have been perfectly normal even ten years ago is grounds for having your life ruined today.

Well, technology has driven that change.

1. The Internet – with the advent of the webs of the world-wideness, the potential for everyone being able to say their piece and put pressure on big businesses has grown exponentially. People bitching about SWJ are the same people who once embraced the Internet. They just weren’t prepared for the consequences. The 80’s didn’t have a platform for everyone to be heard. Women in particular didn’t have a lot of options for organizing and promoting equality, especially commercially. Now, they have a ton of options, so the 80’s like behavior is changing.

2. Digital distribution – with everyone relying on the Internet to be their window to the world, movies are undergoing an evolution. To stay competitive and keep theaters open, movies have to appeal to a broader audience. Not appealing to a broader, more generic audience that is becoming more progressive is seen as suicide.

Example – Star Wars. Star Wars will not survive being a very male-oriented and unfriendly to outsiders property. Granted, the writing has not been very good on the last two core movies (as one person said to me, “I’m not sure where they are going with the core story” which is hurting the current series), but SW fans who are all “OMG SWJ IS RUINING STAR WARS” are basically proclaiming their bigotry which is having the opposite effect they want it to. People are now running to the defense of the SW core story, encouraging more equality driven stories. But that’s the nature of the Internet, so … accept the change.

I fear the SIWs more han the SJWs. The Social Injustice Warriors.
Or should I call them the Social Oppression Warriors?

Matthew Boyd’s comic, ” Three Panel Soul “, had this idea, for how artists + illustrators, can make a lot of money:

That’s been a thing for decades. The pool for that money is much smaller than people realize. If you can get popular enough in their community it can support you though.