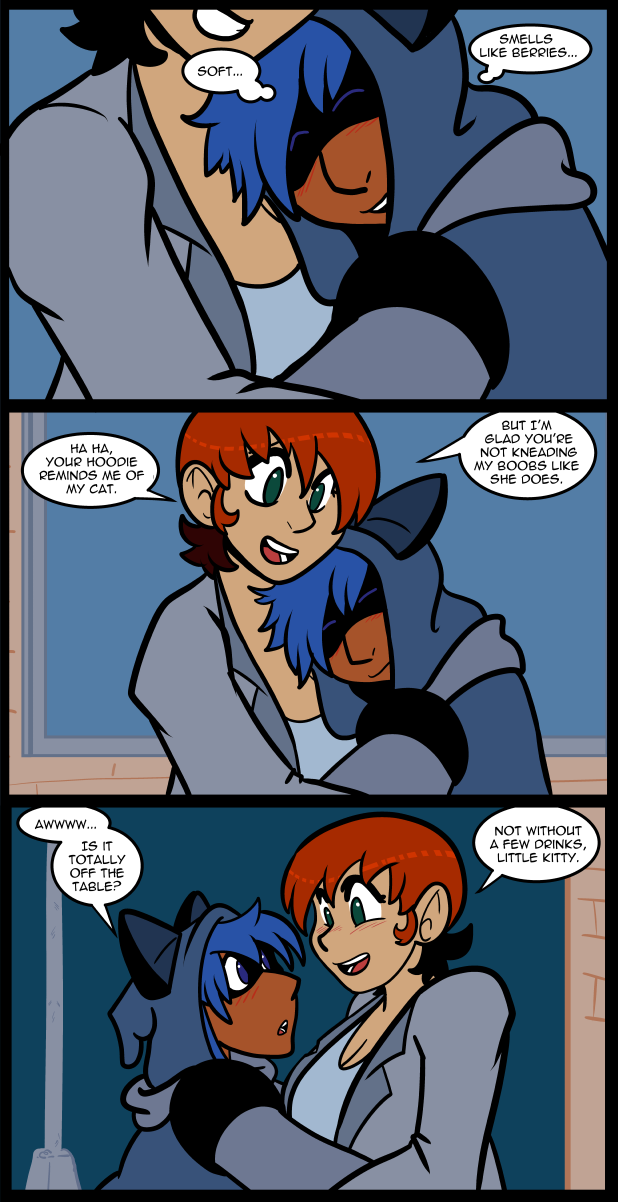 Jo sometimes can’t help herself.
We haven’t had cats in the house since Claws died. I always sort of liked when he would do the kneading thing on me, even though he got too into it sometimes and would claw me a little. It’s weirdly calming. Apparently for both parties. Claws did it a lot more than is usual apparently. He was from a very inbred family of cats but he lived a really long time. His sister Snooks, who we had at the same time, died much earlier than him. She was kitten sized her whole life. He was a little big for a cat. Not like the feral ones that live around here. they’re mostly smaller. Regular cat sized except for a few who get pretty big.

Okay, so I got StarCraft running on the surface with a little help. The only way I can play it for more than a few minutes is if there is a fan blowing directly across the back of the surface. It just doesn’t have the ability to cool itself well enough apparently. I got it used, which is how I afforded it in the first place, and there were signs that it had overheated to the point of total failure before it was refurbished. There was some sort of scorching near some of the exhaust ports. I assume that’s why it was originally returned. I don’t know what the previous owner was trying to do, but it must have been impressive, and beyond the capabilities of the system. I’ve never had a problem with it overheating unless I use tumblr, or Deviantart. Apart from those it can run a lot of things at once seemingly with no effort. It can run starcraft easily too, you just have to put the fan near it. It’s not like I intedn to sit around playing it all the time anyway. I just like to play a round occasionally for whatever reason. It wasn’t designed with a touch screen in mind so I have to stick on the keys and use the wireless mouse I have for various other programs.

My actual PC can only barely run starcraft 2. It was the first system I had that could actually play a PC game that new the day it came out. At the time the system was new and designed specifically for my art programs. Photoshop used to really strain my systems, of course now I use Manga Studio and it barely requires any resources at all in comparison. Photoshop priced me out of its market. Once CS1 stoped working reliably I had no other options. Manga Studio was something like $50 when I got the older version compared to $700 and up for PS at the time. They do a subscription service now that really annoys me, so I’m glad someone came along that could do what I needed so much cheaper. Although I do miss the little script thingy I had for shading. That really made it harder to do that again. If there’s a way to do it in Managa Studio nobody I’ve asked knows it.

My old drawscreen still works, but it doesn’t have certain features that the surface does, like touch controls. It’s amazing how much just being able to zoom in with your fingers improves things. Of course the Surface is much more floaty when you draw on it. Even with a scratch protector it glides a lot more than on a Wacom. The controls aren’t as precise either. Well, they weren’t before they dropped support for my ancient one. Now it’s much less precise than the surface and the control setting interface doesn’t work. It stopped working properly with 7 and windows ten essentially killed it. Wacom no longer supports my version either. even the legacy drivers won’t work properly. In fact I researched my exact model a while back and apparently it was mostly sold in Asia. I’ve tried to use the corresponding drivers from the Asian language version of the site, but they don’t change anything, although there were two or three versions you could try in addition to the English ones at the time. Windows tries to make it work with their drivers automatically and they sort of do, but I’m pretty sure it thinks it’s supposed to be a touch screen and I can’t convince it otherwise.

Honestly I miss using it sometimes because it had a really good swing arm that I could rest my hand on to stabilize it. The surface can’t be mounted on it unless I were to make some kind of holder for it. I’ve looked for a dock for it but if there ios one out there I haven’t found it yet.

When I upgraded the PC to windows 10 it also forgot how to have two screens at the same time. One day the bigger screen just turned off and wouldn’t turn back on. Never could figure it out. It was a real shame too because it was way bigger than the surfaces screen and I liked looking at the internet with it. I never had time to try and fix it what with getting sick and everything. Maybe one of these days I’ll get it back out and try again.

My sister, the cat person (I mean, she’s professionally trained), says that cats kneading on you really is meant to be therapeutic. It’s one way they show they love you.

Then my cat reeaallly loves my sarong. He likes to pretend the tassels are nipples, too.

One of the cats I used to live with would knead me to wake me up. I don’t have Apnea as bad as Jackie but occasionally either due to it or just regular Texas allergies, I would have a hard time breathing in my sleep and the cat would wake me up. Luckily for me, the front paws were declawed, unlucky for me, the back claws weren’t and as soon as I would move, the cat would dig in for purchase and then leap off to hide somewhere. Yes, I know some people don’t like declawing, not going to debate that with you, weren’t my cats, I didn’t care.

There is probably a connection between me not being a cat person, and me finding being kneaded by a cat a bit annoying – “Look, creature, I’m not going to get any softer because you do that.”

I am still rocking win8. Can’t do 10. I finally have all my ancient shit working with it.

Phhhbt! I never saw the need to downgrade beyond XP, myself.

There is a way to set up dual screens with ten. I can walk you through it sometime if you’d like, provided you still have me on skype.

For a mount for the surface you could try using one of the universal four point mounts. They grip well enough and I think you could find them with a vesa mount.

Where did Nina go?

I bet you could figure it out with your Columbo like detective skills.

Hmmm … she was backing off to take a picture, but now she’s sprinting for the nearest liquor store?

Welp we all knew jo wanted to hug Carol for some time now.

For the multiple monitor issue, try the windows key + P. It has 4 settings. PC screen only, duplicate, extend, and second screen only. I am betting it is set to the first, try hitting it until it selects extend. It might take it a second once it is selected to make the change.

Don’t forget to adjust the system’s monitor layout (just drag the “1” and “2” rectangles around) to reflect where the physical monitors actually are relative to each other. It’ll make it much less annoying to work with. :)

Windows 98. Those were the days. I never needed more than 256MB of RAM with those systems. I didn’t upgrade to over 1GB until I played WoW.

I miss Unreal Tournament and Battlezone 2 from that era in my life. Of course, Blizzard kept updating their games so they would continue to run on new systems. I finally had to tell myself to never play Diablo 2 anymore. It would be years later before I quit craving it.

Now, I’m trying to wean myself off of video games. TF2 and Terraria will likely be my swan songs.