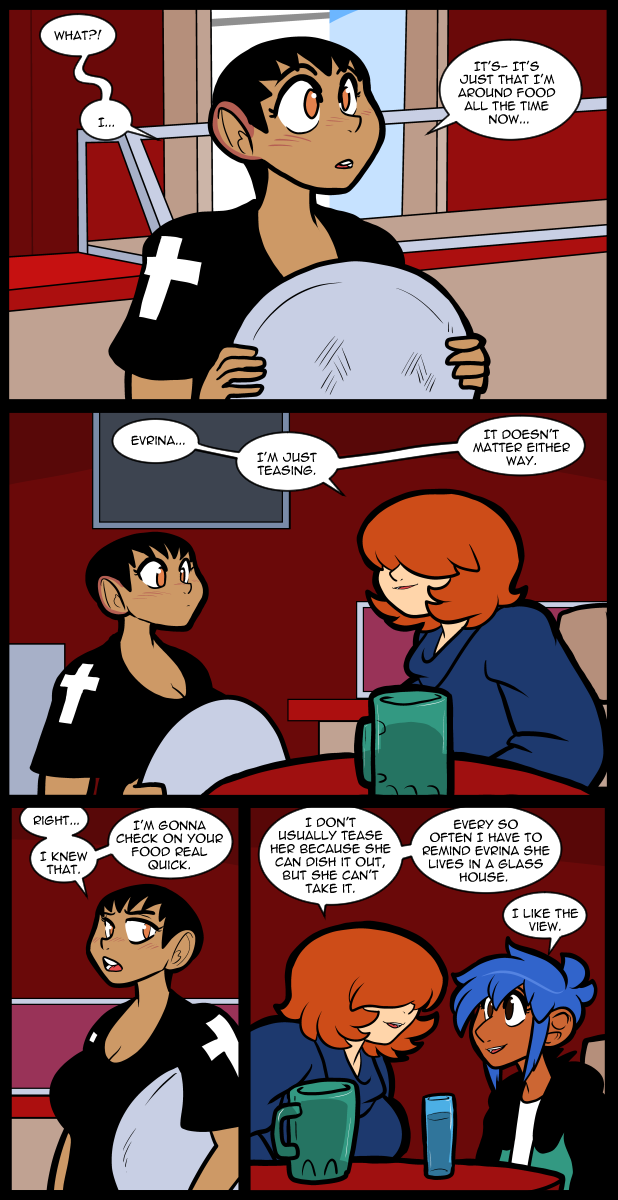 Evrina is a classic bully. A little push back & she starts to fold. With Alex it’s a little different because her mean comments are part of their relationship that Alex accepts as part of Evrina’s personality, & she knows Evrina doesn’t really mean what she says deep down. Getting a an equal response, from Alex especially, throws her off her game. Evrina doesn’t always register how mean what she says is. The irony is that if anyone else had pushed back it wouldn’t have had much effect. She actually cares about what Alex thinks though. It’s a strange dynamic that I’ve seen many times. It would be safe to say that I have a lot of Evrina like tendencies. It is difficult to be my friend too. I think that’s one of the things than is an important difference between a friend & an acquaintance. Friends know when you don’t mean it.

If you can’t take some trolling you shouldn’t walk on the bridge. And if you troll expect to be trolled.

Course, some just troll to keep people off their roof.

Trolling is expected in life but it’s no justification for it.

Ask not whom the troll trolls. They are trolling thee.

I am a proud follower of this comic for many years now and I will never leave because this level of dialogue is to die for. I’m going to be looking for an opening to use the glass houses “I like the view” line for years xD

I expect a report back

I wonder- maybe, partly, Evrina’s bullying comes from a fear of HER [being bullied or being severely emotionally hurt].

Maybe it’s sort of a tactic of: if I am a dog/hound + I see a big group of dogs- if I jump into the yard, and scare them off with a lot of barking, then I prevent them from getting a change to hurt me.

Oh man. When that person is your dad it’s an interesting thanksgiving.

Have we ever seen Evrina blush? (I may have to do some archive digging.)

Maybe in the furry arc, but I couldn’t swear to it.

Oh noes, the furry arc! Don’t make me go back there!

No one is asking you to wear a collar and dog tag. Don’t panic! It’s all harmless fun…until someone asks you to fetch a newspaper.

Evrina doesn’t blush in the furry arc, but we do have these blushes:

I recall her blushing when she saw Nina again. When Nina was kind of Goth-like and referring to her as Little Mouse.

To be honest, who wouldn’t blush?

Hey, I am rereading the comic and actually came across the one you mentioned. Good recall!

Evrina may be one who gets on a roll and doesn’t always know quite when to stop.

Does anyone know what can cause that?

Are those shoulder crosses meant to be detachable? Because Evrina seems to have dropped one in the first panel.

No, it turns out I’m just a regular human & sometimes make mistakes.

It’s only sometimes, that Evrina is at cross purposes,

Jackie,
Dear Heavens, I just Love that first panel. That look captures or rather projects what you have led us to believe she is feeling, gah, it communicates so much with just the face. And because they are true friends, having stunned her prey, she won’t go in for the kill, even though no one would blame her… Ervina might deserve it,but no, they’re friends.

( Just to clarify, no offense meant to people who have crosses as religious symbols. I’m talking about cross-shapes in general.)

Evrina + Jo are kind of similar-
when Evrina feels worried or vulnerable, she acts all angry + bitey to protect her feelings.

When Jo feels worried or vulnerable, she acts all hide-y + please-be-nice-because-I-am-cute to protect her feelings.

If only all bullies folded at the first sign of pressure.

I cannot express how gratifying it is to see Evrina taken down a peg. I can tell deep down that she really isn’t a bad person at her core, but she’s still an obnoxious bully who isn’t used to people throwing what she says back at her.