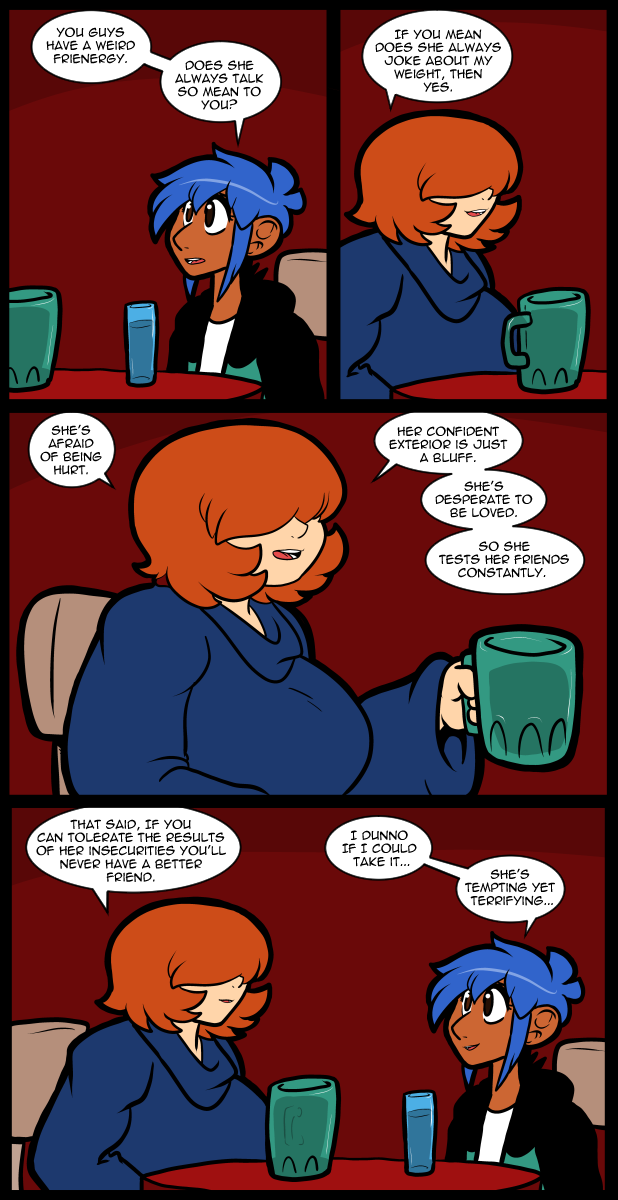 I was talking to Shane about this page & he observed that it was a very frank deconstruction of Evrina’s personality type. To which I responded that it’s basically me psychoanalyzing myself. The cast all have bits of me mixed in to them, compartmentalized to make them different beings. People generally assume that Thomas is the one that is the most like the “real” me, but that’s a very surface level, 2007 webcomics critic, view of things. I’m mixed up in all of this, so sometimes the cast is an illustration of me in conflict with myself. The world has taught me to expect betrayal at every turn. Alex is basically explaining the part of me I founded Evrina on. Mixed up with a couple of people I’ve known, to make her. I’m not as bad about this as I was in my youth, but I do still want people to regularly prove that their love, for lack of a better terms, for me is genuine. “Tell me you would miss me if I was gone…” Deep down Evrina doesn’t think she’s worthy of being loved. So she nips at the people who love her, trying to prove herself right. Alex understands that & also understands that there’s no real conviction behind the mean things Evrina says. Evrina would drop everything and rush to Alex’s aid if she needed her. Even if Alex was wrong about something Evrina would back her. Just another illustration of the strange aspects of love & the human mind…

I have been pushing myself to create content faster & more frequently over the last few weeks, trying to get a stronger, more diverse, income stream set up ahead of the fallout of the American presidential election. As with anything I do my results have been slow. I actually started much earlier than the last few weeks, but I’ve been feeling well enough over a long enough period of time that I’ve been ramping things up as best I can. At this moment I’ve been awake for a very long time. So much so that I have fallen asleep sitting here twice. My brain resets a little after I nod off & it takes a few moments for me to remember what I was doing. I’m sure you’ve all been there at one time or another. I wouldn’t tolerate this kind of treatment from someone else, but as my own boss I treat myself terribly. XD

[I might not be, but- I hate being the 1st commenter. It makes me feel like the 1st bullfighter to enter the bull arena, or something. Ugh.]

In an explanation of Pogo, Kelly said that Pogo the possum, + an alligator, were two parts of his personality: Pogo was kind, friendly + easy-going, while the alligator was the harsh-half of him- the guy who acted brash, an ignorant guy, + a guy prone to throwing fits + gets angry easily.

Another idea from the comic was a guy saying- beauty aids + colognes take away your “safe guards”.
Do you get it?…He said- If you have bad breath, yellow teeth, and you smell badly…ANYBODY who can get through [those] things must be a REAL friend!

We have met the enemie and he is us.

“We have met the enemy and it is Trussed” The Acme Corset company. :)

Can I borrow use of the word “Frienergy”?

It’s been around for quite some time apparently, so go nuts.

Your boss is an asshole. Get some rest.

yeah I don’t know if I could take it either, I’ve got a high boiling point when it comes to being made fun of but once I reach it there’s no turning back

I’d just walk away from the conversation, but a) it’s all in my head. And b) is it “Hey, you, don’t talk about you that way?” Or “Hey, Wanna fight? I can talk about me any way I want. … oh,yeah? Well I’m taking me outside to settle this.”

Either way, I get it. We are our own worst boss/harshest critic/least supportive family member.

The self-employed do tend to have the biggest assholes for bosses. I’m quite aware.

Still though, good news about you feeling better, and yes, we would totally miss you if you were gone. Or at least your work, but then, that’s pretty much the same thing, isn’t it? Can’t have this without you, so, yeah.

…I don’t know if that was too much truth or just me being the socially awkward ass I’ve probably been all along.

Jackie, I’m glad you are feeling up to doing more. Generally speaking, as long as you don’t crash yourself, the more you do, the more you can do. As for the post election world…the rich old white guy wins. The thing about rich old guys is that no matter how much they carry on in campaign speeches they really don’t want to rock the boat too much. Some things will change, but then things are always changing. Covid will eventually run it’s course and there will be a new crisis to keep us preoccupied. Chances are next year will look a lot like last year just with new actors in some of the rolls.

Let me repeat that:

My physio said, push yourself to just short of the point of pain. Once you hurt yourself you’re causing damage insread of growth.

Not to discourage you, but I for one (and I think many of your fans)am very happy with your updates and work. If things are rolling and you find yourself being able to do more, great. But please don’t overdo it on our (the royal our) account.

Well, Ok to build a buffer to carry yourself through hard times.

‘Psyche bits made into character’ is basically what Leftover Soup was, yet unlike that, I wouldn’t have been able to tell had you not said anything. You’ve made some relatable and diverse (in the old sense) characters.