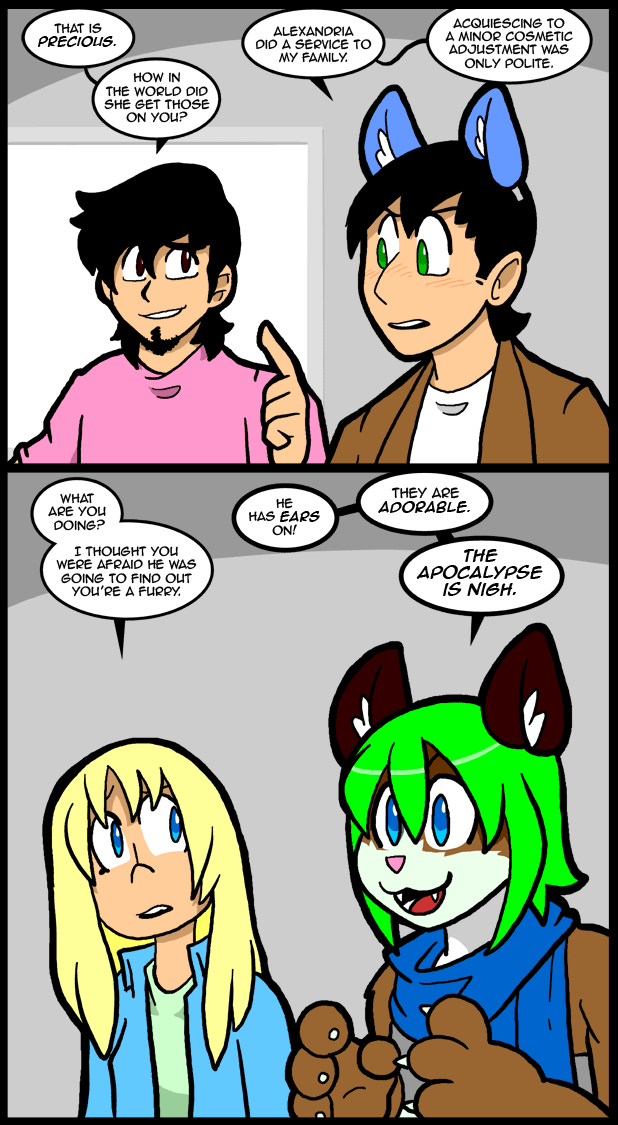 Under that mask Victoria is questioning everything she believes to be true about the universe.

Her outfit has made me think about the logistics of a fursuit far more that I would ever have normally. Just the mask would have to be a feat of engineering in order to make it fit so tightly, while allowing resperation. I like the idea that Victoria has actually overcome some hurdles in her quest to prance around in a costume. In my mind she also has a cooling system built into the body sort of like a space suit. Like, if you touched her fur hard enough you would feel tubing running up and down it in various places… Okay, what I’m saying is that she has constructed a Dune style stillsuit and fitted it desert fashion, without being told how because she is the Kwisatz Haderach.

Today I tried to come to terms with Manga Studio 5 by producing a bonus comic for patrons. It has… not gone well. I have gotten as far as almost having the text on the page. I have fought with both computer and software from the moment of conception. I think I’m going to have to resize the page in order to make the text the right size. For some reason it wont remember my settings for text so I have to redo them with each line. Which is not good.

Anyway, I hope to have the thing up by tomorrow. If you want in Nina is the link on the sidebar. It’s a single page strip with Thomas and Carol.

I also tried out my video capture device today. It only got the game stuff and not any audio of me, so that’s something I’ll have to fix. If you want to watch 13 minutes of me not remembering how to play State Of Decay properly here’s the link: Derp!

Teen corner:
hello web people!!!! im back :P miss me yet? its been awhile because I’ve been busy with assignments, drawing, and my sad social life lol. today was awesome though I got 3 teddy bears, roses oh and a new boyfriend hopefully this one is better than the last. also Jackie mentioned I hate mine craft and I would like to say I DO Not. its pretty fun really. I also like little big planet now. I’m on a new medication now and I’m feeling a lot more stable and happy which is good. I’m working on a art project for a contest I’m entering and its looking pretty cool although I believe Jackie disagrees. I’m reading all quiet on the western front for world history which isn’t to bad but not my favorite. me and Jackie are going to play mine craft now bye!!! I missed you peeps!

So, Victoria is an engineer, and part of why Reggie acts like an ass is that he feels less accomplished than his sister?

I think that’s probably part of why I act like an ass, so yeah. XD

… so your fursona is a donkey?

I think Alex is my fursona technically…

Heyyy, me too. *high five for being the less fortunate child?*

Well this turned into a self-pity party quickly…

I really don’t hate my life, and I really do love my sister to death, we’re pretty good friends, I swear. I just can’t compete with an engineer’s brain. I’ve stopped trying.

Self-pity party city!
Woo!
Let’s play pin-the-tail-on-the-not-“less fortunate child”!
(Or just on a photo of them;
I am flexible either way…)

Just jumping in to say you don’t gotta compete. People don’t need to be ranked against each other. There’s no winning; live the best life you possibly can.

I’m not gonna feed you some line about how surely you’re better than your sibling at something, both ’cause I don’t know you and because even if its true it probably won’t help you feel better. But, its not like only the one best human gets to survive/reproduce/have a good life. It shouldn’t be the case that only the smartest sibling gets loved by the family (and, if it is the case, I’m not sure that it is really “love” that the smartest sibling “wins”).

Wow. You are CLEARLY an only child. It doesn’t matter if you “have” to compete. Most can’t help it, it’s natural, not to mention at least partially subconscious for many. It’s not like it’s a conscious choice for most people.

Well, I am an engineer, I don’t think it is all that big a deal. And for the record, I live in awe of the things artistic people can create.

And nice touch with the Dune reference, that was a very influential series of books in my teenhood.

I have to say everything about this scene is beautiful and I’m loving every moment of it.

It’s the perfect storm of chaos.

The Dune reference, not just in passing, but full commitment to the Dune reference is a guaranteed way to get me to like your comic Jackie. Without a doubt. Tycho did it with Penny-Arcade (and waters the tree of my fandom with regular little hits), Jeff did it in QC (also a repeat offering), and they are tied for #1 as my favorite webcomics. It may be true that correlation is not causality, but in this case I’m willing to bet that they are at least connected, if not causal.

So keep it up, I like where your head is at.

Also, you have a good comic. That helps :)

Her name is a weapon!

Sorry the “ex-boy” was a scoundrel;
Crave did make sure to hide the body well, right?

Teen: Do American kids read “Tomorrow: The Day the War Began” or “Speak” for any classes? I know they’re used in some school systems.

She actually talks a bit like I do. heh heh…

I remember reading Speak in high school, about a decade ago now, still one of the most powerful books I ever read.

I talk like that too. Lots of people are over-dramatic in their speech for kicks. I switch back and forth between slang that I’m far, far too white and middle-class to have any right to be using, extensive profanity, and extremely formal speech heavily incorporating words you wouldn’t normally find outside of a thesaurus or a really pretentious coffee shop full of people who learn big words for the sole purpose of making others feel stupid. And before you ask, yes, my speech is exactly as strange and comical as it sounds.

The Universe rearranged the furniture while you were putting on your Cute Suit.

Anyone who would like to, “Think about the logistics of a fursuit” might want to check out http://www.furaffinity.net (warning: not recommended for Bible thumpers or the easily shocked).

Speaking of Frank Herbert’s Dune, it turns fifty this year; first published in 1965.

I’m a bit concerned: I do not think this is going to go well for her…

Actually, the irony is that people usually do build some kind of cooling/breathing system into their suits.

It’s more common than most think, as walking around in a costume made of heavy fabric can get dangerously hot. Ordinary cosplayers can get heatstroke on a warm day, and they’re normally not in head-to-foot fur.

I haven’t seen this yet in the comments soooo

Impressive though he was, I always admired more the one willing to become a monster.

Manga Studio’s options can be a bit difficult to fuss around with an learn intuitively at first, but luckily there’s a series of tutorials by the creator that really help clear things up, considering there’s almost zero outside support for the program.

As far as the text goes, if you want it to save your changes, you have to change the fonts, colors and whatever else BEFORE you start typing. If you change the font by typing it out then switching fonts or colors, it will revert to whatever the options were set to the next time you use the font tool. Kind of a pain when you’re always changing fonts, but it’s mostly a matter of keeping it in mind, or copy/pasting from lines you know are set correctly.

Theres 2 ways of making the mask, one is completely foam, the other is half foam and half garden plastic weave thing, either way ive heard it does get really hot, some like to have a wet suit on and keep applying cool water, the other is ventilation such as fans but then you increase the weight. Second theres the automated bits, people have done blinking eyes and others have used pipe cleaners to control the ears by hand :3. theres full suits and partials

So John uses the ninjitsu that he absorbed by awesomsis (its a word… now… ) from Thomas, though much weaker than the masters of course, to crush, one by one, all the males present that are or haven in the past annoyed the furry ladies and gathers unto himself a fur bearing harem. Nice. (once he gets out of the proximity of Thomas’s shadow we get to really see him for the first time!)

Ooops, also forgot to say that yes we missed you The Teen though we always have Jackie’s twisted version of you to fall back on in your absence. (I wouldn’t be away too long you might grow tentacles! XD )

Wow! I’d forgotten just how much I love this comic! The comedy is awesome!

I love that reggie’s sister is teetering on the edge of madness and about to become completely unhinged!

Damn it. Now I have Fursona and Persona games mixed together.
Oh gosh the images will never leave my mind.