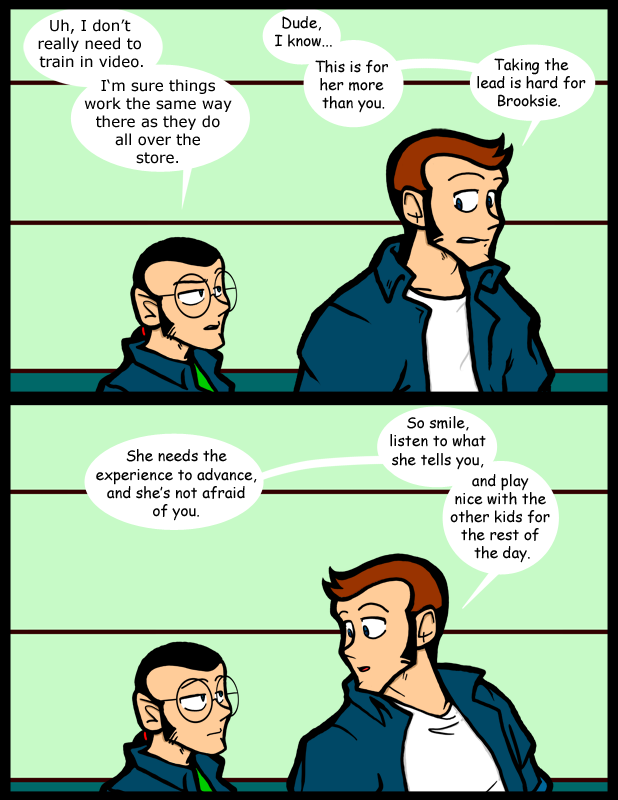 I’ve been moving through Paper Mario at a nice pace.  It pleases me that there are always easy to find save points at all important locations.  I hope it’s a trend that follows in the next game.

It’s odd playing a game that’s so old for the first time now.  It old news to everyone else.  When ever I say I’m playing Paper Mario everyone thinks it’s the new one for the Wii that I’m playing, and I have to explain that I’m playing games I never got around to on the N64.  Which leads to questions about why, and how?  People seem so amazed that my old hardware still functions…  My original Nintendo still works, as does my Super NES.  The only Nintendo product I ever had a problem with was my first Gamecube, which had the dreaded first release glitch.  The one I exchanged it for is the same one I had since.  All my old handhelds still work too.  Is this odd?  You practically have to set out to destroy a Nintendo system to make it stop functioning.

In any case, Paper Mario is as good now as it was then, I’m sure.  I hear you can download it onto a Wii.  My life, however, is tragically Wii free.

Paper Mario is one of the things in the world that justifies my comic, in my mind.  It’s barely animated at all by modern game standards, yet it’s compelling to play.  It’s little more than the repetition of actions with new words.  Kind of like my comic is.  Does that make sense?  I guess I’m the only one it really needs to make sense to…

So why did you decide to go without the black outline around the speech bubbles?

That’s how you know they aren’t talking very loud.

“It’s barely animated at all by modern game standards, yet it’s compelling to play. It’s little more than the repetition of actions with new words. Kind of like my comic is. ”

I sooooooo get that, well in the I’ve never played Paper Mario but am finding your comic totally compelling! I only came across this evening and have read it from the start to here … gonna stop now though cos I’ve got jobs to do before going to bed and an early start tomorrow. Loving it and especially loved the way your world became colour at The Kiss :o)

O.o BWP, you just made me realize something important! Thank you! Nintendo, FTW! I love my Gamecube so much. I also have a DS lite and a Nintendo Gameboy Advance. I’ve had people tell me Nintendo sucks, but I personally stand my guard next to it being inventive, fun and nice ^.^

At the comic, I get the feeling he plays the co-workers off against themselves…

It is my opinion that Paper Mario is one of, if not THE, best Mario game that has ever been created.

I think paper mario is amazing, but my heart now belongs to Super Mario Galaxy. I got 120 stars and haven’t often felt the accomplishment in a game that i did when i got the last one.

I still have my N64 and enjoy playing it. I also have my Dreamcast. The only problem is Golden Eye dosn’t work anymore and Skys of Arcadia’s first disk is scratched right before the secound disk comes into play p.p

That sucks I love that game.

I have all of the original nintendo systems, but a rat chewed through my power cprd for my regular nintendo. I do agree that besides the wrath or rodents those things are fairly invincible. I love all of your logic by the way, in and out of comic.

Interesting; someone commented that Thomas was getting more open with the color switch, and that really does seem to be a good measure of the shift in speaking style, though this was really where I noticed that he was explaining instead of just telling him to do it.

My Sega Megadrive and Mega CD are still in working order.
Unfortunately, finding a television that accepts their signal was another matter.

That’s what you get for hatin’ on Nintendo!

I still have my old Gameboy Color. I break it out sometimes for Pokemon Yellow.

Hell Yeah! I started with yellow the year/month it came out and mine still works.

Yellow is the best pokemon game EVER

has noone seen xplay? they smashed a gamecube half way across the room with a sledgehammer and it still worked with a firm closing of the lid.

I don’t know if it is because I mash them too hard, but shoulder buttons on any nintendo handheld unit I’ve owned become non-responsive within a month.

I notice Thomas seems more proactive since THE KISS.

As someone who has seen people wrecking their beloved gaming systems…

Some people apparently love to be frustrated to the point where their rage makes them do really stupid shit. Also, no matter how sturdy a gaming system is, if someone uses it for upwards of 8 hours a day, but changes cartridges every 15 minutes or so, without proper cleaning, there will be problems.

Also, just to point out, while it´s true that you can take a sledgehammer and bat one of these gaming systems across the room and have it still function, you can break it like that as well. And if you do that shit enough times, they break, because even if they´re still playable, they still take damage each time.

I literally watch paper puppets on Youtube. Not even like actual puppets…just cutouts. Stick Stickly was emotive enough for me. Paper Mario is very good. <3