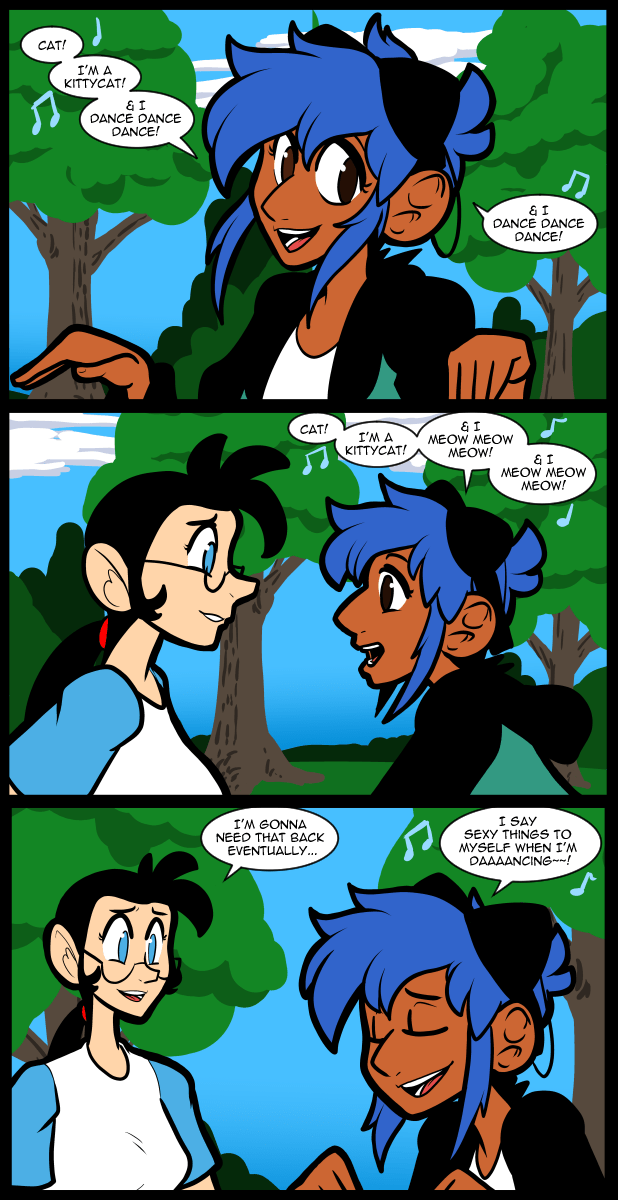 Hopefully it is clear that Brooksie has Jessica’s bra on her head, which she thinks makes her look like she has cat ears. The song she’s singing is an old meme called The Kitty Cat Dance. I don’t usually worry about the timeline of the comic, but in the time they are living in it would be, like, 2 years old. So, ancient in internet time. It may as well be the dead sea scrolls now. Anyway, I thought it would be fun to come back to them with evidence that Jo was let at dem hoots. They probably picked an out of the way place in the park & made out for a little while. They’ve both had an emotional day so far, so it was probably very nice to be with each other for a little while.

This is the culmination of years of effort and character development, all building up to this powerful moment of cuteness xD

Well worth the effort.

My heart cant take the cuteness.

…Well this was a random, unexpected turn. That being said, we need more Kitty Brooksie.

ugh I forgot about emoji problems, the question mark should be a cat with hearts for eyes

Oh wait you said “old meme” which what I linked is probably also a reference to.

The fact that I understood this reference without the assistance of Google aged me 5 years.

The classic – for the uninitiated: https://youtu.be/SaA_cs4WZHM

I still have that video in my favorites lol. Joined youtube back in 2007.

Good thing Brooksie didn’t try that for Carol, Alex, Rulette, or Maddie, otherwise it’d have been “Hey, who turned out the lights?”

From your clues, that would place these events of the comic around Summer 2009.

I have noticed as progressively younger people interact with the internet their basic lack of knowledge coupled with impatience creates the concept that anything older than ___ years is “old” on the internet. Back when The Kitty Cat Dance was new, memes had a shelf life measured in years, now it is a often a handful of weeks. Yes, I do blame the push-button mentality of Millennial thinking – wish the memes would last a bit longer.

Danger. Do not allow ‘Millhouse is not a meme is a meme’ to become a meme. The meme-ception could collapse into a singularity.

And for “doge” ypu do not mean the ancient ruler of Venice. That confused me when the doge meme was starting up.

Funny things is that I find that, coming from Jo, the meme makes sense. No matter how long ago it was in real or in-universe time.
She quotes movies all the time, so quoting popular memes (especially a video meme) from way back feels pretty much in character.

Well… that’s stuck in my head the rest of the day. Hope my clients understand when I mumble “and I dance, dance dance” under my breath during the day.

You might find out who reads the same webcomix as you.

Voice one- “Tony, WHY are we wearing BRAS on our head???”

Voice two- “It’s a [ceremonial] part of the spell!”

-Paraphrased from the film, “Weird Science”.

I mistakenly thought she was wearing those cat ear headphones that are also speakers.

Same here. I was wondering if I’d missed a comic somewhere before I read Jackie’s comment.

So where on the timeline would caramelldansen with vocaloids fit in?

…Can you get me a copy of the game- “Kung Fu Chivalry”?

god i was not expecting that song here of all places

(mumbles something about earworms)

This park sees a lot of action. It’s a good park

The park is a good place to park.

I wonder … are those two meanings of the word “park” related?

Hi! I’ve been reading the Between Failures archive on and off for a couple years, but today is the first time I have finally caught up! I’m adding this comic to my list.

It takes a lot of time to catchnup if you read the comments.

I’m always a bit jealous; I’d love to relax making out with someone I love. Maybe in the next life

Or maybe after the time of covid.

What is it with the Lincoln siblings and getting some action in parks?

Do people just not fool around in public anymore? Have people stopped doing that in the 10 years I’ve been stuck in this house?

I guess people do.

And this, [current information?], says that people in Paris, France, like kissing, + holding hands, in the parks:

Kissing in the park
Paris boasts a wealth of green spaces – ideal places to steal a kiss away from prying eyes!

And then has a photo of two people kissing.

Not away from prying cameras! And now a whole world of prying eyes.

Kissing in the park
Paris boasts a wealth of green spaces – ideal places to steal a kiss away from prying eyes!

And then has a photo of two people kissing.

Not away from prying cameras! And now a whole world of prying eyes.

Classic internet meme-ery here. I love it. I remember my sister and I laughing my ass off at that video at the time.

I know it’s a minor thing, but how does the bra stay on her head?