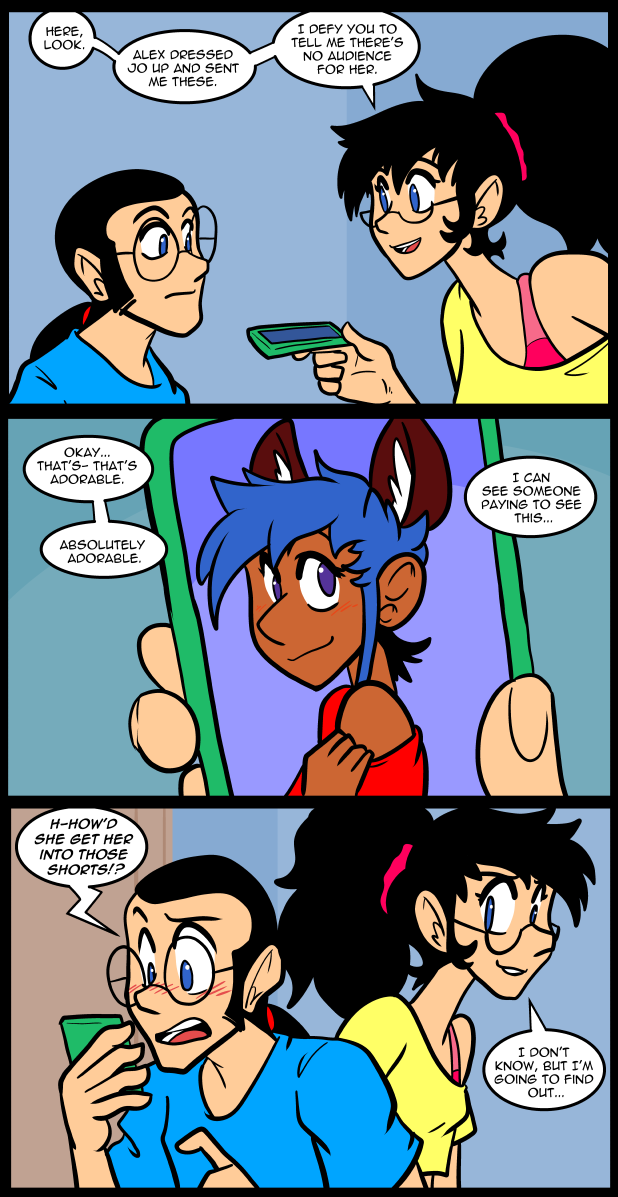 Here’s a link to the scene this references since someone asked again.

I’ve interacted with a fair few cosplayers. Most of them are just weekenders who throw a few things together, but some are zealous to the point that it seems to be the through line of their entire being. As someone who is similarly obsessed with his work I can understand the mindset. Everything comes back to cosplay, all conversations eventually lead to it. When they aren’t doing it their thought bends toward it. It makes them very difficult to connect with or get information out of unless you’re part of that world. The tiniest portion of them actually manage to fold their obsession into their career. You can see the pure focus in how costume designers talk about their work. Detail orientation on a level almost no one will notice, but they aren’t doing it for you. They’re doing it for other designers. Designers who will rip them apart if a fabric wasn’t available at the turn of the century and you get it into a movie. I’d call it strange but it really isn’t. It’s just how passion exhibits itself in their world. That same kind of pedantry echoes in every other field. sometimes the line between play and profession is very fine.
I’ve looked over a lot of patreon, kickstarter, gofundme, ect. campaings to see if Jessica’s plan is potentially lucrative, and it is. A couple of people with a camera and some swimsuits can make a few hundered extra dollars easily if they have a basic grasp of self promotion and are decently attractive, or fill a niche. The range of success is pretty wide. From $50 a month to upwards of 3k. People are willing to pay for the content they want and the better you are at giving them exactly what that is the more they will pay to make sure you keep creating it. It’s different from the old model of trying to make something that appeals to everyone. The idea on this scale is to find a very specific, loyal, audience and cater directly to them. It’s basic capitalism really. People will pay for what they want and the harder it is to get what they want the more they’ll pay. Which sounds easy, but it really isn’t. People don’t always know what they want until after they see it. so there’s some push and pull to the whole affair.
Kevin Smith famously championed this approach at the start of the crowdfunding craze. He recognized that he appeals to a specific group and rather than try to pander to the world he decided to stick with the people who loved him regardless of what everyone else thinks. It’s pretty clear that it has worked. He went from talking about his career being over to having several projects in the works last I heard. At the base of that philosophy is treating you supporters as partners rather than mindless herd animals. Of course the mainstream has proven that appealing to the lowest common denominator works, and works much better in many ways, but it sets up a select few as kings. The other way allows more people to succeed and ultimately gives us all a richer table to select out delights from.
Right now Disney has direct control of a massive share of our culture. Acquiring Lucasfilm and Marvel expanded their empire in a way that is kind of terrifying from the perspective of the independent creator. Lucasfilm was very lenient with fans when it came to their fanarts, almost to the point of actively contributing. Marvel was more litigious. Disney is notoriously so. What side will they land on now? So far it seems about the same as it ever was. Is that because they recognize the value of the viral nature of fanworks, or are they just biding their time? I can’t say. I haven’t been paying as much attention as I used to. It’s been a long time since I heard of a cease and desist hammering some random schmuck. Unfortunately I can’t guess the future, so I’m not sure if Disney taking over so much of popular culture will ultimately be a good or bad thing. People really like the Marvel movies, and were pretty satisfied with a non George Lucas Star Wars. As far as me goes I don’t have any choice but to try and keep appealing to you guys. XD

I have been asked about the film rights for the original arc of this comic several times, but no one has ever made a serious offer. I think that it could be a decent movie with some tweaking. Going back to it and working out what it would take to be a more functional script is not in the cards right now. The original idea had merit but it’s a bit light, and the comic version is rambling. I’d want to introduce Jo earlier and Reggie in the first day if I were going to do it over again. Jo doesn’t appear until nearly halfway through the first part. At the time I was trying to decide what version of her I wanted to use because the confident punk rock lesbian version seemed wrong. As you know, I decided to dump all of my social anxiety into her and we got the little scamp everybody loves, I just wish I’d been able to work that out sooner. That’s the problem with stuff like this. There’s not infinite time for revision. You kind of have to find a balance and bite the bullet when you hit the line. In print you can go back in and edit so much more easily than when you’re drawing it all out. Even J.R.R. Tolkien famously edited The Hobbit to suit the Lord Of The Rings after it was released. In fact he was revising his world till the day he died. There are several versions of the various myths in the Silmarilion and Unfinished Tales. He never quite decided what Galadriel’s role in the creation of Arda was. One king who started out as a fairly generic hero ended up as more of a craven coward in the more recent notes. Nobody really knew all of that till after he died though. One of his sons filled in the gaps as best he could. Even though he had a lot of time to edit the time was finite.
I kind of wish I had a real Jessica as a friend. Someone who could round up a team of creative people that would all work toward my goals. Say what you will about her, but she hasn’t taken her role as producer lightly.

With lube… lots of lube!

HOW DARE YOU NOT SHOW THE BOTTOM HALF OF THAT PHOTO

could swear he had a similar looking vote incentive at one point, but i’m probably wrong on that.

Would need to have that at least as a Patreon drawing

For “Jo in hot pants” to lead to profit, we need to actually SEE said hot pants while she’s wearing them.

We did. A while ago. It’s a photo from an old page when Alex dressed Jo up. Jo says something about not having all the clothes.

Will these two girls join Alex, and turn their cosplay party, into a very, very STEAMY party? No, please forget that. I don’t REALLY want an answer to that. :D

Okay, so if you DID make this into a movie, would you go live-action or animation, and do you have any ideas who you’d want to cast?

Think it would really be more of a soap opera. So much would have to be left out for a movie.

I’m a guy and I do like cute women in tight shorts, but isn’t that a little objectifying? I hope we’re better than that.

Besides, not all things cute need to be in tight shorts. I’m pretty sure that “no shorts” or “short shorts” is the preferred view anyways.

No, it’s not a “little” objectifying. But then, half the internet is given over to objectifying one thing or another. In fact, that’s where most of the its profits come from.

That’s why I don’t go to Twitch anymore. Too much cute girl, not enough gaming.

If you’re looking for table top stuff, then I suggest Kim, Trot (+ 2others) from the YOGSCAST playing D&D. Mark is the DM.

It is incredible hard to gather people together and get something done, creative or otherwise. I greatly enjoyed my producer duties on my animated webseries, but now that everyone is scattered and working adult lives, I find I’m left just working on things on my own. Too hard to get people together when you can’t pay them for their work right away, so for now it’s just building up to that point again.

Crowdfunding is always an option for me, and Patreon has been popping up on my radar a lot lately. Can only hope once I make that hop to Patreon I regret not doing it sooner.

I’ve been listening to the podcast “Writing Excuses” from the beginning. They did an episode where they talked about advice they’d like to give their past selves.

A part of Howard Taylor’s (Schlock Mercenary) advice to himself was to not wait for an artist-friend to collaborate with him. Practice the art himself.

Leave it to Jess to get her out of those shorts…

One of my niece’s ‘friends’ suggested I do cosplay. As Doctor Ivo “Eggman” Robotnik.

Yeah. She or he could’ve chosen a good looking HERO, for you to cosplay, like: James Bond, Sgt. Fury, Rocky, Superman, Bruce Wayne, etc..

To be fair, there aren’t enough good cosplay as fatter characters. Gimme enough time and hair loss, and I’d totally pull an Eggman.

I remember a news-magazine’s reporter, reporting that- he was once talking to an average Iraqi man, after Iraq voted in it’s new government, around 2005.

When did that cosplay thing happen! I have the foggiest memory of it, but only barely…

I see the ‘Here’s a link’ text, but not the actual link.

I don’t know what the problem was, but I fixed it.

I know professional cosplayers, and those who make a living making costumes for them.

My wife’s friend – Lorraine Torres – or Rainyia Cosplay to those who know of her – became a full time employee at Blizzard due to her cosplay obsession.