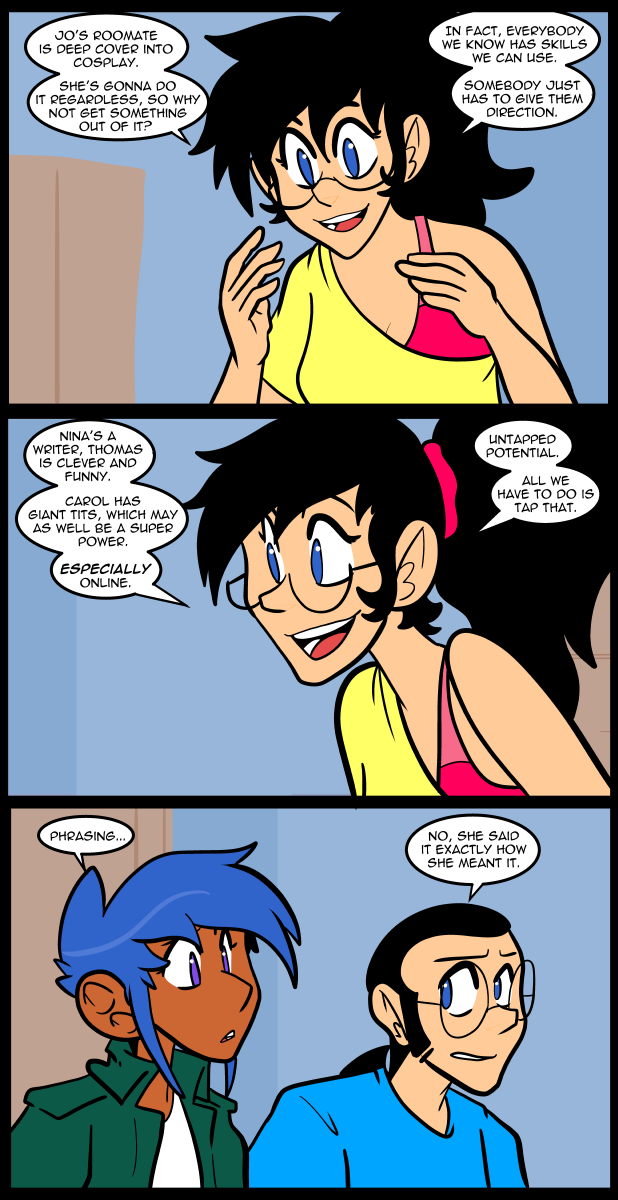 Her idea is basically what I would’ve done with my life if I was a girl. Excepting, of course, that the entirety of my life would’ve been different so chances are none of this would’ve happened, and I’d never’ve thought of it. Maybe it would be more accurate to say that if I were suddenly changed into a girl I’d enact her plan to make extra money. I think it’s fair to assume I’d be a sexy chick. You can get a lot further by yourself as a girl online if you’re moderately good looking and have a decent personality. There are certainly a lot of attractive women with no personality that are famous for looking good with a side order of being human monsters. Being a female creator is even in higher demand now, as long as what you create falls into a very narrow selection of things.

One of my friends is a girl, but no one believes he because her content seems like something only a guy would make. If she was doing a story about something trendy she could ride that wave of women doing it for themselves to the bank. She’s absolutely a better artist than I am, so it’s always seemed like she should be the one telling me how to do things rather than the other way around. Although I don’t bother much because she does whatever she likes and I’ve learned that my input is of no value to her, so there’s no point in wasting her time or mine. Of course being a girl isn’t a magic advantage, I’ve just noticed that you can use it as leverage right now in a way that you can’t as a dude.

If you don’t think having a calm voice and being pretty can make you money then feel free to look up Psychetruth on patreon. I’m not linking it because they don’t need my help one tiny bit. In fact I need your help so look me up there instead. XD Anyway, there is money to be made if you have a certain set of skills and the drive to make money in that way. The reality of things is though that as easy as it might be compared to say, digging a ditch, or working in fast food, it’s still a job at the end of the day. The more you come to rely on that income the more time it will take, just like any small business. So it works out to the same amount of work in the end, you just might like it a lot better and not kill yourself after the 3000th person screams at you because they got a pickle on their burger when they wanted onion.

I heard of cosplay before, but this COSPAY sounds fasinating.

Actually, if a person screams at you for putting pickle instead of onion on their burger, just go behind the kitchen wall and swam ’em out. Then bring them out their “new” sandwich. No need to expectorate or otherwise adulterate their food. That’s just gross! And unsanitary. A person screaming about such mundane minutiae has deeper problems than getting improper nutrition in their fast food. They deserve your pity, not your wrath.

Then go in the back and scream at the cooks who got it wrong!

Actually I’m now sold on the idea. The talent of all the characters put together could sustain a decent channel. Now I’m hoping Thomas becomes their ace mystery editor Ala Barry

I hope you don’t find it rude or inconvenient in asking, but can you say where your friend’s art can be found? I’d love to see her work, since you obviously respect her craft and even say it exceeds your well done work.

I totally buy her femininity. It’s the way she draws faces. There’s some sort of quality in her faces that I’ve only seen female artists do. I don’t art myself (though I do craft), so I don’t really know how to describe what I mean better than that.

Jess’ idea is that her, Jo, Jo’s roommate, and all her friends at the store would form the cast of a hilarious and watchable webseries?

This is coming up soon, right? El Goonish Shive had 2 of the characters have their own critique show. It could work.

Yes, Jess, you’re right about Carol: behold the power of bewbs. When I started on the Interwebz back in the 1990s, 70% of the people who claimed to be female, weren’t.

Thank you so much, @Jackie. I visited Psychetruth’s Patreon page, and now I just want to melt down into a warm, happy puddle and have her roll around in me.

In re: pickle vs onion: um, is that something the Teen did? She might need to work a McJob for a few months.

I feel like guys have a strange idea about girls and sex appeal, like that sex appeal is an awesome superpower women have which always gets them their way. And then a related tendency to explain how they would exploit their sex appeal if they were a girl. As it happens, this is not actually how sex appeal works. It functions as sex appeal and nothing else. And quite often, anything else is discounted, which is why female created content tends to fall into such a narrow category. So, as a girl, sex appeal tends to come across as more of a kryptonite than as a superpower. At any rate, it tends to be inherently limiting.

Maaaaaaaan…i knew people like Jess while I was going to art school…..The types that look more to use others to make their way up….and if shes anything like them….shes gonna be the First in and the first to give up when it gets difficult.

Jessica is the mastermind

After you tap all those people, do you all go get tapas?

Nah, they just don’t untap for the next turn or two

Well, girl!Tip did end up being a school teacher instead of a psychologist. But she still worked for Skin Horse.

(Skin Horse also happes to be the name of the webcomic I’m referencing. It’s part of the Narboniverse as the personality sprites along with the daughter of Helen & Dave have shown up.)

There’s one more member of the ‘Narbonic’ cast in ‘Skin Horse’ from time to time, but it makes for one hell of a surprise.

“BY YOUR POWERS COMBINED, WE ARE…”

*Jess stands proudly everyone else squirms awkwardly behind her*