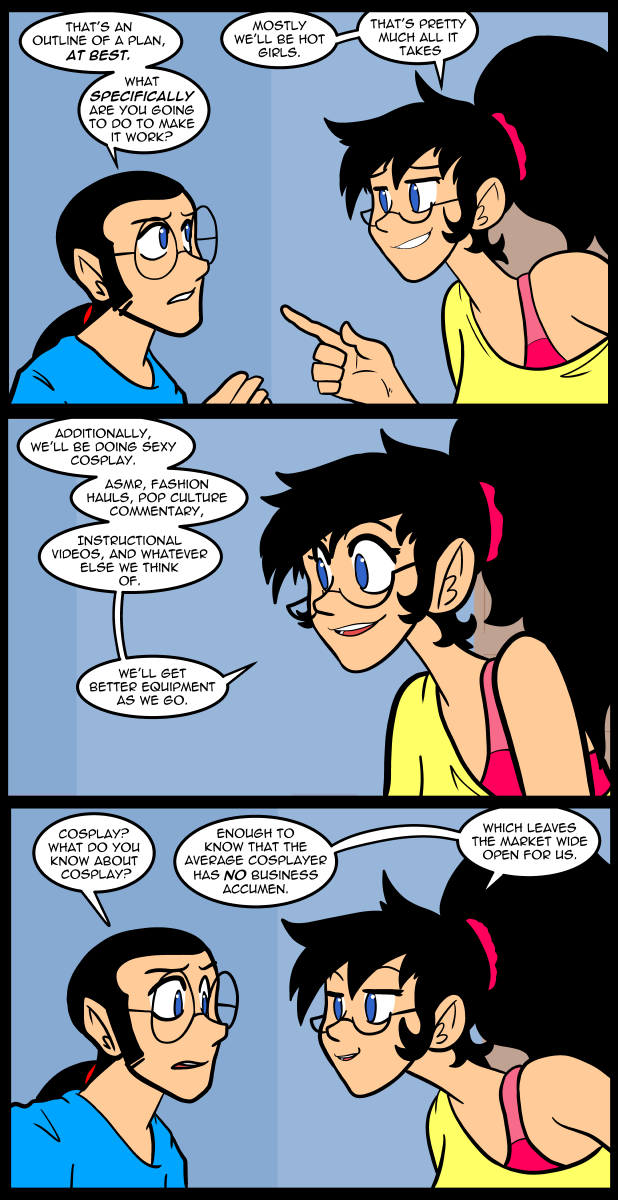 Jessica has grown up with a brother who doubts every idea, every plan, every move, she has ever made. In response she’s learned and learned how to think the way a winner does, by knowing how a loser reasons his way out of trying. Ed doesn’t pick apart her plans out of malice, but rather love and fear. Love and fear are but a part of a whole and Jessica has more parts at her disposal.

Here is a reminder of a few things Jess will be referencing soon.

I may as well take a moment to remind you to consider joining my patreon. It’s losing more people than it’s gaining over time. Mostly to finances if the exit surveys are to be believed. Everybody gets the same rewards for a buck. If you want to give more support I won’t complain though. If you want to barter for extra favors I’m easy enough to contact. 33 new people would offset the losses for this month so far. The link, as always, is Nina on the sidebar, which I should change at some point because it’s been there so long no one notices anymore. Anyway, give it a thought if you like my work.

They should get Carol in on this. I would watch the hell out of her doing a let’s play of Totally Not Mass Effect.

Likewise. It’s always nice to see humanity stomping the galaxy’s collective nads and then leading them to a bright and shining future.

Google has failed me. “Totally Not Mass Effect” simply returns a Tumblr full of random Mass Effect reblogs. What am I missing?

In my defense, it’s been a while…

I seriously want Jess to become the ‘arin hanson’ of this duo, where her misfortune and ripping on how bad she is at games is all the attention she gets, but they’re successful…….and she hates that they don’t like her XD

Pretty sure the viewers are gonna love Jo for nailing every game she gets (and for cuteness points) and make fun of Jess for being terrible. I wonder how she would react to this

In my head, not very good, but it’s still too soon to make bets

I wish I had her gumption.

I had forgotten about the thumb drive, specifically, but I did comment on Monday that this “building a brand” thing was leading toward Jo’s movie ambitions. I’m feelin’ pretty good about m’self for predicting a plot point. :-)

Displayers may not have business sence, but there are alot of em. Good luck Jess

You’re absolutely right about the Nina icon not even registering anymore; I almost forgot it’s there.

Only Jess could win doing something she sucks at. Wait — let me rephrase that – naah.

So @Jackie, in re your subtle Doctor Who aside, which Doctor is your fave?

I really like #2. I’ve sampled them all, and enjoy them in different ways, but #2 was such a fun character.

Care for a Jelly Baby?

Ive always wanted to try one.

Oh, dear. It would certainly be difficult to match his old Sonic Screwdriver; Eveready hasn’t made the base flashlights in decades…

You should be able to find one at any hardware store. :) Make sure it has a metallic exterior for full authentic appearance. :)

Well, specifically, the original stage property was an early 1960s model Eveready AAA penlight, hence my observation above. I had one identical to it when I was a kid and nobody on this side of the pond had ever heard of Doctor Who.

That said, eBait has some dandy LED models with very similar styling available in this new Millennium. It would take very little work to kit one out as a proper Second Doctor Sonic Screwdriver.

Was way to entertained by the ASMR remark in this pg

It’s amazing what lengths some people will go to to try to achieve ASMR. Infact, it’s probably thefastest way to get to the weird part of YouTube.

The funny thing of it is is that you just neef somegood speakers and to listen tosome of the songs Erutan (katethegreat16) sings. Not every song will do the trick– but her covers of, Home Sweet Home, Silent Hill Music box, and a few others will trigger it for some.

I looked at BF comic #1066, + some of the comics around it.
After doing that, I finally caught on to the meaning of the name, “NINJO”.

Sometimes, the metal gears in my head, click together the right way, + I figure something out. :D
That’s a nice one, Jackie. I like the word, “Ninjo”.

Portmanteu’s can be a lot of fun. Though, there are still those that are groan worthy or cringe inducing (“guestimate” comes to mind).

I liked the [tv movie?] that had the first five Doctor Whos in it.
After one battle is won, Dr. #2 is leaving, and he says Goodbye to everyone.
As he’s leaving, he shouts the insult, “Fancy pants”, at Dr. #3. To retort, Dr. #3 shouts back: “SCARECROW!”
It looks like these two guys have a little inner-office rivalry going on! Hee hee hee.

Got to love her smug expression in that last panel.