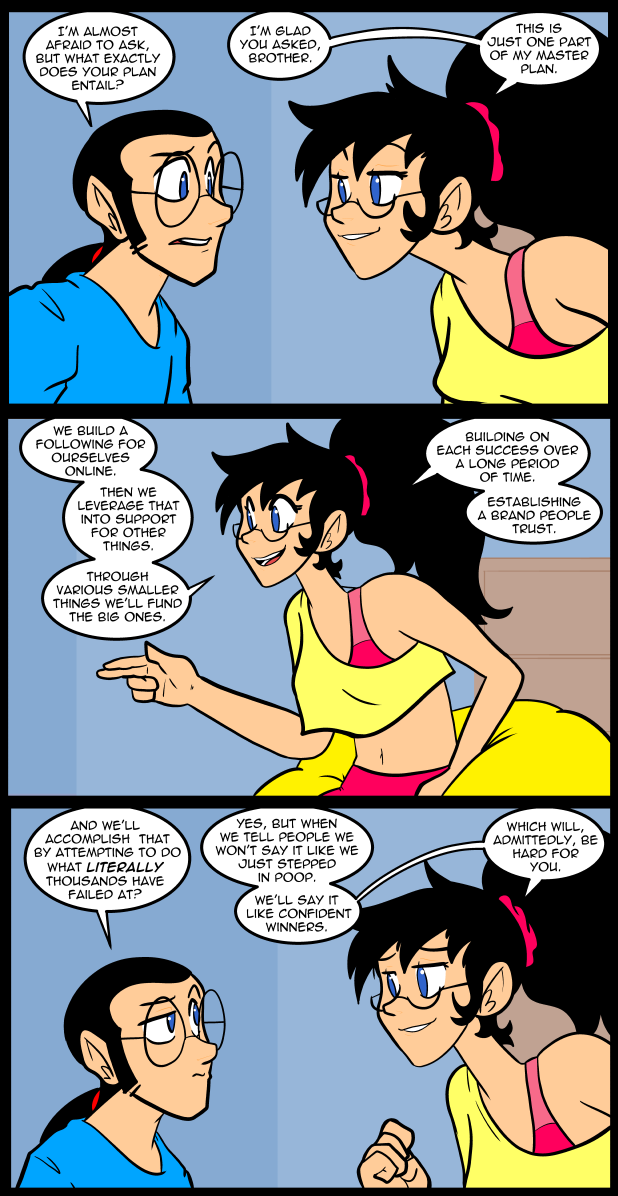 I was certain I’d used this title before, but apparently I never have. It seems so obvious, maybe that’s why I thought I had. I checked though.
Eagle eyed readers will recognize the beanbag as Jo’s nemesis from page 741. It’s one of my favorite moments in the comic with Jo. It also leads to Jess passively asking her out. She plays it like it’s just casually going for food, but in retrospect…
It’s kind of fun to think about what might have happened if she never borrowed that camera. She might have ended up bonding with Ed more, or in a different way. It’s safe to say that she’s attracted to both of the twins, but Ed is so much more reserved I don’t think he would ever have made a move on her. He may not have even looked at her in that way since he’s always been so drawn to Nina. Jo might have ended up with John too, although I like him finding himself drawn to Alex more. Since he’s a bit shallow it makes it more fun to write him trying to figure out being attracted to someone who isn’t his “type”.
It would have been really fun to pair Jo with Mike. They would have been an adorable couple, and it would have been a real problem for Mike since he’s the manager. With Carol and Thomas they’re technically equal as far as the store hierarchy goes, so the question of coercion isn’t as big a deal if things go wrong. They don’t have any power over each other, although Thomas defaults to her being in charge because he prefers not being in control, or responsible for making choices. I wrote some ideas for Reggie and Jo being a thing, but ultimately decided not to do it. I think it could have been really good especially in light of some of the future stuff that’s coming, but it never seemed to play out right. I think they could be good friends again, but something about them doesn’t seem to work right wen you pair them off. I feel like at best they could go as far as a drunken mistake, except Reggie wouldn’t get drunk and he’d also never have sex with a drunk girl, as it goes against his code. Something would have to happen that made him want to get drunk first and engineering the whole thing would have been a mess. At the same time I never take any idea off the table. You don’t always know what characters will want to do until they’re sitting on a park bench in the rain, so to speak.

I feel like Jess has no idea how to truly go about this and just think Let’s Plays are an easy way to make money.

I do think they might possibly have something good on their hands. I’d personally definitely listen to a Let’s Play hosted by Jess & Jo, and adding Ed might just broaden their appeal, as he could easily be the grump to offset all the rays of sunshine the girls will be blasting up everyone’s collective rear-end. XD

To be fair, we say this after already being entertained by this trio for years in a different capacity. So in this sense, they have already became the brand that we trust.
Wow, I didn’t even realize that myself until I’d typed it…

A Let’s Play with not just one, but two cute girls? And one is brash and confident and vivacious, and the other one is shy and has interesting ways of talking (“in the before times” and similar)? I think they have a chance.

I don’t follow Let’s Plays but the hook that they are playing old games that are hard to find seems like it would work both for them and against them. On the other hand, playing the hot new games *and* playing old rare games would only serve to give them depth.

I agree with Par: adding Ed would liven things up considerably, and he would accrue a few fans of his own. Having him around would make Jess seem even livelier, just by the contrast, and some grumpiness might be like adding salt and pepper to the stew.

I don’t know that they would make it super huge, but I could see them getting enough money to buy more games, making it a self-sustaining business. They probably won’t get rich enough to retire but they could have a hobby that pays them, which isn’t a bad thing.

And yes, I realize I could google it, (auto-correct doesn’t like google) but I’d like some knowledge imparted from elsewhere for a change.

Videos of people playing a game like, Let’s Play Bomberman, or whatever. Sometimes there is commentary, like with Game Grumps, or just someone playing. There are other versions of essentially the same format as well.

I do think that Jo and Reggie can and should repair their friendship. I think Jo moved the needle a bit with her impassioned speech about wanting her old friend back.

Reggie’s thing about taking over and building his empire could be partly because he really feels like everyone is out to get him; of course they really aren’t, and his defenses keep pushing them away. If he were to drop the chip off his shoulder and relax a bit, he could wind up in a state of friendship with all of his co-workers. Of course, that might happen the day before the store closes forever.

Reggie to me seems like he comes from a family / background / upbringing where he really got kicked around a lot. He came from money, then he had to prove himself and be the bottom guy in the totem pole with the job in construction, which went so very poorly for him, and then he got kicked out of even *that* when the nail gun incident happened, and all of that just led to a desperate need to prove himself. He *wasn’t* going to be the small fry anymore, and he was going to prove himself *however* he could. It’s also why he was so surprised when he was talking to Nina (gunfight in the store) that people could still be friends *and* technically subordinates. I don’t know. Reggie is a jackass, if a lot less so as of late but I feel like if life hadn’t happened to him, he’d be a lot more of a good guy.

I couldn’t agree more, except that I’d point out that Reggie isn’t a bad guy anyway. He’s technically a pretty good guy, he just makes an ass of himself a lot because, like you said, he’s trying to prove himself. He’s just trying so hard he goes too far and often loses sight of everything else.

I have a sneaking suspicion that this is leading toward finding an audience for Jo’s movie-making ambitions…!

Why do I think Jess’s plan will fail harder than Starscream at a Megatron convention.

A few more (empty) buzzwords and she’d be giving an investment seminar.