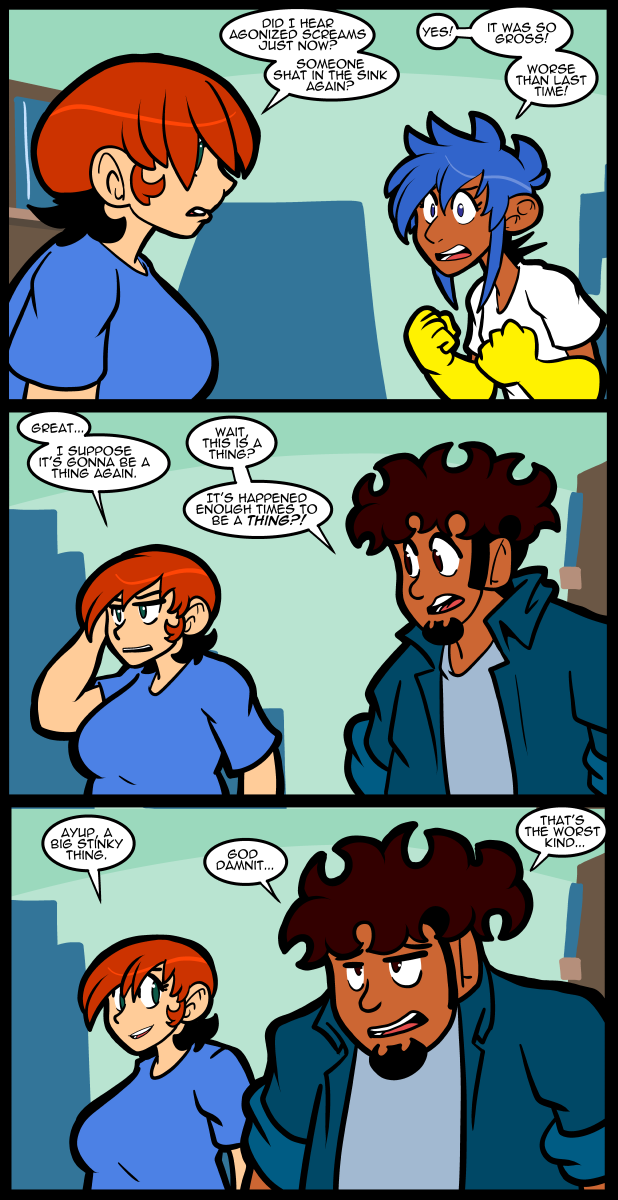 Someone commented that they sort of expected me to talk about Final Fantasy: Crisis Core because of the title of the last page. I barely played it. It’s one of a long list of games that make it really difficult for me to keep playing because of limited time quests and busywork. I just don’t have the time or inclination to micromanage sidequests that may, or may not, lead to the best weapons, or whatever, in a game. Crisis Core was a warning sign for the end of being able to enjoy Final Fantasy games. Nostalgia made me play longer than 13, but I still couldn’t stay invested. I used to use cheating devices to offset problems like this in games by speeding up grinding and stuff, but that’s just not an option anymore. I don’t have the coding skills required to make it work like I could with gamesharks.
I really miss gamesharks and their equivalents. They could take shitty, broken, games and make them playable.
I used to have a gameshark for the dreamcast which I used to take the edge off of Resident Evil: Code Veronica. Unfortunately when I went back to finish it the GS was broken and it left my save file impossible to use. Usually I save things in a state that make it possible to continue without the GS, but I forgot in this case, then I moved to Colorado. So a few years later, when I had a moment to think about wanting to know how that game ended, the save was broken and I just wasn’t going to go back and play the first half of the game for a third time. (I played it on the ps2 and stopped at the halfway point that time too.)
I like DLC and amiibos and stuff because they are kind of like cheating in some games. They make Breath Of The Wild a lot less grindy for example. They also make the Fire Emblem games more fun by letting you quickly grind powers compared to doing it in the regular game levels. I don’t love paying for shortcuts, but I’ll tolerate it just so I can play a game to completion for a change. It kind of makes it seem like developers know that their work is padded for time if you look at DLC a certain way.

Oh man, I remember working at Wal-Mart. I was technically an electronics associate, but I was also the one they called whenever we had a Code Brown in the restrooms, as I was the only one who wouldn’t bitch about having to clean up bodily fluids or waste (seriously people, soap exists for a reason. Get it done fast and you can be clean and disinfected quickly).

The sink. The urinals. Smeared on the mirrors, dumped into corners. Left in the toilet after it had been clogged with masses of paper towels. On the ceiling. THE CEILING! I went straight to my manager and said that I was going to be about an hour due to the scale of the mess. He said he’d make sure I got a bonus on my next paycheck. (I did, made an extra eighty bucks off of it). I dunno who wanted to trash us that badly, but it was nice and clean again in less than an hour. Unrelated, there were police cars and someone got dragged out of the store and arrested. Wonder what happened.

Code brown. I totally forgot about that. XD

Wasn’t the only Code, either. There was a Code White (drugs) in the front restrooms that I had to report; ziploc bag of white powder that turned out to be nearly half a pound of cocaine, if I recall correctly. Cops were there for hours, and I got paid for answering questions and doing no work. :D

I think a lot of the aversion in part comes down to the subconscious or otherwise realization that someone nasty and inconsiderate enough to ignore social mores for defecation are also nasty enough to be likely to carriers for communicable diseases.

There actually aren’t all that many communicable diseases that can be passed in stool that don’t require getting it into your body in some fashion. Which, unless you’re being REALLY stupid, isn’t going to happen. The ones that could be passed via normal exposure could be passed in many other ways that you’d be exposed to before you even looked at the poop.

1) Fecal shenanigans is the symptom I am speaking of here, but not the sole vector.

2) I’m sure they were conscientious enough to wash their hands on their way out and not touch anything outside the bathroom too.

Most other fluids you’d never know were there, inside or out, so the point is moot. XD

on #2 – I doubt that very very much.
It is a reason why I grab a paper towel to open the door unless it has an access control pad or swings out – those I push open with a foot.

I always wash my hands when I get home or before I even think of touching food I will eat.

Working for a gas station/mini-mart in 1990, I had a similar experience. In the women’s room. Looked like somebody had stood on their head and f@$%ing EXPLODED. Walls, ceiling, fixtures, even the lights.

I dragged the garage hose into the restroom and simply hosed the entire room down, then replaced all the soaked paper supplies. I can’t imagine today how I got through it.

Didn’t even get a thank you from the manager.

Done that.
Spent 2 hours with a power washer,
And then the manager kept telling me that someone else had already cleaned it?

Is that a play on the Ren and Stimpy, “It’s Log” song?

I suspect it is a play on the Slinky commercial jingle, by way of Ren & Stimpy.

I managed (for the most part) to love and enjoy Final Fantasy games up until FF12. I loved FF12, even with strange mechanics like “Don’t grab chests or you’ll miss the best weapon in the game~!” I know a lot folks hated FF12 for the hybrid action/turn-based mechanics, but in my opinion, they did it a helluva lot better than 13 did, and not everyone in FF12 played Kingdom Hearts and thought Edgelord Cloud was the coolest thing and wanted to be THAT… like FF13’s cast did. Still, in my withered blackened heart, FF4, 6, and Tactics will always be the best. FF4 was my childhood, alongside Breath of Fire, Secret of Mana, Mario RPG, and Illusion of Gaia as childhood classic RPGs. I loved 4 because the game wanted you to explore, but was very straight forward (also it had Rydia… I’ll leave that thought lie). FF6 was similar but more detailed in execution. And FFTactics is just… I don’t know where to begin, it is just golden silk woven into a game by the gods themselves (which makes it all the more irritating that I can’t find FFT or the War of the Lions remake on Steam, grr).

I could potentially ramble FF fan-nerdom about the pros and cons of the older and newer generations of FF games, but ain’t nobody wanna scroll past even more text.

FFT has never been ported to the PC. Get your hands on a disc and use ePSXe. Only way I’ve ever played it. Save states FTW.

I share your adoration of FFXII. I was stuck for about six months with no PC, only a PS2 and only two games: MGS2 and FFXII. Got ahold of a Gameshark and played the pants off both games. FFXII is a wonderful time sink, and somehow never ran out of stuff for me to do. I only beat the main story when I got a new PC, just to see how it turned out.

After binging the game hard I decided to take a break right before going to “Sky Fortress Bahamut”. Figured I’d take a week off, since the fight with Gilgamesh (and others) were pretty draining fights (John DeMaggio’s Gilgamesh for the win!). I ended up forgetting to come back.. only to be told years later by a friend that I was RIGHT at the end of the game, and could have completed it right then and there. Once I get the Zodiac Age version, I’m gonna go in for a proper round 2!

Correction: FFT has never been ported to the PC *as far as I know.* I think I’d have heard about it, but who knows.

One can only hope. I’d love WotL on mah computer. The only thing that really irritates me about it is the amount of effort to get a Dark Knight.. but no way to get a Holy Knight. Still got plans for future runs, “Story Characters Only” and “Monsters Only” runs being the most prominent setups I have in mind.

It has been downhill since FF7 for me; too many characters that were either kawaii desu desu cutesy mascots or looked like they were auditioning to be Gackt impersonators on top of writing out of a soap opera.

I think the hardware limitations of yesteryear led them to making better games back then since they could not just cram in everything that took their fancy and had to trim it down.

Squaresoft has always strived for realism, and the big clamor for FF7 was its graphics over anything that had come before. So in reality, it was part company hubris, part gaming population who demanded bigger and better graphics.

Lol! She know the past tense of shit.

Of course Carol does – and along those lines, I think what she is experiencing in the final panel is … shattenfreude?

I suppose so. :)
For expert advice on the proper, grammatical use of “shat”, should I call William SHATner?

Or maybe I should call, Robin and Shatman.

For 35 yrs. I worked in the sewer dept. of a municipality. Think washroom cleaning on a city wide basis. Skin cleans up well and it kept food on the table. I once heard an older sewer worker say “It may be shit to you but it is my bread and butter.”
cheers all.

That’s a good point.
There are a lot of people, myself included, who tend to complain too much, about unpleasant work. Hm.

“It may be shit to you but it is my bread and butter.”

Lol, he made it worse. Clever old coot.

Employee appreciation day should include allowing the employees who actually work to drag aside 1 problamatic customer along with 1 do-nothing employee and flog them both.

Any customer that wants to pitch an unjustified fit/tantrum gets pressganged into working whatever position the employee they’re going off on has for the rest of their shift. Without pay, of course.