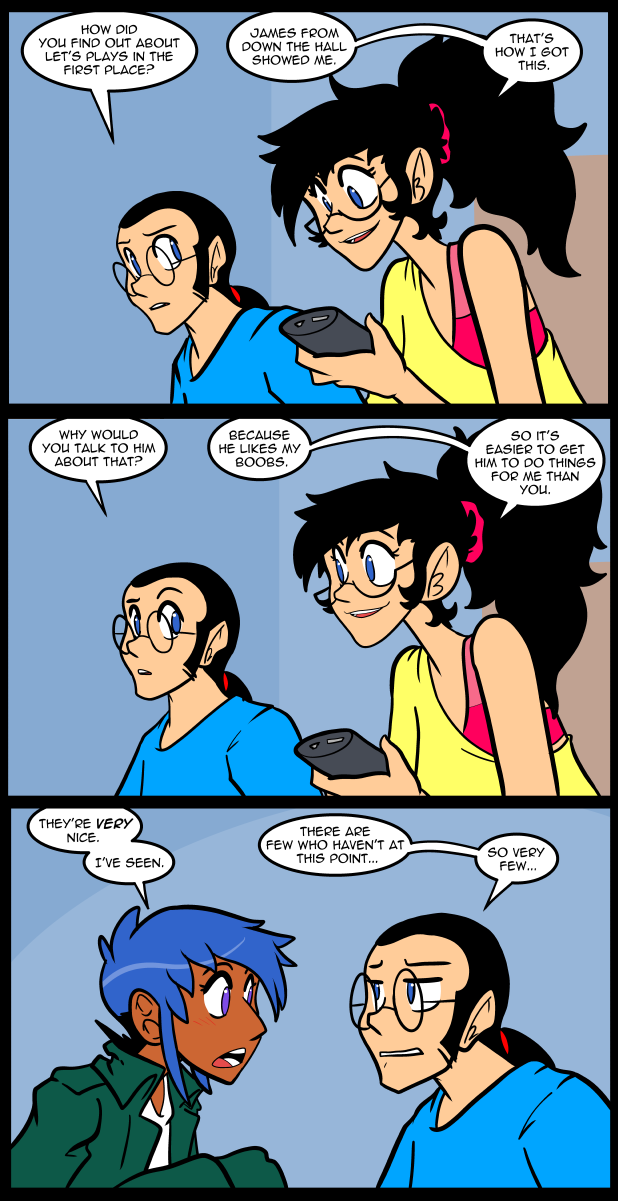 In case you’ve forgotten who James from down the hall is, you can go back to here: and have a look.

Ah yes. The power of boobs.

…’Cause it won’t last forever.

There are two real super powers in this world, money and boobs.

That’s three, by my count…

This is probably “Too much information”, about me. Regardless, of that I thought I’d tell some people this info, anyway.
Jackie’s thoughts about teenage years, + high school years, made me think about some of my own teen years-

My family moved a lot. From about the years of 11-17, I was…pretty much…despised…by the kids I went to school with. Or, I guess, if they didn’t, in reality- hate me as much as a piece of crap, they certainly treated me as one.
Their reasons- they imitated their parents, who were almost all business people: with ruthless, shark-like personalities…personalities that said: “crushing people, + emotionally hurting them, is fun”.
Also- these were back in the years, in the USA, where most cities + towns didn’t see violence done to kids…by kids, as any kind of a problem. So- the boys/males liked to challenge you to insult fights- and…if you were good at them…they would get mad + get violent with you. Or, if you were bad at insult fights, then they’d keep insulting you until you were almost on the edge of tears. Nice people, huh?

I suppose I was kind of lucky- I was nearly 5’10” to 6′ at age 10, so most kids didn’t want to punch me + attack me, because they thought I’d really splatter them if they got into a fistfight with a guy as tall as me. Still…being in a harsh culture of verbal abuse + physical abuse, for that many years, doesn’t leave me with a big group of fond memories of that town…or those years. Those years are sort of like going through a Driver’s Education class to me, as in: [Ok, I did that. That was a thing. It’s gone]. I don’t draw any happy memories, or “gosh, what a good time that was”-type of feelings, out of those years. That’s all.

Been there, done that, got the T-shirt. I was smarter than more than half the kids in my classes, wore glasses from Second Grade on, and was always the little fat kid. That changed the summer before I was a Junior. I grew two inches, taller than most of my tormentors. The bullies who used to beat me up started getting seriously injured, so they stopped.

See? And I thought it was because my father was the principal of the school I attended.

That was just the excuse that particular tribe used.

In my experience, people are just small-minded, scared, abusive, jealous, angry little a$$-hats who like to export their misery. As they get older we [sometimes] just learn to hide it better.

Preaching to the choir.

Thankfully, despite starting high school at 5’2″ and ending at 5’5″, I had pretty broad shoulders (21″). So, the ones that tried could never stuff me in a locker.

I’ve been told I’m built like a boxer (more like a sumo these days), so that probably helped cut down on the bullying a fair bit despite my height.

I forgot to say this, about that, when this page was 1st up, but- Thanks for the replies.
It’s good to know that other people can relate, to events done by people who acted like crap…in school days that are far behind, and- to me, are best left back there. They really are memories, that I don’t need to think about, much anymore. Thank you.

I was pretty much the same during my formative years. I was… well, not harassed or bullied to any significant degree, but people’s jokes were… persistent.

In year 9 (I don’t know what the equivalent would be in the US, middle school or something?), I just shut down. Disconnected my heart from the pain (so I thought), just surviving on academia (meh) and a handful of friends (I still talk to one, and have reconnected with the sister of another (not a euphemism)).

It was a spectacular failure. I went to TAFE (community college), and tried to get an IT job somewhere, but because my people skills were so lacking, and because they needed “experienced workers”, all it left me was a massive cup of nope and a shit-ton of rage that likes to pop up whenever I get overwhelmed.

I do better with people now than I did then, but I still have not fully grasped concepts like “friendship”. Sometimes people do things altruistically, but I can’t help but feel like I owe them in some way, like a debt to be repaid. I mean, I do things because they need to be done, or I’ve been asked if I could help, or whatever, and the thought of being “owed” something back doesn’t even register, but I can’t fathom the feeling I get when the roles are reversed…

That debt part is something I totally get. I’m not sure if it’s that I expect myself to be so much better than everyone else, or that I’m so suspicious of other people, but I can’t accept kindness without repaying, whereas I’m just *supposed* to do nice things for people, because I need to justify my existence *somehow*.

Got excited for a moment, thinking man there is a college here in Brisbane called TAFE. Looked it up, generic term in Australia. (I just moved countries so still learning)

Yep, I’ve got a spare capture box in the basement. Practically unused, too; she could have it, boobs or no (I would’a given it to Brooksie, too).

You missed the best part. My family subscribed to two daily papers and a regular Sunday through the ’80s; we most of the comics. The titular character in Mary Worth had a tendency to go on the occasional bender. During these drunken fugues, she frequently murdered homeless people no one would miss, anyway. I think Ernst and Saunders figured it made the strip more edgy.

This is an over generalization – or at least a simplification – but I think everyone carries SOME degree of that kind of anger during their teen years. Your description is pretty similar to my younger brother.I went with the self-direct and internalize route: in other words, I blamed myself for everything, like my parent’s toxic relationship, constant moving and related lack of deep friends, and the low-key resentment towards anyone with the confidence and agency I lacked. Thought of myself as weird and unlock eagle for my seizures and the side-effects of the meds, while at the same time being disgusted with myself for not “getting over it” and making friends, or focusing on what I was good at. In short, I was unhappy because I should have been happy, angry with myself for being angry, and avoided making friends because I was a bad friend. I should-ed myself, which is messy and makes one (s attitude) stink.
I’d like to say that I’ve gotten better, but I’m not sure. My brother definitely has though, so that’s good, and I couldn’t be more proud of his resilience.

The anger thing was in the early school years, maybe due to a yin-yang set of parents.
Somehow I managed not to murder anyone in grade school yet was also the target of near continuous bullying. Maybe it was because of the “incident” that I wasn’t picked on so much as shunned.
Middle school was a transition in a lot of ways both sociologically and psychologically.
High school was not so much anger than isolation. I was the weird geeky kid, a bit heavy, totally clueless on social cues and always trying and failing to really fit in. If it wasn’t for my eternal optimism [I’m a certified pessimist these days] I may have had more than the one breakdown in first year. I joined as many clubs as would have me and that I could participate in back then, yet thinking back I was still isolated / loner. Heck, back then I fit the classic profile of one of those kids who goes postal to an outside observer.
So many years latter I learned why I was both positively or negatively treated by the teaching staff. Combine a stupid Hi IQ with Aspergers – yeah, after a while I learned to “Act” like a normal person but it took till college before I had that figured out. In the interim I read “a lot” of books. Okay, I read ALL the books in every technical section that took my fancy at any one time, plus all the sci-fi and fantasy that I could get my hands on. Video games and computers became my go to once I could afford either and new books were few and far between.
Thinking back I only had two close friends in grade school. One moved to another country and we soon lost track of each other, the other I lost track of once we entered high school due to ending up in different tracks. Only years and years after, and man, I did not recognize them. They had gotten in with a bad crown in high school and gotten into the drug scene for a period before managing to make it out alive but it really did a number on them. I was too much of an outsider that even the pot heads didn’t bother approaching me.
I think I would make a great Hermit-Sage but dealing with people is draining and what they say and do just makes me sad.

Ed’s answer reminds me of Madonna.

Rosie O’Donnel’s character in “A Leaguge of Their Own” made a comment about them.

“I’ve never felt capable of debating important issues in my work.”
Except when you do. All the time. Relationships. The importance of accepting people as they are, or seeking to improve their circumstances if you can. Minor characters who turn out to be multi-faceted and deeper than the main characters in many comics. A loyal readership that cares about you and wishes you the best. I think we’ve seen some important issues in here. As to debating- that takes two parties, and maybe that’s what we’re here for. Your rebuttal?

Yeah, but he makes a valid point.

Also, a high school tale. Coming back from shop class one day, an uppergrader grabbed me. I was confused, at first, rather than scared. But then he hustled me along, and my head into a doorjamb. Not super hard, but far more than was good natured horseplay. He then said something to the effect of,” That’ll teach you to kick X(name). I was pretty surprised, I don’t think X the 180lb 6′ athlete needed protection from 100lb 4’11” me. And, yes I’m a guy.(and a little bigger now).

Read this comic a few days ago, just reread it. Totally missed the joke somehow. When I read the line “They’re very nice. I’ve seen” I had thought we were still talking about lets play vids for some reason. It being about Jess’s breasts makes much more sense.

Yeah, that would skew your results a bit.

Capture cards are a good deal of money to drop!

I would say something about how I was bullied as a teen, but I was the kid everyone knew and wouldn’t hurt for some reason, so I’d just like to say to everyone who got bullied, I’m very sorry you had to experience that.