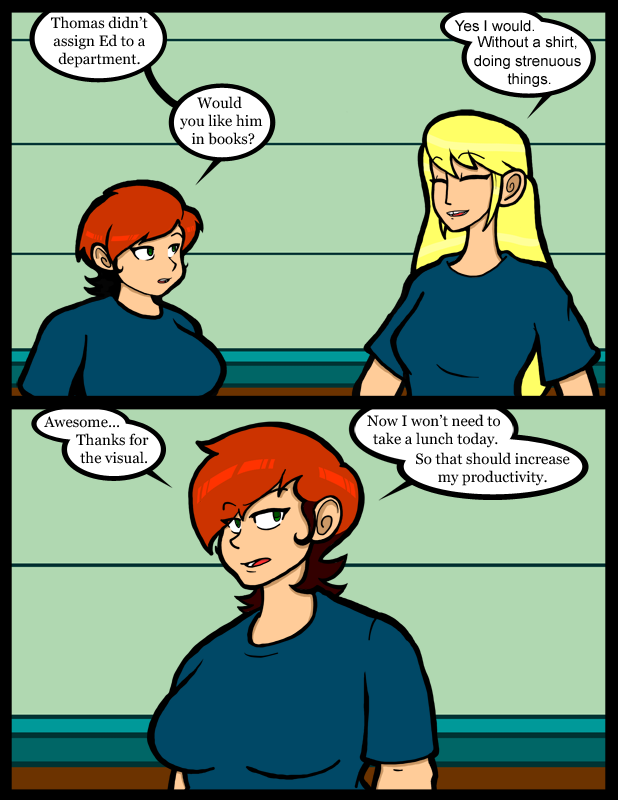 Haha! Nina is just great. I just love how she handles Carol.

I love their interaction.

One wonders if its the Harry Potter glasses or the Popeye arms that really turns her crank… or some combination of the two.

And then I need to find out which, and obtain that for myself.

…..hmmm, nice to see some people from drunk duck, lol

I wish these two worked where I worked…

Nina’s smile makes me happy. Hmm… that sounds like a cool name for a song.

Umm, don’t be so judgmental. There are some pretty good ones in there, just because of the number of members makes the greater percentage of comics disgustingly horrible. Find a good one, though and see what the user recommends and follow the chain of the friends recommends and pretty soon you’ll have a ring of nice ones. For a first time drunk-ducker? I’d suggest UIU or CTV or NPC. Or, if you aren’t a fan of big archives try stuff like Ever hollow. UIU isn’t so bad in the archive department, but sometimes it references CTV, which is over 800 pages in the archive. ^.^; still working my way through it.

I’m a member of Drunk Duck. That’s how I first found out about web comics, and first read this. Drunk Duck is actually pretty cool. I admit the name is a bit….off, but the site itself is pretty nice.

Carol looks plenty productive already… and there is nothing “little” about her.

[Dude… I didn’t just say that, did I? I’m becomine the Uwe Boll of word-play.]

Drunk Duck has some good comics. One I would recommend is Hero by Night.

I came outta ComicGenesis myself.

Well, not straight to here. But I’m hosted there. Got a lot of good friends on ComicGenesis, KeenSpot AND DrunkDuck.

Is it just me, or does Carol’s neck magically elongate at times?

lol nina is such a horndog

So Ed is a cross between Harry Potter, John Travolta and Popeye? Explains his appearance then.

I don’t see why Carol should be cranky. This is day two right? So the previous night she should have been making out with Thomas, and this morning riding on the euphoric high of new love. I know I would.

The cranky is strong with this one. She’s probably most irritated by not being able to blow off work and wallow in love times.

I get the feeling that nina would love to see hairy chested shirtless ed.

also… he did NOT look that buff in his shirt. dude is slightly terrifying. like… damn. I feel inadequate due to being fat. for some reason though I cannot choose who I like best…

nina is adorable in her actions and her sunny personality
carol would be fun to tease in a flirtatious way, and has the dominance to steal a kiss if she wishes
finally there is brooksie, and she is short, shy, and has all these little quirks that make me want to snuggle with her on the couch and watch a movie.

ultimately, not simply because she is fictional and taken by another fictional character, carol is out of the running. because as attractive as she is, and how much fun she would be, I feel like if I were having a bad day and she weren’t aware of it, things would probably end up hurting her feelings.

if such a thing happened with either nina or brooksie, I could imagine nina would hug me tight and make me feel better, while brooksie would be so unlikely to do anything wrong that I could easily take the lead and just cuddle up to her until I felt better.

however, while I prefer short girls to tall, I don’t like smoking… so… it’s a rather sad tie for me. although the slight gap in nina’s teeth is endearing, just like brooksie’s tendency to sneak up on people. both are little details that make the girls that much more attractive, while carol seems a little bit… set on her façade of being the cranker behind the counter. yes she has her moments full of wit, but so do the other girls.

it would be a really tough choice to be honest.