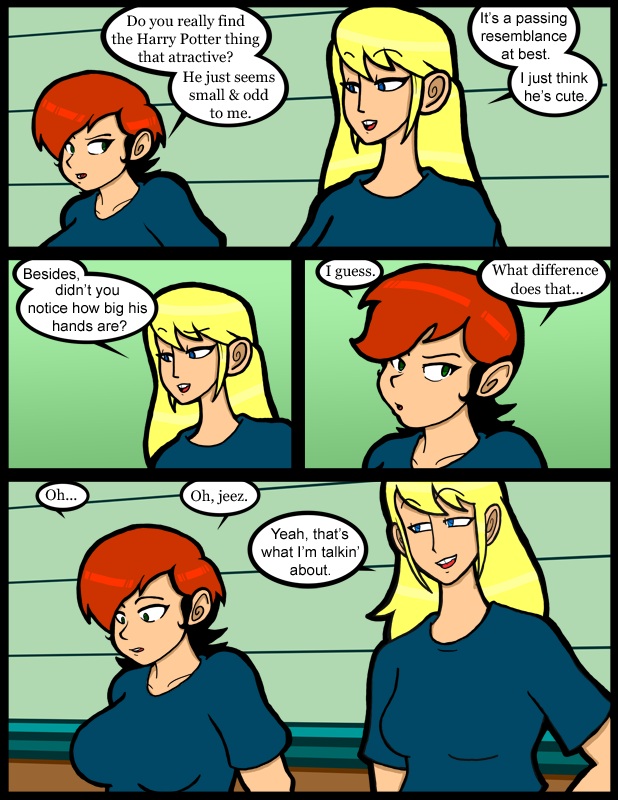 I broke down and got The World Ends With You the other day. I found out that it was going to be a long time before I got Final Fantasy 4 DS, or Final Fantasy Tactics A2. I like the fact that you can not play it but still get experience for up to 7 days. Any game that wants to help me cheat is alright. You can playing in little intervals, and chose when you fight. It works really well as a handheld game. You can turn it on, fight a battle or two, then go right back to shopping, or whatever.

OOOH wandering thoughts Nina. Carol in the last panel is very……well it makes my thoughts wander.

Nina’s got a kinky streak. I like that in a woman… err cartoon???

LOL @ sudden naughty realization. The looks on their faces in the last panel is awesomesauce.

Oh god… Now I understand everything.

XD
one attribute I share being a bassist
lol

TWEWY works better as a DS handheld. Nomura wanted it for the PSP, but that would have just been bad.

Well Nomura is as full of bad ideas as he is in love with Belts and Zippers.

If big hands mean what I think they mean, then what do big forearms mean? O_O

Big forearms suggests a lot of practice gripping things. Or thing. Could mean a special kind of endurance…

Wheeew, I finished the archive. Awesome comic, I look forward to more! And before I go completely crazy, GOODNIGHT!

@H2O, big forearms mean you’re strong to the finich, ’cause you eats your spinach. ;)

Yay! I found another Popeye fan!
:)

JT I think its time for a Forums, give me a Email.

What’s it mean to have big hands?

Men’s hands/feet are meant to be directly linked to their size of their penis. This has been psuedobiology 101.

i know. heheheh. arroused by them thingin bout it

The size of a man’s hands (and feet) are supposed to indicate the size of other interesting parts of their anatomy. :-)

Another of the curious similarities between myself and Ed…. given that I’ve got octopus-hands (aside from the glasses, scarf (though mine is black) mid-long hair, similar choice of wording, similar chest hair patterning, being short, etc).

It is actually getting creepy now…. but then I remember this is written by a fellow male… whose ideas about what the ladies actually go for is horribly inaccurate.

Nina’s face is so perverted and happy, haha

Heheh…I myself have larger than normal hands.

What’re you talking about, SotiCoto?
Long hair glasses short cute guys.. What’s not to like???
It’s just the majority of girls go for your average “bad boy” while ones with sense actually go for the ones who are NICE, for a change..

I was mostly just having sour grapes at the time over the fact that I looked like Ed, but I hadn’t had any coupling luck in a while. A youth’s folly.

Funny thing is… I’ve been single since before then (like… 5 years ago or somesuch)… but I stopped giving a damn eventually, and learnt to actually thrive as a solo entity.
Just as well really.
The deal-breaker, besides that I don’t like people and avoid being around them, is that I always had a habit of reflexively sabotaging my own relationships out of a desire for more privacy. I’m weapons-grade introverted.

The big hands and feet = Well hung is a myth… unfortunately it’s not true otherwise I would be packing ‘a lot of heat’… CURSES!

Tain’t true. I would know. My hands aren’t nearly that small.

Ah, The World Ends With You… that game hasn’t left my top ten list since the day I bought it.

The factor of race too, is mostly a myth (aside from a tendency for more black guys to be taller) at least if you care about size while erect.
Those humans whose ancestors braved the lands that freeze over every winter adapted by loosing much of their skin pigmentation, to maximize the amount of vitamin D they could absorb from much less sunlight… and certain body parts vital to continuation of the species adapted to contract much more, staying close the to body core and its heat when not immediately needed for such, especially so in the cold, to keep our manly parts from catching frostbite, turning black and falling off!

Humans settling in the more equatorial areas kept or even darkened their skin more to protect against the harsh sun where the atmosphere is thinnest and blocking light the least, and male procreative parts had no real cause to shrink so much when not in use, and are free to dangle low.

When it’s time for propagation though, both stand up to more or less the same level, (with individual variances mostly correlating to height, as mentioned).