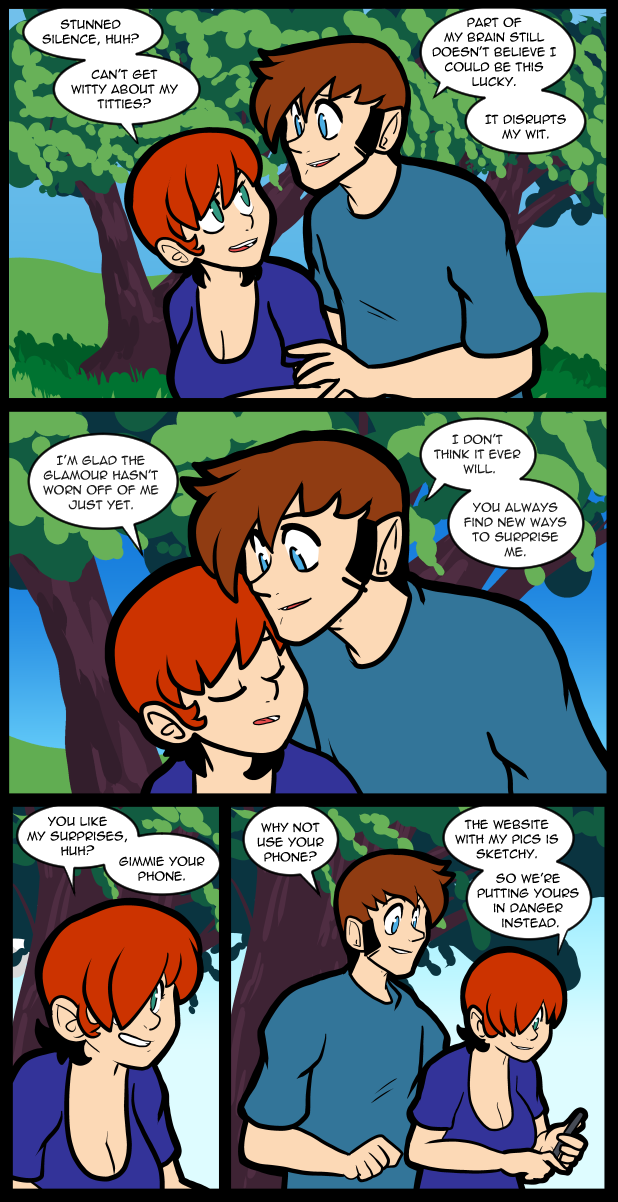 Okay, so here’s the deal: since everyone in my family should be aware of everything going on I’m going to give the general audience some idea of what’s going on. If anyone gets angry they can FUCKING DEAL WITH IT.

My grandfather has dementia & Parkinson’s & can no longer care for himself. The family has been trying to get him in to some kind of permanent care situation, but hasn’t for various reasons. I’m the only one who works from home & can monitor him all day long. Before now grandma has kept care of him, but she went into the hospital for over a month, which is what initially caused the interruption of the comic, & now is back in the hospital for an unknown length of time. My mother is caring for my sister right now, and her household in general. Normally mom would pick up all the slack for most of this stuff, but it isn’t humanly possible for her to be in 3 places at once. So, we’re back to disruption for an indeterminate time. I’ve adapted to the disruption, but I can’t guarantee the updates will be at midnight anymore. I’ll just do my best until this is all sorted out.

The first time this happened it was unexpected but this time it was pretty obvious, to me at least, that the clown car was headed for a crash, so I didn’t bother dismantling the elder care infrastructure here. I can basically go back to the way it was last time. As far as the comic goes it never stopped being filler, so we’re stuck with more for a while.

I apologize for my inability to better deal with these issues, but unfortunately there’s nothing much else I can do. I’m a pawn in someone else’s game for the time being.

Just to be clear, since so many people seem to not be reading this clearly, I’m not ending, stopping, going on hiatus, or anything. I just can’t guarantee that each new page will be up at midnight like usually they are. Also this is my job, I’ve been living off of my earnings for years. So it is a big deal to me. I don’t make crazy money but I can pay for insurance, feed myself, and I could rent an apartment if I needed to. I know everyone is used to webcomic artists just farting off when things get tough but that’s not me. Which is why I can actually do it professionally. I’ve kept things going from hospital beds twice, lived through deaths of family members, helped raise an orphan, and all kinds of things. This is just another thing, it just happened to be surrounded by a bunch of other stuff to the point where even I couldn’t keep up. I’m not going anywhere, I’m just struggling a little.

My man, I am thoroughly enjoying the “filler”. Do whatever you need to do, I, and I suspect most of the regulars, aren’t going anywhere.

Thanks for the update. Entirely understandable. Your dedication to your comic is some of what I really appreciate about you as an artist. Been following you for years, and I can’t see why I wouldn’t be following you for years more yet :). I hope things get better for you soon. Struggling family members is always a trial and always sucks.