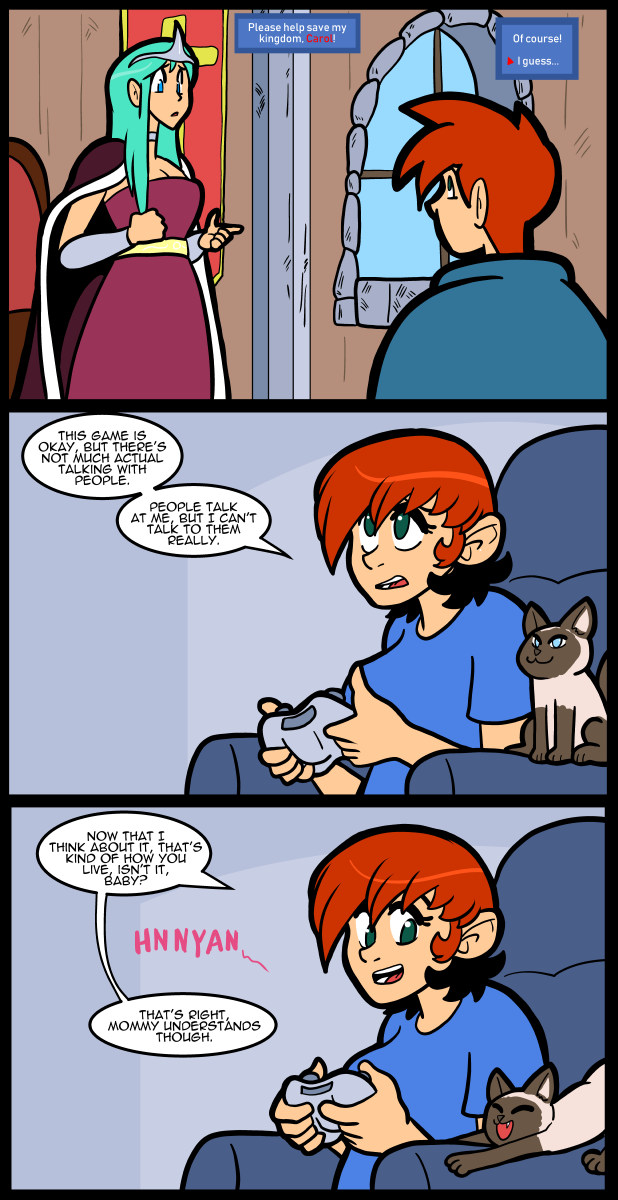 Happy new year kids. I hope it’s better than the last one.

I’ve been in the car all day, haven’t slept much, and am in a lot of pain. I hope you’ll forgive me if I don’t talk at length. I really want to lay down.

While I think the idea in the title is that of “To, not at”, the absence of the comma put me in the miles-high curiosity of puzzling out the nature of an activity, expressed as an intransitive verb with PP complement, whose theme can only be expressed as negation.

Art thou the descendant of Erdrick? Dost thou have any proof?

>No
But thou must!

Dost thou have any proof?
>No
But thou must!

Dost thou have any proof?

You can’t be Me! I’m me. I think. Can I have stopped being me, and not even noticed?

You are me, but I am Me. Clearly different names. You are not Me.

“These are not the Me/mes you’re looking for. And incidentally, don’t you remember you still owe me $20. (If obi Wan were more mercenary.)

Despite everything, it’s still you.

And This… Is a snow Poff.

No, she’s Thai. ;) (We’ve had this conversation before. Look toward the bottom.)

Most Disney animated movies are overrated. But that song is not.

Oh, Glory. Now I have this music video running in my head. Someone singing Pooping out Rainbows to the tune of Walkin’ on Sunshine.

I used to read your comic all the time and then fell away. It was honestly not at all related to your comic; I stopped reading webcomics in general for a while. IIRC, work and school-related stuff meant I couldn’t spend as much time online as usual. However, I’m not working right now (I’m a college English professor and it is the winter intersession), so I decided to get caught up on all your entries that I’d missed.

I am really sorry about your puppy. One my my kittens (she was probably close to 20 years old but I call all my cats kittens and also call all dogs puppies) died three (?) or so years ago of kidney failure. My partner and I actually had to make the decision to have her put down because at the end she had no chance of survival and was actively in major pain. I am STILL not over it. She shows up in my dreams sometimes. I think that the death of pets gets downplayed by people and society in general. Losing a beloved pet is a MAJOR loss for many pet owners.

I hope you’re taking care of yourself. I’m intimately familiar with medical problems that are not necessarily life-threatening but ARE painful and super annoying. I have a massive DVT in my inferior vena cava (which you *might* recognize as the biggest vein in the human body *sarcasm filter*). As a result, my circulation is lousy. I have to wear expensive support hose that is NOT covered by any insurance I’ve ever had. I take blood thinner every day and will have to keep taking it for the rest of my life to make sure I don’t clot again (my clot is apparently the result of a hereditary blood clotting disorder). I require a TON of sleep – at least 9-10 hours per night or I get physically ill. One of the things I’ve discovered is that an underlying medical problem affects your entire body in ways you might not expect. For example, the sleep thing. Also, when I wake up in the morning I am pretty much non-functional for about an hour or longer because I am also hypotensive due to my circulation problems. I am lucky to have a job that is willing to schedule me to teach in the afternoons and evenings. While I’ve been prone to depression my entire life, my depression got a LOT worse after the blood clot formed. More than one doctor has used the phrase “medically-induced depression” about me. My medical problems actively affect my emotions and my state of mind. Even seemingly small things like my fingernails are affected; apparently taking blood thinner can make your nails thin and brittle. So I have short nails now. What I’m trying to say is to never underestimate how much medical problems can affect every aspect of your body, mind, and life. My clot formed 20+ years ago so at this point I’ve pretty much acclimatized to it and have learned to adapt. I won’t lie – it still sucks and will continue to suck. Please be gentle with yourself. Also be aware of the consequences of pushing yourself beyond your limits. I have a bad tendency to do that sometimes and the results, for me at least, are never pretty. It’s better for me to take a little more time on things than to push myself and then spend at least twice as much time essentially being non-functional until I recover.

I have to give you major props for the way you depict women in your comic. It’s really wonderful to see “larger” women as main characters who, moreover, are pursued and considered attractive by other characters. This is rather personal to me because I am kind of a “larger” woman myself. (My body type is actually quite similar to Carol’s except that I’m taller than she is.) I used to be very skinny when I was younger but age, a sedentary career, and this one medication I was on a while ago that made me want to eat ALL THE THINGS ALL THE TIME caught up with me. My long-term partner tells me I look great and I still get compliments from other people. However, to some extent I’ve sadly internalized the U.S. “beauty myth” that asserts that dangerously thin = beautiful and sexy and not skinny = ugly and disgusting. So I really appreciate the representation of different female body types in your comic.

In one of my comments a few years ago (I ran across it in my archive binge) I complimented you for being such a positive male role model in the Teen’s life. I’d like to repeat that now. While I am not and never will be a parent, I *do* teach students, some of whom are teenagers (freshmen). I can say with some assurance that sometimes it takes quite a while for one’s help and guidance to sink in, and you never know exactly how that’s going to happen. Doing the archive binge really highlighted the change in the Teen’s posts from soon after her father died until when she was in college. Not only did her grammar improve significantly (yes, I’m sorry but I always notice that whether or not I want to – English professor in the house!) but also her maturity level seemingly increased. I have no doubt that is mostly due to you and how much you guided her. It’s easy for me and maybe other women to get jaded about men in these post-Weinstein days. (Trust me, neither I nor most women I know were at all surprised about the revelations regarding how many powerful men have harrassed and/or assaulted women. We all live with this. I don’t want to have a #metoo moment all over your comments section, but I have been sexually harrassed and assaulted. And what I’ve suffered is *mild* compared to what a lot of women I know have suffered.) It’s just cool to have confirmation that sleazeballs like Weinstein are the exception, not the rule, and that there are great guys like yourself out there. :)

Please take care of yourself and I hope the new year is kind to you. I really enjoy your comic and will be reading regularly again. After my archive binge I started thinking about why I enjoyed reading your comic so much. I realized it was because it’s not mean-spirited in any way. Take it from someone who makes their living reading things and thinking about those things: too often “mean-spiritedness” (yes I know that is not really a word) gets taken as depth, or “cutting-edge,” or incisive and insightful. I say *expletive deleted* that. There is enough meanness out there right now, especially so since Trump seems to have “turned over the rock” and revealed all the vermin of xenophoia and hatred of people in the U.S. We need more kindness and more empathy and I honestly think your comic (and blog posts, of course!) is helping to provide that.

As a final note – do you mind if I reference your comic in my teaching and/or professional work? One of my areas of speciality is feminist/gender theory and I’d like to use your comic as an example of positive representations of women. :)

There is so much here I’m having trouble parsing it in to response chunks. Most importantly if you want to use my work as a teaching tool go ahead on. It’s ironic to me that you see it as empowering to women when i’m so often criticized for the opposite, but if you can make the counter argument I’m all for it. I just try to make all the characters complete beings which is a sadly low bar in media.

I may have to respond to this whole thing in a blog post the comments aren’t really sufficient. I’ll get back to you on the rest. Thanks for taking the time to comment so thoughtfully regardless.

So Nina is both Party Member and major plot NPC?

She only shares surface design elements.