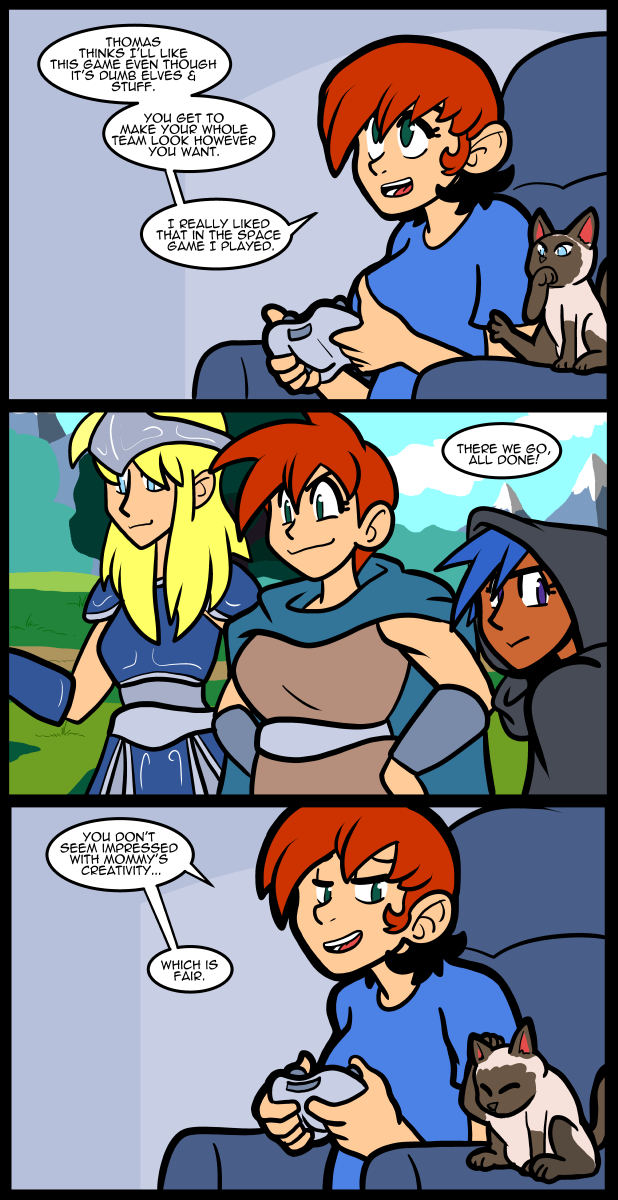 It’s very likely that Carol didn’t have a console before she played that space game. Maybe a 3DS or something, some phone games, but not a console. Now though, she has one of her own so she can play multiple goes of games she likes. In spite of her adversarial language she obviously enjoys games.

I honestly don’t want to talk about Solomon a lot. Not that he wasn’t a good boy, who I loved, but I’ve spoken so much to so many people that I’m exhausted by not being able to emotionally process his death in my own head. There’s a big empty space in the house where he was, and it hurts especially since he died on the same day as the Teen’s dad after Xmas. He went quickly and peacefully, which is as much as you can hope for. He was a lovely, kind, gentle, dog who would have been a good pet for anyone, but I had the privilege of him being one of mine. I’ll miss him and his funny ways forever.

Important processing inside one’s own head seldom is.

Talk about it when you’re ready, and not before.

As a cross-player, when I can choose to customise my character, I will either play a groovy old man or attractive young woman.

a groovy old woman, or an attractive young man?

Here’s a well-known eulogy for a lost dog. Enjoy it at your own risk.

We give them food, water, and shelter and what do they give us, unconditional unretractable love. Is it any wonder why they’re called mans best friend?

Solomon Grundy born on a Monday.

I had a Black labrador growing up. his name was Shadow. and he was the closest thing to a brother i ever had.
my parents got him as a puppy on my first birthday.
he and i learned how to swim together when my parents tossed us both into a pond.
He saved my life more times than i can count. when I was younger, my epilepsy was really bad. Shadow would sleep at the foot of my bed and if i had a seizure he’d go wake my parents.
he also put himself between me and a water moccasin and got bit in the face for his trouble.
on december 27th 2001 he passed away at the age of 15. peacefully asleep in my father’s lap.
I remember my father sitting there petting him with tears in his eyes. saying to him,
“it’s ok boy, you can go”
that was the only time i’ve ever seen my father cry. not even at the funerals for my grandparents.

The “Space Game” was Mass Effect, right? Is this based on a real game too? Cause that sounds awesome.

If I had to guess, I’d shot in the dark that this was maybe Dragon Quest? The style looks really, really similar to Dragon Quests’ character design, but I don’t know of any Dragon Quest that has both an art style like this and allows you to customize a full party. Most of them are smaller sprite styles to my knowledge.

Dragon Quest 9: Sentinels Of The Starry Skies for the DS allows for full party customization, starting with the main character then allowing you to add members later. It is the inspiration for this.

So does this mean that we get to enjoy a multi-year side quest into a webcomic version of the fantasy stories you’ve been writing “on the side”? I’m down for that, if you are, but just remember that when Bloom County went there, they never really came back…

Bill the cat is awesome no matter what

I think this game might be Dragon Age, the kind of fantasy version of Mass Effect. I know what its like losing a family pet, it hurts as much as losing a person who you loved and cared for because that’s what a pet is pretty much another person in animal form.

My condolences for your dear dog.
I did want to make a comment last strip about how well you know what goes down (mean ol’ Mr Gravity) with big-busted ladies, but it seemed crass when you were bereaved, but…oh crap. Still crass, but I really did appreciate that.

I’m sorry for your loss, Jackie. We lost a family cat in December, too, and it was hard. Morrie was 15 years old and a very sweet boy. My wife and I have lost five cats now, and it’s always hard. They are members of your family, simply enough, and losing family is never easy. Hope you’re starting to feel better now.