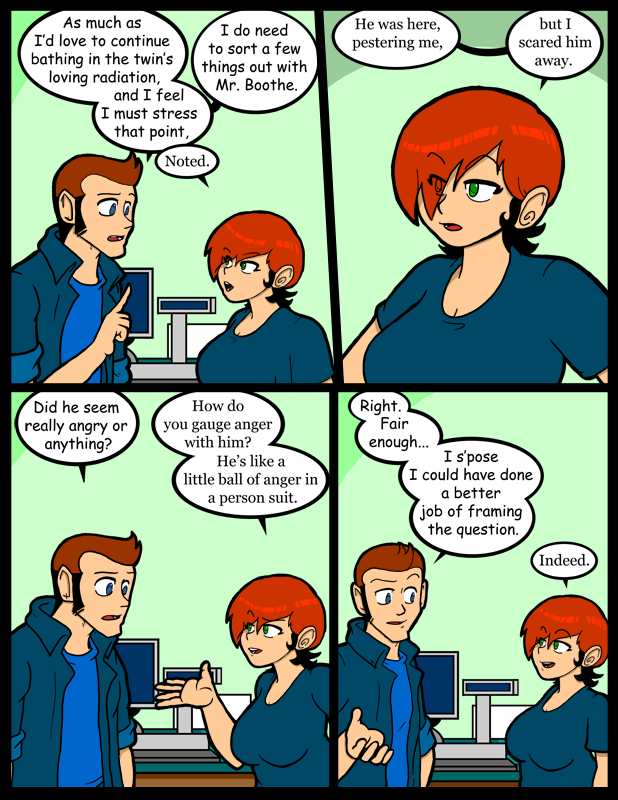 You know, I’ve been playing Animal Crossing: City Folk for a few minutes, every night, for nearly a year; and I still haven’t gotten a golden axe from the fountain goddess.  I can’t even remember what I intended to do with the damn thing now.  I’ve completely lost sight of my goal.  The only thing that keeps me going is the twisted desire for a golden axe.  This mode of thinking is not unlike what living for revenge is like.  What do you do once you’ve achieved your goal?  Just go on with life or, in my case, cut down a whole bunch of random, computer generated, trees?  I already got a silver axe, which never breaks.  That’s really the only selling point for the magical axes as far as I know.  I’m not sure in what way a gold axe could be better, I just know I don’t have one, and it vexes me.

I actually had a “perfect” town for at least a month.  Long enough to get the golden watering can at any rate.  Once I got it I decided to cut down every tree in the town and remake it according to my twisted designs.  The northwest area of town has nothing but Cherry trees, except for a few apple trees around my town fountain.  Apples are the native fruit, so they are worth less than other types, but I still like how they look.

The northeast quadrant is all peach trees.  Placed closest to the store because I like selling them best.  I like selling groups of the same fruit at a time.  Honestly there’s no benefit in doing it that way, it’s just me bowing to an obsessive compulsion.

The southwest corner is pears.  I like them least, and I spend the least time in that part of town.

The southeast corner is orange groves, except for a few apple trees near my house.  Oranges are there because that section is nearly the entire southern part of town and oranges are more equatorial than other fruit.  Also I like them near my house.  There are several coconut palms along the beaches as well.  They only produce two fruit per tree, so I didn’t give them a lot of real estate.  Just enough to look cool.

My lighthouse is in that section of town too.  I could have had a windmill, but who ever heard of a haunted windmill.  You can’t go in the lighthouse, but I expect it’s haunted.  Some poor animal probably jumped to his doom when I wasn’t looking during the week it took to build.

My house is pretty cool.  I have Jacob’s Ladder growing all around it.  I always knew them as Lillies Of The Valley, but whatever, they’re cool looking and you can’t buy them.  I’ve got a lot of complete furniture sets, but not the sets I want most yet.  I have to wait till Halloween to get that furniture, and it’ll probably be a real bitch.  All the special sets require that you do a bunch of bullshit tasks to claim them.  At least it’ll be a Halloween themed bullshit task…  I saved all the candy from this year so I’d have a good chance of getting everything.

I’m also one piece of furniture away from having a complete Kiddie Set, but that bastard, Tom Nook, won’t get it in the damn store.  Oh how I hate him…

Leatherface knows all about Person suits.

I know exactly what you mean about that Kiddie set, I still haven’t got a Kiddie carpet after a year of going in and checking if Nook had it, every day…

So being that her shirt is stretched out, are we going to be treated to Carol Cleave for the rest of the chapter?

J.T. – Till it goes back to it’s regular shape. When you abuse a shirt that way it takes time for it to forgive you.

Actually,girl shirts aren’t that forgiving either,especially if your stupid enough to get one with that plasticy print decal stuff.That just cracks annoyingly.Im afraid all you guys are going to have to put up with Carol Cleavage until she puts on a new shirt,and then you’ll see it if she wears that one again…what ever shall you do you poor poor things =p
Oh,and can someone hit Reggie again soon,tha was just fantastic to see XD

Ok, time to put my spcialized ninja skills to use.
I’m a Perv Ninja, I can only be sneaky if it’s perverted too.
<>
Hehehehehe….