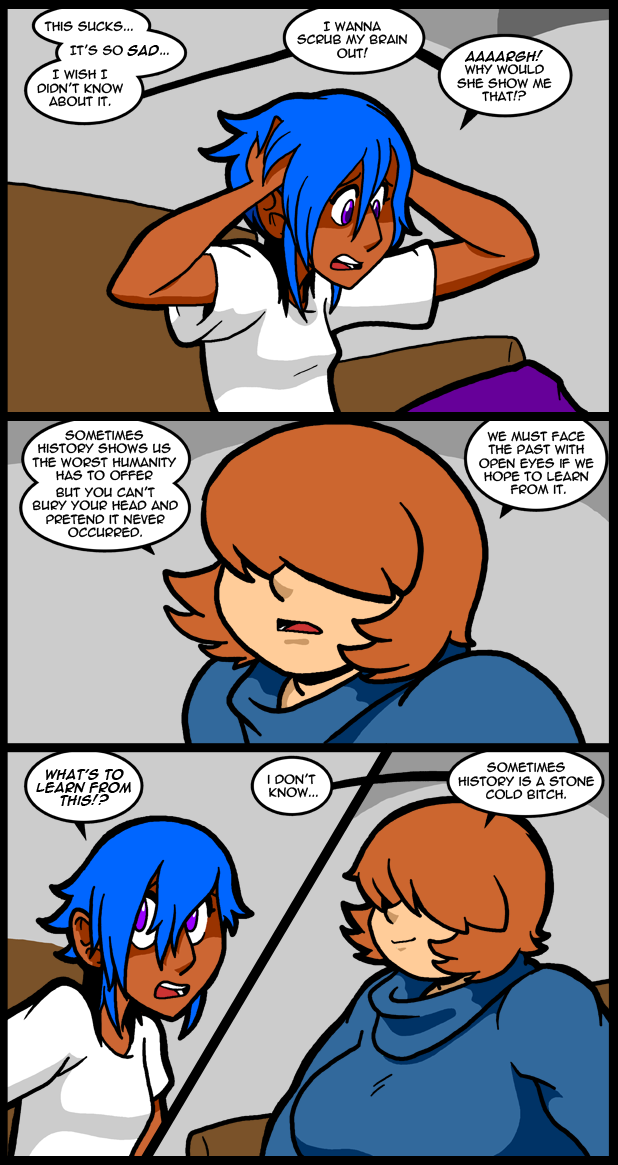 The Teen is writing a short story about me. It’s called The Ruiner. I gave her the title and she ran with it. She is slightly obsessed with the idea that people pay attention to me and now is beginning to want you to pay attention to her too. Anyway, the long and short of this is she wants you to read her story when she finishes it. I suspect so you will praise her. Who knows, she may actually be worthy of it.

We are settling down to watch the new Godzilla movie because I refused to watch The Fault In Our Stars. I’m not prepared for that sort of film at the moment. Anyway, that is why this post is so short, because we had to go to the store and get said films. I say had to, when in fact I was held at scream point until I relented… XD

yea history can be cold trust me on that one.

History sounds like it has a wrestler’s name which actually makes sense in a way.

No spoilers. Godzilla was a super good movie.

Godzilla’s an awesome film. Hooooly crap is it awesome.

Okay, it’s “Wow, it’s got Bryan Cranston in it,” good; but is it “Hooooly crap, it’s a Michael Bay film” good?

I’m somewhat confused. You’re putting “Michael Bay film” and “good” into a sentence without a negation? ;)

But seriously: The movie is awesome and way better than anything I’ve seen from Bay over the last years. I never go to see a movie twice in theaters. Like ever. I did with Godzilla. First with a few friends and when my brother said he’d go watch it two days later I went with.

I have seen exactly one (1) Michael Bay movie, Armageddon with Bruce Willis. All three sucked — the director, the actor and the movie.

…to which I wholly disagree.

But then, you’re the perfesser .

So, let me get this straight. First came the title, “The Ruiner”, and then came the part where it was about you. Have I drawn the wrong conclusion? If I have, please clarify.

She does realize we’ll only praise her work if it’s worthy to be praised, right? She also realizes that our praise has no bearing on what kind of person she is. It especially means nothing when weighed against her worth as a person.

Just so I’m being perfectly clear, her value comes from her being human. She doesn’t have to work at being something great to have great value as a person.

Having said that, the screaming to get her way would not endear her to me.

I like making fun of song lyrics, especially insipid popular lyrics. I also judge and comment upon everything and everyone she knows. Because of this I suggested the title of The Ruiner. I ruin everything she loves.

You are the cold bucket of reality in the morning.

And that’s a good thing…

Ah, yes. My older brother was sort of like you.

As an example, Your Mama jokes never really rubbed me the wrong way. The first person I heard them from was my older brother.

She’ll be fine as long as she gets the point that she doesn’t have to take everything seriously.

> She’ll be fine as long as she gets the point that she doesn’t have to take everything seriously.

Sigh. I know people nearly 50 years old that have yet to learn that.

You can either run from history or learn from it.

(swings stick at Simba, who dodges the second swipe)

“There, you see! Now what are you going to do?”

Oh yeah, being an aspiring historian (by this I mean I’m well on my way to becoming one), I can atest there’s always those days the horror humans are capable of will get to you… I at least have come to see most of it is done out of sheer evil, selfishness or pettiness. These three reasons are uncomprehensible to me, and make me sad and hopeless to contemplate the consequences they bring about. The lives lost or ruined. And in the end you also have to face the fact that there’s no sense to it. There’s no upside, no compensation, no fairness. It’s bleak and invites despair sometimes.

Thankfully, there’s also those days humanity’s marvels, all it’s great works and little wonders will make you proud of being part of it, and happy that you get to experience the past and present from a somewhat “privileged” vantage point. There’s also the joy of getting as close as possible to being able to comprehend how society(es) came to be as they are today, and how the people who were part of this process thought, felt and lived their lives. This is what keeps me from being permanently surly about my chosen profession. This is what makes me love it.

Well, by all means, submit her work to the wide, wide Internet and we will treat it with all the care it deserves. I regularly make a habit of helping my friends better their writing, so I hope I can lend my budding talents to a budding writer.

Yesterday I finished _King Leopold’s Ghost_ about the Congo under King Leopold.

It’s possibly the most horrifying book I’ve ever read.

And the worst part? After chapter upon chapter of atrocities, the author makes the point that other African colonies, under a variety of national governments, were _just as bad_.

Oh my. Before she does this posting, please please have her do this. Have her go to youtube and look for people who post videos of themselves doing something, like playing the guitar. Tell her NOT to watch a video, just read the comments below. ALL OF THEM. Only then have her watch the video. IF, and that is a big, horribly huge, tremendous IF, she still thinks she can deal with ‘truth’ from anonymous, let her post her story. But when she spends the next month crying to herself, …. I told you so.

Teh Interwebz HATES you.
Deal with it.

Well, I’ve posted some stuff to the internet over the past twenty years or so (Google my handle and you’ll find some); photos, stories, a drawing or two. Reception has been, well, mixed. The worst ‘criticism’ I’ve had comes from the Flame Trolls on Flickr, of all places. There are in-duh-viduals out there to whom “THIS SUCKS. YOU SUCK” is a valid and useful critique. I usually tell myself that they’re no-talent bandwidth-sucking crack babies. So far, I haven’t been proved wrong.

Of couse, Flickr has this great feature: if Salomone ticks you off, you can ban them from your photostream. They can’t comment on or collect your photos in their favorites. They can’t even eMail you to bitch about it. And it makes their existing snide comments go away.

My point (and I do have one) is that the Internet is a great place for displaying ones’ art. I, personally, look forward to The Teen’s work. That said, one should, as @Chris pointed out, steel oneself for the flood of admiration and the occasional hurtful bully.

Who is named Anonymous, is forty years old, balding and lives in his Mom’s basement.

In regards to the comics, I’ve had the mindset to try to learn everything I can from people around me. Also, to try to be as positive as I can.

On rare occasions, the only lesson worth learning was how not to be.

I think Abraham Lincoln said something like this back in his day.

My only advice, warn the ‘Teen’ to not take negative criticism to heart. there are many trolls out in the net that have the sole goal of ruining other peoples hopes, dreams, and lives completely.

And yeah, sometimes history and life can be a bitch that is colder then the artics in the winter, and in the cold the reason is thrown away and logic is nothing more then a word in a long forgotten dictonary…

I am not sure what sort of critique I could give despite working on writing a book series, but I will try to give as constructive criticism as I can. As for the comic, just think of war itself and all the horrible things that are bound to happen. History is indeed cold stone.

Godzilla was incredibly boring. Huge letdown, I thought they were going back to the roots with that one. Emotionally void.

Hi Jackie, [Well first, May I call you Jackie?],

If you think it’s a good plan:

If the Teen wants attention, similar to the att. that you get, my two cents would be- offer her the idea of starting a webcomic, or a similar thing, of her own.

Maybe that would get her attention, like the att. that you are getting.
Later Days, TRA

Your commenters are probably some of the best mannered on the internet, so I’d be less worried than in some venues, but, that being said, can you moderate her comments? If someone is just being hurtful without constructive input I’d see no reason why you shouldn’t remove their comment. No matter what you think of a creative effort, if you’ve got no advice for improving or constructive change or an image or turn of phrase to compliment-your opinion does not add to the discussion.

The moral of the story is that “Life’s a bitch and so am I.” I believe that’s how the phase goes.

That first panel is so cute. :) Don’t give in. Never watch “Fault”. I don’t know what it is but I assume it’s about young love and possibly cancer. I don’t know. I’m sure there will be both sap and angst in ample supply. I have my own, thanks. I don’t need it from a movie. :P Or if I do, I’ll make sure it’s something terrible/awesome. Like that movie about the gate to the stars. Or that syndicated series based on the movie.