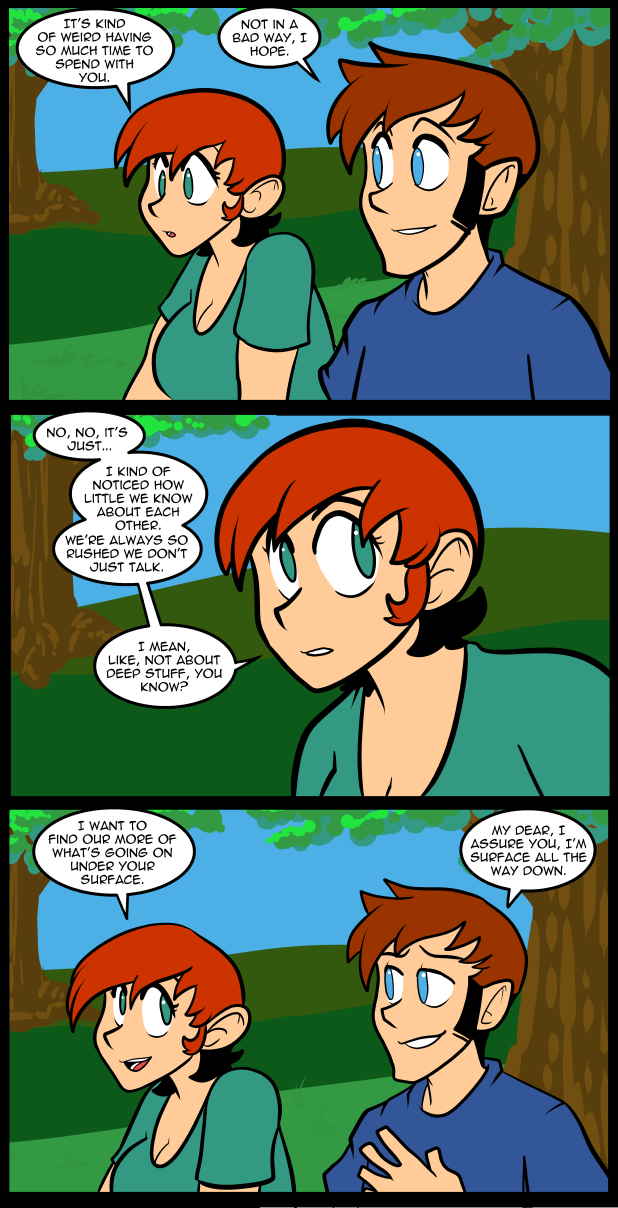 This is a Thanksgiving week comic. It really shows. I struggled to get this to a presentable state. There comes a point with a lot of these where I just have to accept what I have time to do, have the energy to do, and have the skill to do. The constant struggle between those forces is always riding along behind me. It is incredibly frustrating not being able to deliver the level of quality I know I am capable of.

The sight in my left eyes has diminished noticeably and the right isn’t as good as it used to be either. I’m going to have to go to the optometrist soon. A certain amount of the impaired vision is the constant allergies that relentlessly attack me, but some of it is age, or whatever malady might be plaguing me. I’ve got a genetic soup for possible eye problems, so I need to keep ahead of it until they get the robot eyes sorted out. I think poor lighting might be playing a part in all of it too, because these florescent bulbs just don’t seem to give off the right kind of light. I need to take care of this as soon as I can. Probably after xmas unfortunately so I can build a little money for whatever needs to be done. My insurance won’t help much after the first of the year since, apparently, it will reset and my massive deductible will renew itself. The one that I failed to exhaust even after two hospital stays and an insanely expensive cpap machine… (Which I still getting nebulous bills over…)

I need to get into storage and get some more stuff up on ebay. I’m hesitant to go down there though because some water got down there and I’m afraid it will have given the mold something to work with. It makes my allergies flare up something awful when it does. Maybe I should invest in one of those futuristic looking breathing masks. I can pretend I’m scavenging in the wastelands while I look for stuff to sell.

I found my DVD of MST3K the movie in a box the other day. I’m not sure how it got there. In fact, since the Teen has taken on the habit of lending my DVDs to her brother I can’t find a lot of them at the moment. The alphabetical order has been corrupted. Things are missing. Deterioration has set in.

It would be cool to put a bunch of stuff on a thumbstick, or something. I used to have a few things saved as video files so I could take them places without fear of losing the master copy, but I deleted them for space and never got to a point where I could copy them again. Memory has kind of caught up to me again so I could potentially do it if I made the time… and bought something to put them on. It wasn’t an issue for a long time because Netflix had a lot of my collection on demand so I could just watch it that way, but now that they have to compete with more services they have rotated out a lot of stuff. None of the other services have them either, so dealing with my physical collection is starting to seem like a worthwhile option again.

I’m really sick of feeling like I’m scrambling to accomplish things I used to be able to get done quickly, and with at least some level of quality. It wouldn’t be so bad if it felt like things were getting better, but they just aren’t, and it’s really starting to wear me down.

In spite of that I actually bought some newer animation software so I could play around with that, and some watercolors to see if I could maybe make something with those that people might like. Looking at Amber’s art on my desktop all the time finally inspired me to try. Much like reading other webcomics made me think “I could do that…” If history is any indication I will be showing you substandard watercolors and animations at some future time…

Also, honored I made the desktop cut. :)

U less that’s another Amber. Then i’m just…. uh… who stole my phone and posted nonsense?!?

I think you’re the only Amber I know, possibly have ever known.

It’s a very common name, though I didn’t meet another until Jr high. I used to think it was a rare name because I could never find a key chain.

Um, I swear you’ve already put up this comic and blog title before…

That sort of thing happens with long running comics sometimes. Wapsi Square has quite a few repeated episode titles.

Thanks for putting in the time and effort; getting to see these characters being cute whike advancing the plot is much appreciated.

If you think there might be mold in your storage, get at least a good dust mask. Honestly the $5 you spend on a disposable mask is well worth the discomfort it prevents.

Take a break if you need it, we can wait.

Meanwhile, back at the plot.

It looks good to me. It looks like a very good Between Failures page.

So there’s no meat or bones? Cannibals wont like you then.

I don’t know- you could always take a hide-only monster or alien, and make it into pork rinds.

Thomas’s relationship is going to end the same way as before with Dawn, if this is how he behaves during conversation. Unless he’s a maniac with literal skeletons stashed everywhere but the closet, or an assassin who needs to keep his affairs secret, then he should NOT DEFLECT her questions!! This is the behavior of the douche nozzle, not the reserved gentleman.

Under the hood, Thomas is a lot like a Tesla car. Not much there, and he constantly needs to be plugged in.

In the last panel I think Carol meant “out” rather than “our”.

Under the surface, Thomas is… more surface. Whatcha see is whatcha get.

Smarmy responses may sound good at first, but a healthy relationship needs open communication, not deflection. Thomas has a ways to grow still… but hey, that means we get to watch it happen.

He’s no onion that’s for sure

Hang in there Crave~ you are doing great. Also for the eye thing…are you consuming a lot of sugar? diabetic/too much sugar is known to cause blindness…

Is it just me, or do the eyes seem…shinier?