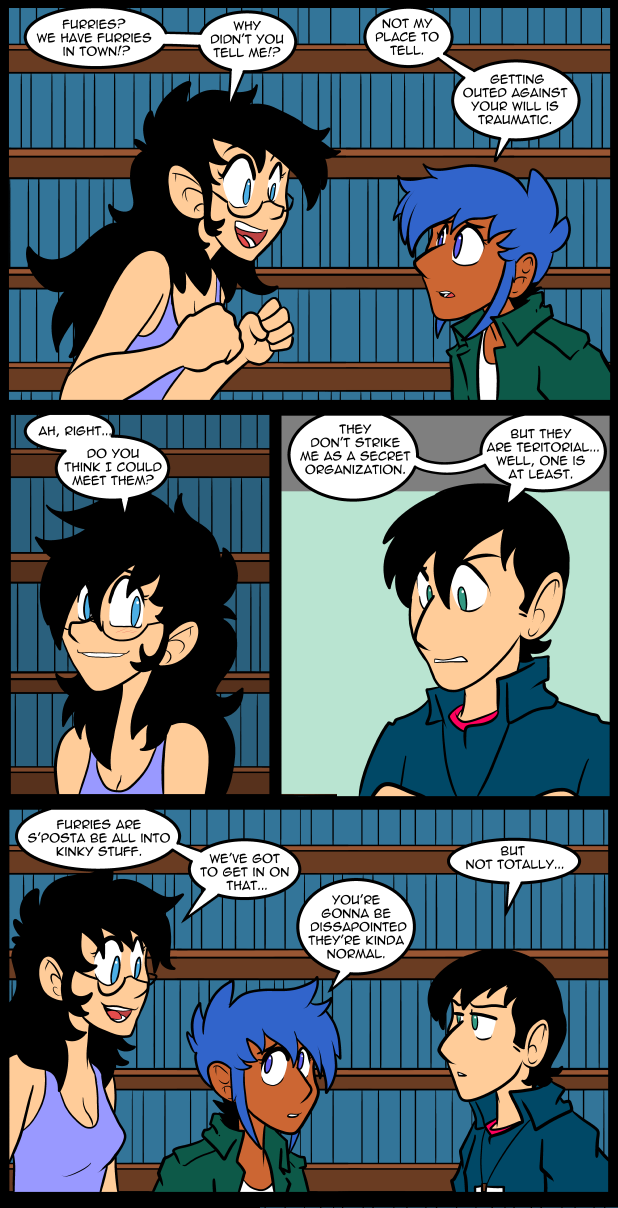 Jessica very much wants all the hearsay about furries to be true. Unfortunately for her they are basically the same as any other group of people. The dispersion of people you can’t stand, aren’t attracted to, and aren’t attracted to you is the same as in the general public. They are not the sensational story the media wants you to think they are so you’ll watch their cloying puff piece before dinner. Still, it’s nice to have dreams. I think Jess is way more free wheeling than any of the members of the Order Of The Pelt. That said, she might be like flicking a lit match into a puddle of gasoline.

Those of you who follow my Amiibo hunting exploits will be happy to know that I finally got Lucina for regular price. It’s an import, so I have to wait weeks for it to get here, but it is secured. At some point I will be able to play Codename Steam with a full Fire Emblem team. I haven’t looked up what she can do in game, but if she’s half as awesome as Robin it will be amazing. He has the best power of all with his fire spell. I like to team him up with the Tin Man so he can take out waves of enemies from up high, then get refilled to do it some more. He clears out annoying little enemies really well so that your other team members can take on the big ones without having to watch their backs all the time.

I’ve pretty much secured all the current amiibo except for King Dedede, Meta knight, and Rosalina. With the others I have a way to get them that is good for the forseeable future, and will retain a normal price. I can pick them up whenever the budget allows. Hopefully those three will get restocks and I won’t have to scramble to try and pick them up at random. I left the Kirby guys for last because I don’t really like them anyway, but if I can get them for shelf price I’ll complete the Kirby set. Rosalina is still a Target exclusive but they haven’t restocked or given any word about giving up the exclusivity. I loved her in Mario Galaxy so I’d like to have her Amiibo if it’s possible.

I could have gotten the chibi robo one without his new game but I don’t really know what the deal is with it. I may just pass that one over. If I get really desperate for some reason it looks like the bundle pack will be readily available for quite some time. Has anyone played that? Is it cool? Is there any reason to get it apart from possibly wanting the amiibo?

I totally ignored the yarn Yoshi ones. I don’t really like the Yoshi games, so they’d just be shelf sitters and I have a Smash Yoshi for representation. Kind of like the pixel Mario ones. I’m not that concerned about unlocking the weird mushroom in Mario Maker. If I can get the blue pants version someplace that’s fine. If not, I’m not going to worry about it. I’ve been able to experience the item through other people’s levels.

So far the Animal Crossing Amiibo have been easy to get. The cards I’ve managed to buy off other people who got doubles, so there hasn’t been a lot of wasted cash on my end. People are also being cool about it. No weird pricing. I may forgo packs from this point on and just trade/buy singles until I have a set. I have a little less than half, but have 16 doubles. If I could trade those I’d be well on my way to completing the set.
Here’s my list of duplicates:
DJ KK
Lottie x2
AL
Rasher
Sheldon
Quillson x2
Knox
Nate x2
Pudge
Amelia
Jeremiah
Diana
Walker

I don’t have a list of who I need yet. If you see one you need let me know. We can do a trade. If you just want to buy them it’s a dollar for the regulars and 2 for the shiny ones.

I’m going to try and get some drawings on Ebay in December. If I can’t slide them in while keeping up with the comic I’m just going to forget it though. I could use the surplus but not at the expense of the comic, obviously. I’ve been doing relatively well though and am starting to catch up a bit finally. I think the cold weather has helped. I’m still not exactly sure about what I’m going to do about Xmas, since being at grandma’s house was torture at thanksgiving, but maybe I’ll feel better by then.

As long as I’m thinking about it, Patreon supporters, please check your pledge accounts to make sure they’ll process at the end of the month. I should have the next part of Julius and the Riddle Of Stone up tomorrow. With an y luck I’ll finish the avatar requests for November as well. If not I’ll get them done as soon as I can. Thanks, as always, for going that extra step for me. You’re a big part of why the comic is still running.

Remember when Ed told Brooksie he wears lifts, and Reggie already knew? He’s pretty observant, so he’s probably already figured it out, certainly by the last panel if not sooner. I don’t think he’ll care; it’s none of his business.

Wasn’t his reasoning that he always looked at people’s shoes because it told him whether someone had money or not? He strikes me as considerably more oblivious and/or downright delusional about inter-personal dynamics. But you’re right, I don’t think he’s the kind of person that would care the slightest. For all his flaws and casual dickishness, he’s so far come across as honorable when things get serious.

I guess the only thing I can say is I’m a little “disappointed” with the spelling error.

You don’t like the Yoshi games? I can understand being disappointed by most of them, but not even the first one – Super Mario World 2: Yoshi’s Island? I’m surprised; that’s my favorite platforming game of all time (I’m a big Yoshi fan, plus I love the graphics, music, game mechanics, bosses… everything!).

Oh well; to each his own. If you wind up getting any Yoshi amiibo you don’t want, feel free to send ’em this way! ;-)

At this point, I’d be very cross with Jess. Will this all end in tears? I cannot help but fear = \

Just spent the last couple days reading the comic up to this point. It’s a fuckin’ masterpiece. Good on ya man.

So, isn’t the “kinky stuff” why John wanted to get in on the furries as well? Maybe he and Jess will start a little side group…

If you want Rosalina, try and order her from the uk’s Game. I’ve got her myself and have seen a lot of her over here.

To remind you, you have the blue pants Mario now, iin case someone tries to get it for you for Christmas. :)

Weird, but not in a sexual way

Now, I’m not a furry, then or now, and honestly I think it’s a bit weird, but I was pretty damn sure that was made up. Of course everyone ate it up because people love that kind of gossip.

Congrats on the Lucina.
I managed to get both Ganondorf and Mewtwo for $10 a piece recently.

Still hunting after Shulk, all the pokemon except for pikachu, all the fire emblem, Sonic, the retro pack, the mii triple pack, the kirby characters, a yoshi of my own, Preferable the blue yarn one, Samus, Capt. Falcon, Fox, Falco, Ness, Lucas, Bowser jr., Little mac, the Kid Icarus characters……

Geez, it would just be easier to list the ones I’m not hunting!

You say like a match tossed into gasoline. I think it’s more like jet fuel poured on a trick candle. But maybe it’s just me.

Now now, Jessie. Let’s not over generalise. If memory serves, only about 1/4 of furries are actually into the style for the sex/kink aspect.

The generalization/unfair-type idea, that all furries are into kinky stuff, or similar stuff, reminds me of a [1990s?] survey of European people.

The survey asked random people of each nation- how much sex do you usually have.

One finding was- [speaking generally], that the French DON’T have more sex than the rest of the Europe nations have. Having said that- a lot of French people in the survey, want you to [think] that they do. :)