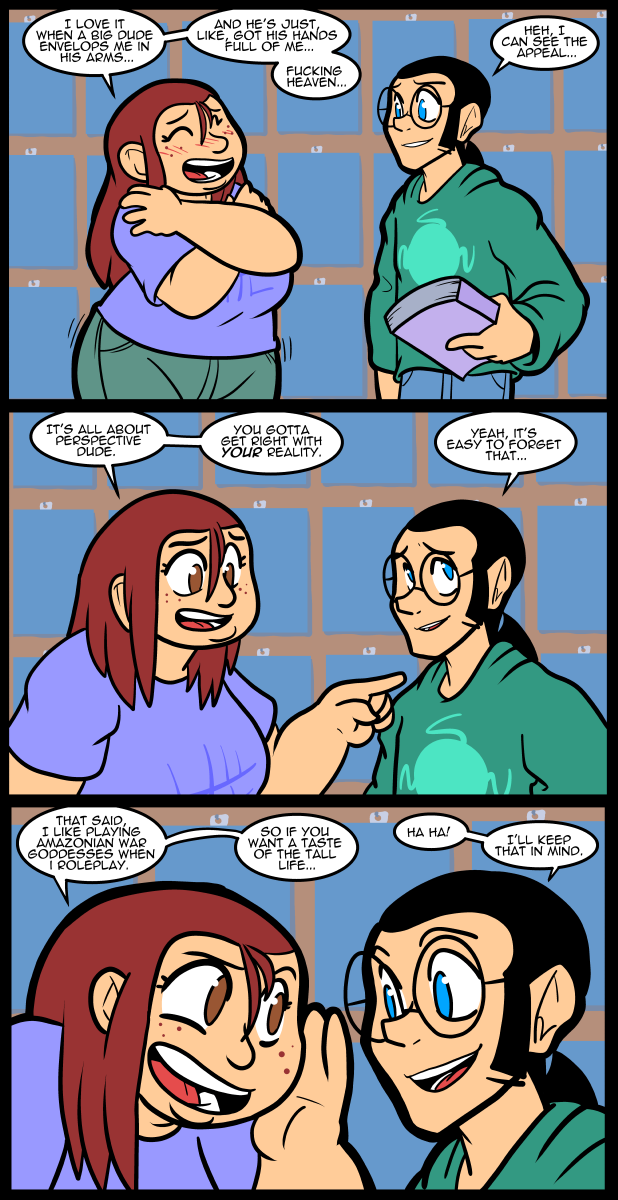 You know, I wrote several blog posts about stuff I wished Lego would do and in the last week or so I’ve found out that they’ve done almost all of the things. Which means they had planned to do them a long time ago, since they plan way in advance of any changes they make. Anyway, it’s nice to know that they are listening to customers even if they take their time responding.

Anyway, I can’t think of anything much to talk about. How about if you feel like talking you go to the discord and see who’s on. it’s been a while since I’ve posted an invite link. It should expire in 24 hours.

Oh yes escapism. That’s why we do all of what we nerds do.

I don’t know…
If you design yourself a polyester, 8 feet by 4 feet envelope…and stuff your romantic partner in it…you now have a new product to sell to- “Frederick’s of Hollywood”. ;)

their, there, they’re now, grammer nazi, your gonna be alright. *lol husky face

Ed seems to have a gift for appealing to the ladies. Carol respects him, Jo is comfortable around him, Nina’s enamored with him, and now Rulette seems to be Jonesing for some Ed.

you have hit upon one of the lesser known attributes to being a shorter male.

Us tall guys tend to be regarded as more intimidating, you will see more tall guys slouch and reduce their stature to be less imposing

also has to do alot with him jsut being a fairly cool dude and personable.. until you piss him off

How tall is Rulette (or Ed)?

I don’t know the exact numbers. Nina is about 6’3″, so you can get an idea based on that. Ed comes about up to her shoulder.

Just from my hobbyist measuring- maybe he’s around 5 feet even?…or add a few inches on to that?

Read this and all I could think was “Back off. He’s Nina’s.” Thanks for yet another OTP.

The title’s a reference to Rick and Morty, isn’t it? :D

I was wondering if anyone would notice.

If the roleplay arc comes, it will be REALLy akward between Rulette and Nina

Not so sure it would be awkward at all.

Goddamnit, Ru is really growing on me. ^_^

I… should have that looked at.