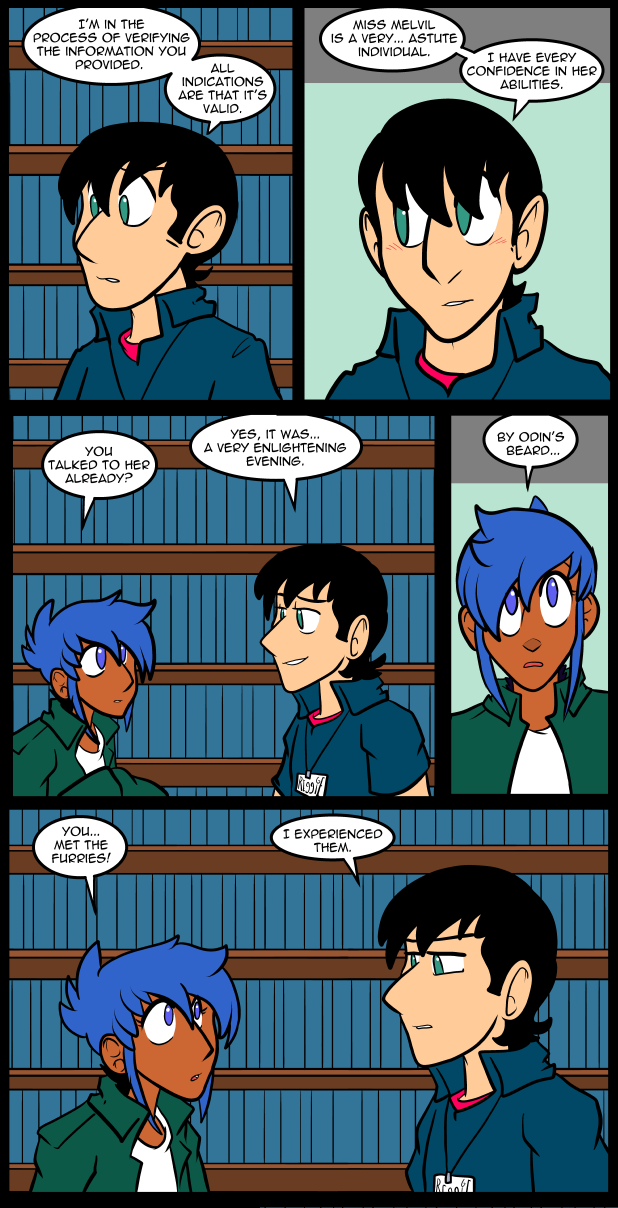 I totally forgot that it was Thursday and not Wednesday today. I hope you had a nice Thanksgiving if that’s a thing you do. Mine was full of casual racism again this year. There was also ham, so win some lose some. I didn’t stay long because even with the heater off the house was too hot. I kept having to go into themco,d every so fen to regulate my temperature. It went bettermthan I expected at least.

I can assure you, my not-particularly-bad-at-the-moment Reggie, that there are worse than furries.

Normal is a statistical anomaly.

that would mean that normal is not normal which is illogical.
what is actually happening is that people are using the word “normal” to describe how they feel people should behave rather than how the majority of people actually behave, which is an incorrect usage.

I think you have the right angle on normality … ;-P

“But First… Are You Experienced? Have You Ever Been Experienced? We – he – elle, I Have… ”
– The Maestro (Jimi)

I hope you are feeling well Jackie

Trust me Reggie there are scaryer things than furrys, hipsters for example

I’ve never been personally warm on the concept of furries.
They are people like anyone else, but even my brother, who is a furry, admits that they go way too far sometimes.

I actually shared a shuttle with a group on the way to a con.
I asked them “What’s the appeal?”
One replied that it’s like most cosplayers, the desire to be someone else for a little while.
Someone that’s close to their ideal. Being an avid Link cosplayer, I can get behind that.

Another one said that she just likes acting crazy and doesn’t feel any pressure because she’s wearing a mask. So she doesn’t feel self conscious since everything she does is attributed to her character. A bit irresponsible but we all want to cut loose sometimes.

The third just said he likes watching reactions of onlookers. I was torn between my love to watch the world burn and my desire to groan in exasperation.

So yeah, Furries are just people.
And people are freaking weird.

Hmm, yeah.
Firstly, I’ll apologize to [the Furries], + anyone that is in other hobbies, for what I’m about to say.

In my opinion, in the USA at least, most people in the furries/furry(?) hobby are OK people, + [from what I gather], aren’t prone to total obnoxiousness in public, or immoral/criminal behavior. [ Meaning- some people see an eccentric club, + wonder if the club is safe to be around].

But, in my view, Furries’ clubs, like people in the [ D + D games clubs, anime shows clubs, LARP boffer sword clubs, Heavy Metal music clubs etc.], unfortunately can have a gossip-run reputation, that can make them, these clubbers, look kind of odd to the general public-type people, people who haven’t tried to talk to these people in these clubs. I think that 97% or better of these clubs, are OK.

Such as- try starting up clubs, mostly for grown-ups, that are: for D + D people, or costume-wearing LARP people, in a town or a college that is known to be very, socially conservative- you might get a few, painful, “What the heck are they doin'” reactions from some localAverage Joes, Joe Public(s), and Jane Publics.

But, if you feel socially safe, + can act sort of subdued in your club, like a local poker group…when you do your furries or whatever kind of club, I can see why the theoretical-you, or he, or she, might get into those types of clubs. Like “The Who” sang: “The kids are alright”.
Dang! Long post. But it’s sort of like explaining to others the appeal of Asterix [tm] comic books- sometimes a short explanation isn’t always possible.

People are strange…
When you’re a stranger…

Can we have Jo wielding Thor’s hammer about to lay the smack like a boss at work? please? pretty please?

She should be wearing it, or some facsimile… .;-)

I grew up with the Internet.
I’ve grown immune to most of what I’ve seen so far, but there’s still some truly terrifying shit out there.

You sure you’re ok man? Those last 2 sentences were kinda off kilter.

never a fun thing to be around, i concur….
it does put a damper on an evening, even worst then political fights.

And it was quite an experience

Ah yes. Casual Racism. I’m just happy most of my older family members prefer French to English. Makes it easier to ignore them.

Hmm, yeah.
My opinions-There is a sort of a problem, in a lot of: Furry clubs, + D + D games clubs, + Anime shows clubs, + costumed LARP clubs, Heavy metal clubs, etc., that can spook the average Joes + Average Janes that aren’t in these clubs.

It’s sort of like introducing Italian calamari [casseroles?] to the people +/or children, who haven’t experienced them. In Furry clubs, + other clubs, It’s a good idea not to act like Jim Carry’s “Mask”, when you or others, are having a lot of fun in public.
[ My apologies to people in such clubs].

When It come to cons, I go all out, in various senses of the word.

I personally, am high energy and able to be friendly in a way I’m able to in home town whenever I go to con.
Not because I have an great form of social anxiety issue. I just don’t like the people of my town.

So when someone says that he or she wants to cut loose and let he world know that he or she is there and read to have fun I’m not about to say that he shouldn’t, but a certain lack of control does not reflect well on anyone.

Its not easy been a weeb in a normie’s world.
No need to make it harder. And it’s not all on the Furries for the way things are. the spotlight just lands on them a lot.

I wonder if he going to defend the furries because he’s going to date one or because his sister is one.

Okay, Jo knows that one. But does she know the actual part(s) of Crom’s body to swear by? Not that she’d ever say it, but it’s a fair deal lower than his teeth, but it’s not his dingus.

I’m a language/culture nerd, that’s how I know.

Oops. I didn’t mean to send 2 different posts about furries, today. I sent one because the 1st wasn’t appearing right away. Doggone internet. *shrugs*