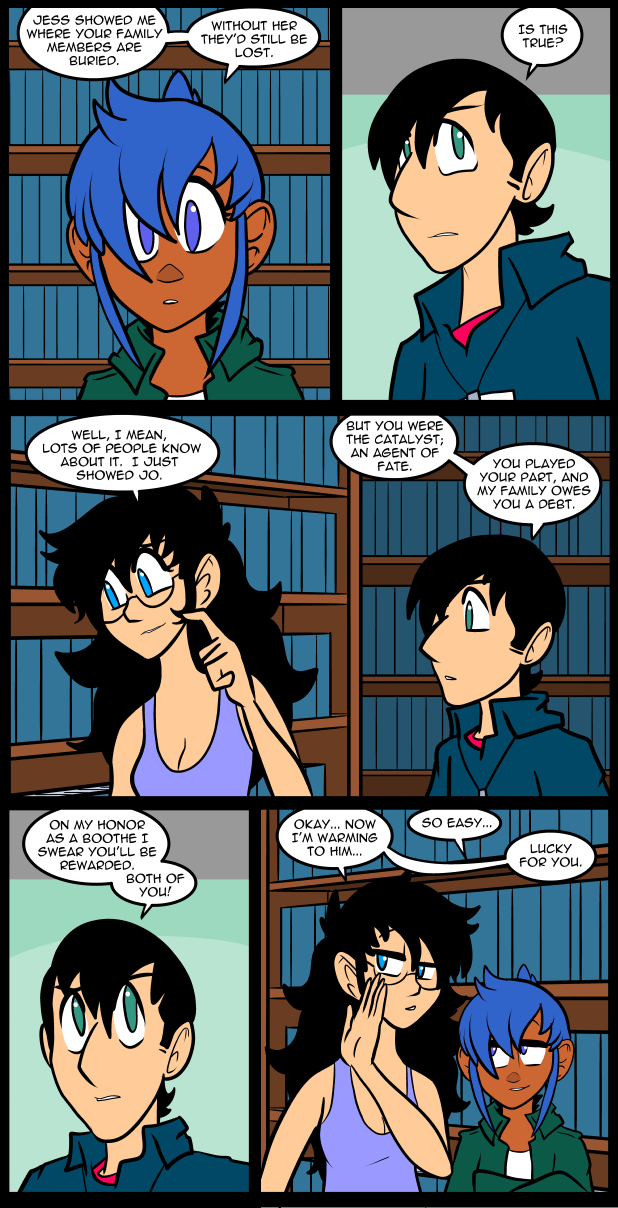 I fell asleep and forgot to post the comic! I’ll write something in just a second. Happy Thanksgiving if you don’t come back to see it.

The other day on twitter I said that a good test for if I won’t get along with someone is if they like the movie Donny Darko. Here’s the thing, I don’t care if you love Donny Darko. The kind of person I’m talking about is one who will flip the fuck out if you say Donny Darko sucks. In my experience, in the days before the internet was a huge thing, people who liked that movie liked it to the point of being crazy zealots. I love ghostbusters. I know people who think Ghostbusters is balls. They’re wrong, but I don’t try to convince them that they are. Somewtimes people don’t like the same things and that’s okay. When you have a fit over someone not liking the same stuff as you it’s similar in structure to hating someone for their religion. Just let it go.

I don’t know why DD is the poster child for this behavior. There are other movies that have similar fans, but they tend to be more reasonable on average. The list includes, but is not limited to: The Crow, Beetlejuice (Including the cartoon), Nightmare Before Xmas, Invader Zim, and most other Tim Burton films. Ultra teen goth angst. That seems to be the through line. The us versus them thinking of a teenager is the problem. In the case of donny darko AND religious extremism.

Bet you didn’t think I could tie those things up so well. XD

I still think they’ll end up being friendly, if not buddies.

This, too, is Reggie. He’s pompous, but he means to do the right thing. I kind of like him (when he isn’t being a jerk).

I’m hoping for the day when he wants to wear the custom name tag that Thomas made for him.

And the foot has left the mouth.

The thing about self-important pricks is that when they do or say something noble, they put their all into it.
…well, no. That’s not entirely accurate. But it is a virtue of Reggie’s.

I’m gonna let you finish, but Invader Zim should have won. :p All the things. Whatever they were. I dunno…. cheez-its? Whatever. But it should have won them.
Peace out.

For serious.
Though I tried to reread JTHM a few years ago and came away with a newfound disrespect and shame for the me of 10 odd years ago that thought that it was the new clarion call for outcast wrirdos.

*weirdos
This page does awful things to my phone.

JTHM? Is that the, [wikipedia’s term], comic book by Jhonen Vasquez?

I think Jhonen Vasquez is also the creator of the TV, cartoon series, Invader Zim.

I’m just trying to see if the “JHTM” that you’ve mentioned, is the J. Vasquez work.

Additionally, there’s a few scenes in Invader Zim that are just grating. One is one where Gir is spinning on the rug screaming for a good two minutes. That with the accompanying music just makes my eye twitch.

There are a few episodes that make me cringe and, reaching it a year or so ago, I was like, “wow. That’s a lot of screaming and nonsense….” The ones toward the end are more dissonant to me like “girl who cried gnome” and the Christmas episode. But, honestly, I watched the first 4 again a month ago and I still enjoy the crap out of it.

A Boothe always pays his debts

Actually, I like it when a person trust himself to do as he says. Reginald Boothe is one of these persons. That´s something almost akin to personal integrity… and there´s no abundance of that in this world. So, good on ya, Reggie. You´re on the way to influx the ladies there :P

P.D. I´m surprised how much we´ve changed our views on Reggie since the beginning of the comic. I´m sure the whole has more “onion-layers” than Shrek has ever count xD

Reggie has always been my favorite character. It’s easy to see why in strips like this. He is the one that has grown most in the series. Honestly I love seeing this character grow.

the more and mroe jess speaks the less and less i like her even if she is Eds twin >.<

I like most of the things you just listed.

I like the crow, Beetlejuice is alright, especially as one of Alec Baldwin’s most unique roles. NBXMas, is fine, but I don’t want to hear about it all year round. Invader Zim is a masterpiece that should have had more seasons, but I don’t base my life around it.

Never saw any Zim. Meh. I did like the Beetlejuice cartoon, but I had to go to the Internet to find anyone else who watched it. Almost completely forgot about it. One of my buddies brought in a JTHM trade to work one day. I didn’t care for it.

I liked Edward Scissorhands, and was surprised at how well I liked TNBC. I was underwhelmed by Corpse Bride. Did I see any others? Eh, maybe. I can’t think of any off the top of my head. Coraline? That was Burton, right? I did kind of like that one.

Oh, right. Zim. As a point of reference, I scarcely saw any Freakazoid. I never even heard of The Tick until years after it went off air, though people I went to school with raved about it. Uh. Animaniacs. I saw an episode once. It was neat. So was Pinky and the Brain.

I barely saw any of the things that people around me loved. Not that I didn’t want to. I did. I just was busy being a Marine at the time and didn’t really have time to watch stuff.

G.I.R. was just adorably insane and stupid, and I cant get enough of Gaz’s nigh-homicidal sibling rivalry.

Thank you for your service. I sincerely mean that.

Coralline was the same animation studio Burton used but he was not involved, which is probably why it’s so much better than his films.

Reggie strikes me as someone who would be great at table top roleplaying games. Or at least getting really into the roleplaying part.

I can definitely see Reggie as the kind of person that narrates each of their turns like a small novel.

Nina would be shipping her party members with each other at every turn.

…Man, now I want there to a be a LARP arc in the comic. It’d be a great way to show off the character interactions in a light-hearted setting. Though I guess the Nerf fight story served the same purpose already.

I missed most of the anime club arc, so I might be missing something key here, but Reggie doesn’t strike me as the type who would be interested in D&D or other tabletop games.

No one said that Jessica Lincoln was NOT unabashedly flirtatious, if not extremely loose in the loins…

Reginald, you poor little man, I sympathize with your scenario. I ,too, have been used like a tool; boy, does that shame feel like lead on your shoulders.

Question! What in all that is unholy is Donny Darko? i’ve never even heard of most of those movies! Albeit i do know of Ghostbusters and Nightmare. Oh the jolly good times.

I finally got around to watching the most recent Nintendo Direct.

This Amiibo thing is frustrating more and more the deeper Nintendo goes with it.

I can’t even afford a Wii U right now. The Amiibo I wanted most is pretty much long gone by now. Let me check real quick.

Okay, it’s not as bad as I thought. Still can’t justify getting one now, though. Ah well.

Well, I suppose the only thing that still bugs me is unique content unlocked by limited run Amiibo. I really only ever wanted the one…

If you want the trainer just get her now. Even if you never get a WiiU you can enjoy it. Nintendo has been trying to make the Amiibo widely available but there have been a lot of problems. If you’re patient you can get almost any one you want. Except Luciana and the Kirby ones…

I think the reasons Donnie Darko has such basically boil down to it pretending to be “Thought provoking” and it “Talking about Fate”, but basically I kind of feel like the guy who directed it is just the sort of person who seems to think that everything has to go in the most depressing and horrible manner possible?

Seriously, fatalistic nihilism+predestination is the only real philosophy spouted by both it and The Box (Which didn’t even have the same point as the short story it was based on). But it “seems” to spout some important truth or something, so certain types of people claim its innately “great” on the basis of itself claiming that it is or something.

“If by my life or death I can protect you, I will.”

Reggie has a weird, archaic way of talking that is strange to me. Are his parents closet larpers? When his sister comes out as a furry, will they reveal their own inclinations, and Reggie will realize his fursona is a dragonkin or something?

Haha, I like your Donny Darko test. It’s a pretty good test though. There is that brand of people who get really bent out of shape over really arbitrary qualifications. And honestly, zealotry of any kind is hard to get along with…

You know, it’s funny, I was about to defend Donnie Darko, but then realized how pointless it would be to do so given the content of your post…

I will say I like the time shenanigans going on in that movie though. It had a unique blend of predestination and split timelines which I haven’t really seen anywhere else. Such a shame they seemed to luck into it, going by the other films the director has done along similar lines.

I think everyone’s warming up to him now…

A Lannister always pays his debts?