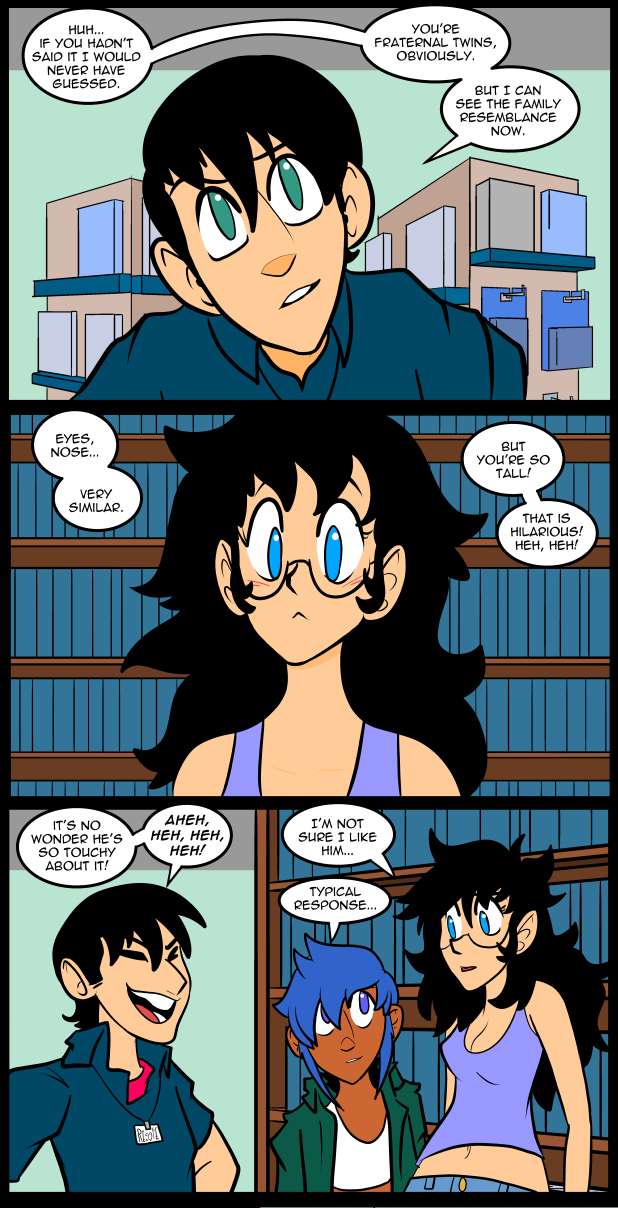 Fun fact: In an early draft of the original scripts Reggie was going to have been dating Jess for a while before Ed ever found out. There was a pretty complete outline of how things would go, but I decided it was too much like a sitcom plot, and maybe too obvious. Then I toyed with the idea of her being infatuated with Carol, which only remains as a an echo in her overall sexuality. Then I put her in a situation with Jo and it was like “Oh, these two are going to fall in love…” which sent ripples all across the rest of the plot. It opened things up in a way that felt right and made sense as far as the overall plan is concerned. I hope you guys enjoy her continuing antics.

Anyway, the teen has called me in for “TV time” so I have to go. Later taters.

Well I am actually pretty glad that got rewritten then. Reggie and Jess would have been a weird pairing with only one way out but Jess and Jo are grade A shipping material. Like this is what packing peanuts wish they could be

“Jess and Jo are grade A shipping material.”

I don’t know.
But they are flammable material…as in…rub them together, and I BET you’ll get a fire.

jess is adorble in panel two ^_^

Reggie’s laugh made me think he was Skeletor for a moment.

I’d ship anyone in that last pannel.

Reggie had better watch out, given how protective Jess is of Ed.

Let’s throw Vicky into the mix and get a full sibling tag-team showdown!

Jess and Jo rolling around on Vicky + Reggie?

Which movie category do I put that in: action ?…or romance?

It’s funny how plot evolves from one point to the next.

Definitely like the way you’ve done the front-on view of Reggie’s and Jess’s noses. I don’t think I’ve ever seen that approach before, but visually it makes a lot of sense.

And if that fan read-through of the comic is still looking for voices, his laugh definitely solidified how I think his voice should sound.

Isn’t it amazing and wonderful when characters you’ve created start having lives of their own, and directing your hands in ways you hadn’t envisioned?

I still ship Brooksie, and John. So I’d be okay with the alt plot shaking things up.

See now, kiddies? That’s how you’re supposed to write! Thank you @Jackie for your insight into how a great writer approaches his craft.

Sometimes when I’m writing, if there are no external distractions (conversation, TV/radio, dogs barking et cetera), I’ll lapse into a sort of a fugue state. When I eventually come up for air, I’ll find I’ve written a passage of the story for which I have no recollection or prior plot. In a science fantasy novel, two characters stepped away from the main scene for a conversation that saved me a ton of explanatory writing later. In a screenplay, two other characters had an exchange that set the tone for the whole movie:

Edwin: You might have told me you’ve been dead for the past twenty years!
Michael: Well, it never came up in conversation, did it? “Oh, speaking of engineering drawings, Edwin, I’m dead.”

Probably not a mind-blowing thought, but: after seeing Reggie in action, + seeing that he’s obviously [very smart, + well educated], It’s really surprising, sometimes, to see how clueless he can be, in social situations.

One of the ditziest people I know is quite book smart, so it’s not too surprising.

Optional answer for Jessie:
No, we are identical twins. But when I opted for the sex change I also asked for longer bones to get rid of the short jokes by all these @$$holes at work.

One of the ditziest people I know is quite book smart, so it’s not too surprising.

That’s OK. Your [intentionally humorous?] response to it is very funny! :D

Reggie has really grown on me throughout the years. I used to hate his guts.