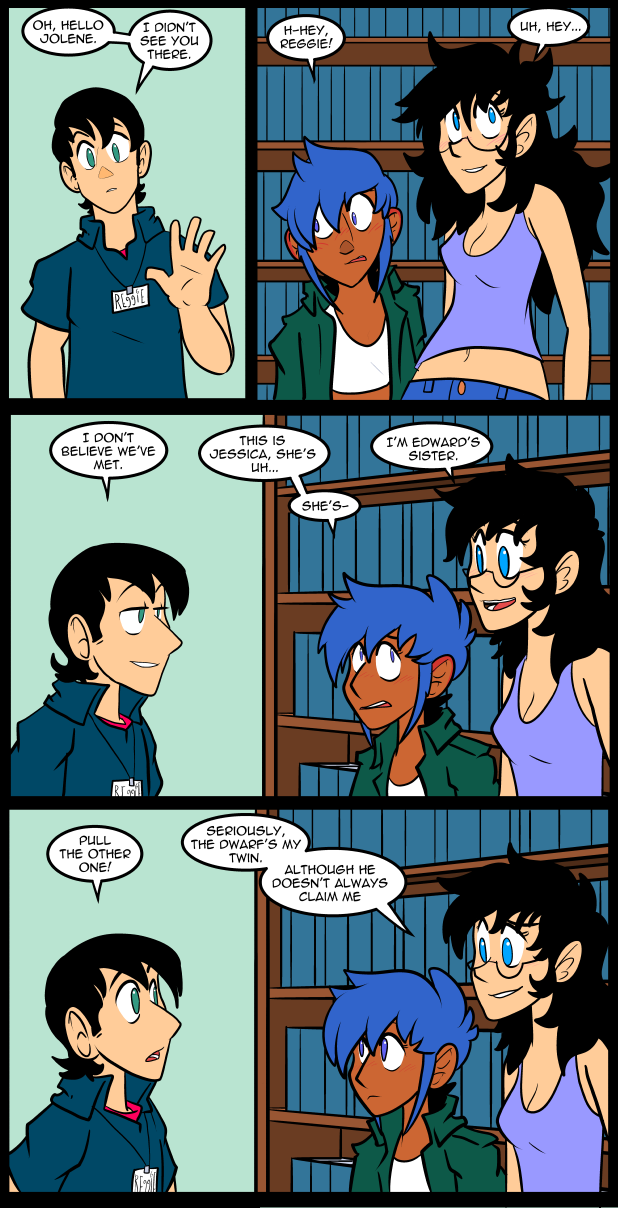 Reggie is less surprised than Jess just was, but still surprised. That counts for something, right?

My Reflet Amiibo showed up. Late, because of the snow, but better late than never and all that. I had to wait a long while before I could test him out. His powers in Codename Steam are fantastic. He has an extremely long range fireball that can break some structures. From a high point he becomes a very effective sniper. There’s no knockback to it though, so if you need an enemy moved you have to either kill it or find another way. Two shots kills most enemies. In addition to that he has a Levin sword that stuns enemies… apparently. I’ve never used it because the fireball is so useful. He also makes the whole team’s critical attacks more effective. He is the best Fire Emblem character so far, although Ike and Marth are both extremely useful.

Dangit. I have a nosebleed. I’ll have to cut this short. This might be the first nosebleed I’ve ever had. I have no memory of ever having one before. How fun.

Okay, that wasn’t too messy. It seems to have sorted itself out. This area is just so dry all the time. Hopefully that won’t be a regular thing.

And Jolene is going to be jealous?

Hmm. That would be an interesting development. If Jo hasn’t been home recently, she may not know Reggie already has a curvy woman on the string — her roommate, Alex.

Somewhere a Japanese Manga/Anime artist reads your work, and develops a series of a guy who’s the brother/sister of someone in charge of a harem love web. And the comedy that ensues whether it’s the guy getting the one girl, or the sibling trying to deal with his or her suitors. And somehow both siblings get entangled in this.

Also, I really need to stop drinking a hot caffeine beverage before bed.

I love how red Jolene turns in these situations

Its going to become permanent if she’s not careful.

I’ve been having trouble collecting Amiibos lately.
I have a couple of rare ones but I’m just so unwilling to buy scalped Amiibos.
It’s too painful.

Nosebleeds. They suck. Mine last forever and they happen randomly throughout the year for me.
More frequently during the spring.
So I feel your pain.

If you have twitter there are lots of accounts that post when prices drop and preorders are posted. Makes it much easier.

Just search #amiibo, or type anything with that hashtag really, and some will probably follow you. They all basically steal info from one another so it doesn’t matter who you follow for the most part.

I have only had 2 nosebleeds in my life. Both times I had a sinus infection. :x

Really? You’ve never been kicked in the face?
…That reads a lot weirder than it sounded in my head. My surprise at your not having been bonked to a nosebleed by so much as a carelessly moved box stands, though.

I think there’s been some interesting development of Reggie lately. He’s changed moreso after Mike’s comment about the store not failing with him there.

I like this. He’s come a long way from when we first met him.

Ugh, nosebleeds… I totally understand ya. Never had one in my life, but this year, right after I hit 39, I’ve started to get them, seemingly at random. Thought it was the allergy meds I was taking (generic Zyrtec) that started it, but I’ve not taken any in months and I still get the occasionall bleed.

Doctors and nurses all tell me to use a saline nose mist, keeps everything from getting too dry in there. Seems to help, when I remember to use it regularly. Might want to give it a try if it happens to ya again. Cheaper than medical alternatives, I’ll say that.

On the nosebleed subject, part of the cause is usually a higher sensitivity to low humidity. The saline nasal rinse is a good solution if you have to go outside a lot.

The less labor intensive solution for home is humidification. Once the local temperatures drop below freezing the humidity in a heated building drops to the single digits which is bad for sensitive sinuses and most electronic devices, also a lot of static cling and frizzy hair.

You could invest in a commercial humidifier but those things can go from a walmart special for 30 bucks to stupid expensive units that are not much better. Fortunately for those with a little google-fu and hands on McGyverism there are simple do-it-yourself solutions. My solution back in college was a bucket, chopsticks, blotter paper and a fan.
These days there are loads of inexpensive methods and they are mostly found here http://www.instructables.com/ – have fun reading some of the insane projects.

Well, Jess seemed to recover quickly. Jo, not so much — she’s still a little Rare in Panel 2 (although she’s on her way to Medium by Panel 3). Reggie seems unruffled — perhaps he suspects nothing.

“Pull the other one”…? I get from context that Reggie is saying “I don’t beleive it” or “Get out of town” but I’ve never heard that before, or read it before. Is it a Kansas thing?

“Pullin my leg” is a common phrase, I would assumd that this is a cultural permutation of such phrasing like how some places say pop, soda, bubbly, soft drink, or just “coke”

It’s a shortening of a longer phrase: https://en.wiktionary.org/wiki/pull_the_other_one,_it's_got_bells_on

The implication is that the one saying it isn’t asking whether the other person is joking, and it’s more of an “yeah, right” statement.

The only time I can think of where the phrase is used in a movie is Monty Python and The Holy Grail. I believe its when Arthur is explain to some peasants that he’s the king.

Quite true. Here’s a link to a clip featuring the line on YouTube: https://www.youtube.com/watch?v=H4_9kDO3q0w

Another example is that, um, long sandwich usually (but not always) made on Italian bread. Growing up in Eastern Connecticut, we always called them Grinders, although my Dad, hailing from Akron, Ohio, called them Subs. They’re also known as Baguettes (after the French bread), Heroes, Hoagies, Submarines or Wedges. Slight variations of contents and style abound, but the idea is the same. And oh, yeah, in some places they just call them ‘big sandwiches’. Philistines.

at the very least, torpedoes and subs are so named because they were kept in otherwise empty torpedo tubes in submarines. for lunch. unless they were launched, of course. ;P

I’ve only heard occasionally in 28 of 30 years, but typical “It has bells” is the rest of it.

I think it’s an import from the UK, as I’ve heard it much more frequently in English entertainment.

Man I wish I could be so lucky as to not remember the last time I had a nosebleed. I got my nose broke when I was younger (no I don’t mean I tapped it and it started bleeding i’m talking in a fight cartilage snapped type stuff) so every once in a while the little booger likes to remind me it was broken (and might still be off set) by randomly bleeding again.

I’m surprised that it has taken this long for Reggie and Jessie to have met.