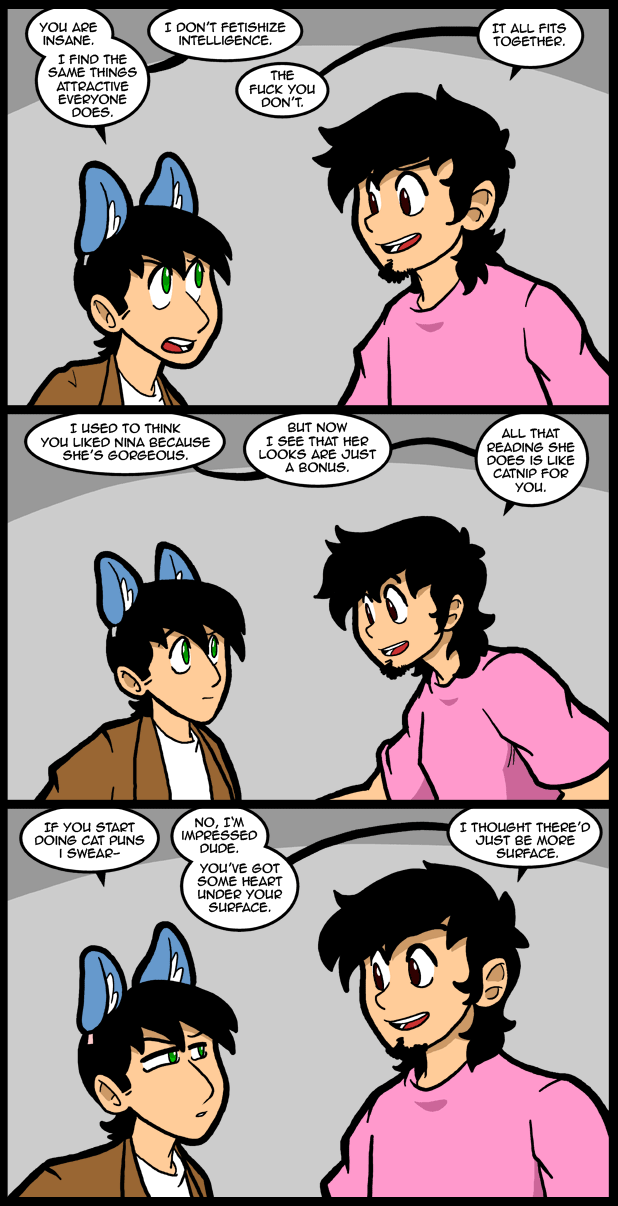 I’ve always been hesitant to try selling drawings on eBay because I feel like no one wants them, but I’m going to give it a try. I drew Alex the other day and here’s the listing.

I’ll get a better picture and info soon. I just wanted to get the listing up tonight. It’s like all the other stuff I send to people as gifts. 22 inches tall or so on a comic page. I probably should have drawn someone else first, but they kept looking crappy, and this one looks okay. Anyway give it a look if you want. I’ll sign it if you want me to.

I’ll do more if this proves to be worth my time. I’ll draw suggested stuff for auction if you have any ideas.

I wrote one version of this scene that ended up in a fight because their dialogue kept leading them their. It took a few tries to get these two to interact nicely. I didn’t want this to end up that way. Since this sets up a whole other section of comic I didn’t want these two at odds. Reggie’s defensive attitude made it hard to work them toward a friendly outcome. The final outcome was really good, I think, and makes reference to a key moment for Reggie.

Tomodachi Life was on sale in the eshop, so I got it and put all my characters in as islanders. Strangely enough, John and Reggie became friends as soon as john moved in. Weird huh? It’s hard to actually get the miis to ask like they “should” since the system is vague. Mostly they all ended up being free spirits. It’s like a hippie commune. I need to tweak the personalities maybe. XD

So John thinks Nina would be purr-fect for Reggie?

Do not start the cat puns. We don’t need cat puns.

Don’t listen to this insane person!

Furrson is also an acceptable term.

You’ve cat to be kitten me.

You gato cat-on with the times man! Pun it up!

These puns need to come in a kit. Ten is usually enough.

This set of puns is turning into a CATastrophe!

‘Kneeds’ cat puns! Cause of the claws… and the pummelling… when cats do that thing where… hello? Is this thing on?

I get it! So the mic must be working.

Hey everyone, don’t let this tail off.

@model S: Don’t be petty, for some of us this is pretty much our only chance to get stroked …

I don’t mean to let it tail off…but I have to take a break for a moment, and read a book of some author’s catachism.

Huh, I didn’t realize you were a Cat-o-lick …

Could y’all paws for a bit?

NO! Bring all puns to me! To meeeeee!

“Cat-o-lick”…arggg! I concede. For this page, I don’t want to compete with the high level, + the beauty, of that pun! :D

No need to get catty about this.

…But I still have lots of puns left, in the kitty.

I gotta admit I like all the attention and actual development Stooge #1(AKA: Reggie) has been getting lately. He is very quickly becoming a real person with actual hopes and dreams beyond managing a store in an unfortunately dying area.

Hopefully we’ll get the same for Stooge #2.

He can try to direct the jokes to Reggie, but we all know that John is one cool cat.

As for the eBay art: as of 11:00 EDT, there’s already one bid, with 6 1/2 days to go. There are several webcomics artists who hawk their wares on eBay, Faux Pas, for one; Margaret and Robert Carspecken were selling their (usually) fox-or-cat related work can be purchased there. They have since set up a storefront on their own site, mostly for prints.

…really? Nobody else noticed but me? Bah, curse my grammar nazi ways…

3rd paragraph after you link to the drawing of Alex. End of the first sentence. Its ‘there’ not ‘their’.

Actually, I’m trying to cut down…

…on the GrammarNazi thing, that is.

…because I obviously can’t spell.

Reading the undercomic blog makes me want to see a lower quality “mini-comic” that goes behind the scenes of the “filming” where Producer-Director-Writer Jackie is working with the improvising headstrong “actors”.

“Again with the fighting?”

“Sorry boss but this is just what I feel my character would do in this situation. I know you want it to stay friendly but none of the lines you’ve started us on sound like ‘truth” to me.”

*sigh* “Look, we aren’t leaving this room until we work this out. Take five while I order some pizza.”

“Oh, please ANYTHING but pizza! I just had that scene that took 27 takes to get right. 26 takes of me eating a piece of pizza and then you go with the one where I’m just waving it around!”

You could call it something like, “Between Pages” or whatever you refer to individual updates as.

Wait, are our comments failures? Has this been the joke all along?

I think it is becoming increasingly difficult to tell “failure” apart from everyday normal life in the U.S. anyway.

“I find the same things attractive that everyone does.”

One of the funniest things here is the fact that he thinks everyone finds the same things attractive.

He doesn’t seem to have many layers

He’s definitely not an onion.

Is he kind of a prune?

I don’t really do the comment thing often, but I really enjoy your work, and have put in a bid (currently winning) to say thank you for keeping me entertained over in Scotland. Your efforts are greatly appreciated!

I appreciate it. If you win I think that will be the furthest any of my actual art has travelled, physically speaking.

FYI, there is a term for it: Reggie is a sapiosexual – someone who is aroused by (or just attracted to) intelligence. Sapiosexuals do tend to follow similar divisions as everyone else when it comes to gender preferences but they are a bit more likely to find themselves attracted to people on a personal level even when not sexually attracted, just because the intelligence draws them in. To me, I find this to be evidence that there’s hope for our species yet. :D

You totally need to open a store. Also, a Kickstarter (or whatever) to release book(s) of your comics would be cool.

There’s a link in the header for the one book and… well, that’s all I sell actually.

And here I was expecting Shrek references and shouts of “layers”.