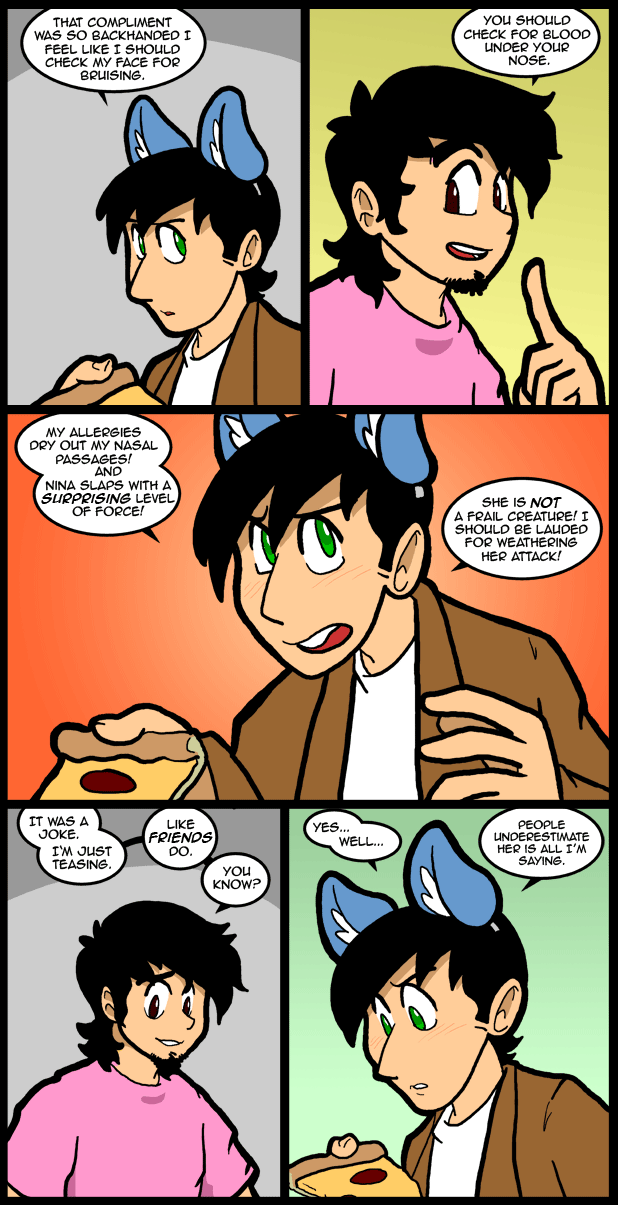 At long last, I got enough visits in Animal Crossing: New Leaf to upgrade my train station. I went with modern to match my town hall. I still don’t have all the construction options, but the station was a big one that’s impossible to get without a friend to help. It’s a small victory, but a victory none the less.

I think that this is the last page of the comic to be made with Photoshop. My relationship with that program has been turbulent at best. In the beginning all I had was PS Elements 3 or something. Every step of the way was hampered by lack of functions and a very tiny drawing space. I had the smallest Wacom mouse tablet thing they make. One of the ones where you draw on the top of the desk while looking at the screen. There was always a disconnect between hand an eye that made it difficult. Fortunately, the drivers worked with Windows and PS, so at least I wasn’t constantly fighting that.

After that I was given a copy of Photoshop CS1, which was a significant upgrade and allowed me to do several tasks much faster than before. It was lucky because I had gone to color and even trying to do 3 pages a week was difficult. The comic had been 5 days a week prior to the introduction of color. I’ve never managed to work fast enough to make up that time. I’m not very good with color and have trouble seeing subtle difference in it, which is why my work is so saturated. It makes everything clearer to my eyes.

Eventually Adobe gave out free versions of Photoshop CS2, which worked remarkably well for a few years, but then something happened. Around the time they instituted the “pay forever” scheme the drivers for my Wacom stopped working with CS2. Some of you will remember this. I had to go back to 1 because, for whatever reason, it was unaffected. I have been hobbling along since then. Several of the upgrades that 2 made available to me had become staples of my process and losing them was a real blow. Essentially Adobe forced me to reevaluate what I was using to produce content. Honestly, I’m no great loss to their bottom line. I only ever paid for two versions of Photoshop elements, the others were given to me by other people. That said, I’m just on the cusp of being able to afford their software, with a payment plan at least, but I feel like they don’t really want business from people like me. Which is fine. if your business model is disregarding the independent artist that’s your right. We are never going to be the money making group that large companies are.

At this moment Smith Micro seems to be serious about providing reasonably priced software in the hands of creators, so I went with Manga Studio EX5, after having tried EX4. Neither of which set me back significantly in the pocketbook. I got both on sale and was pleased in both cases with my purchase. You guys have responded positively to MS5 so that’s my go to from here on. It handles massive files so quickly and without errors that it’s allowed me to do more side art for readers, faster, than ever before. I can do two or three Patreon images in an evening and still have time to do a significant amount of work on a comic page. Hopefully my positive feeling about how things are going won’t result in massive backlash from the universe.

This is useful stuff to know. My Wacom has not been doing well with CS2 either. I have another photoshop on my computer in the other room so the wacom stuff should work fine with it but I’m getting annoyed with shit not working with other stuff anymore. :/ Blargh. I hate what companies are doing.

I’d wager that’s a “no”. The exacr reason(s) as to why are up for debate, but I doubt his family encourages it.

People need to understand the sheer mightiness of Nina’s pimp-hand!

…how can they not?!! Nina’s practically a notary’s seal away from being a Valkyrie!!!

All she needs us the Viking helmet.

Is she a Valkerie, Or an Amazon warrior?, Or one of the Norse norns? Hm.

Not an amazon. They cut off a breast, the one on the side that would get in the way when shooting a bow & arrow.

*snrk!* I wonder how many people read that myth of the lands of the Amazons, + decided to seek their fortunes in other places? :D

That makes sense when you look at amazon.com’s prices. They cut them off when it gets in the way of Amazon prime.

Well, I did a horribly sad job of reading the comments before I wrote anything.

One might say you weren’t much of an observer.

Yeah, I’ll go back to my corner now.

I still use that free-but-not-really-legal version of CS2, but I also use Paint Shop Pro 7 for pixel art editing and Gimp for other simple to moderate image tasks. Since my artistic skills amount to stick figures, I don’t need artsy stuff like Manga Studio. But a lot of my artist friends swear by it.

I think Reggie is thinking: [ I actually have FRIENDS at work? Hot damn! who knew? ]

Maybe he’s thinking of other things, too.

“Do I really like pepperoni, or should I have taken the sausage and mushroom?”

In this scene, Reggie is suddenly transfixed by the hidden beauties that are found in a pizza, and a voice in his mind says: “Behold. The power of cheese!”
Hee, hee!

Perhaps he’s internally monologuing about the first person who thought to smash up some tomatoes, put it on a piece of bread with cheese, and bake it.

Ah! So Reggie is both a smart-woman lover, AND a historian!

The hand that Nina uses to hold books when she is reading is also her pimp hand. Pray she never combines the two activities! Reggie knows…

So I just spent the last week or so catching up through the archives after stumbling across your comic, and I just wanted to let you know how impressed I am with it. Personally it’s always been the writing more than the art that has attracted me to the various webcomics I frequent, and your writing is phenomenal. (The art is perfectly fine as well; I don’t think you should be as down on yourself about it as you are. Your characters’ facial expressions alone have set me to giggling at nearly every page.)

I very much enjoy the depth all of your characters have, and slowly learning more about them and watching them grow. I can very much identify with several of them as well, from Nina’s love of books to Brooksie’s shyness to Thomas’ whole deal with exes. The whole arc with Dawn/Constance actually helped me come to better terms with a semi-recent breakup of my own and sort out my feelings, so you get super extra bonus thanks for that.

Anyway, TL;DR: You do quality work, and I can’t wait to see where it goes from here.

Here, here! I agree, especially on the getting down on yourself for your art which is pretty excellent.

God, Reggie’s bad at this.

Your final sentence, tbh, is exactly what I was thinking as I read the paragraph above it. “Why on EARTH is he tempting the Gods by saying that shit!”

I won’t lie or sugar-coat this: Adobe sucks. I have to use their products at work (the Business world doesn’t know there are any PDF handlers other than Acrobat), but I do a lot of photography, and for many years, PhotoShop Elements was my editor of choice. But as I acquired new cameras, Elements would not recognize them and refuse to do anything but the most elementary manipulation in JPG files. It would not read RAW files from cameras that were in its database, even though Canon’s cameras all meet the same standards.

I called Adobe Customer Support several times, and when I asked about getting a loyalty discount on an upgrade, I was told “We don’t do that anymore.” I read that as, “You can afford a new camera, you can afford a whole new version of Elements.”

When I needed help getting something to work correctly in Adobe Reader, I was told there was nothing wrong with it, it worked the way they intended, and I was just one of a handful of troublemaking (ab)users who demanded something different and special just for me, me, me!

Am I going to spend my money on any more Adobe products? Nope, I’m selfish and I’m I’m keeping my cash for me, me, me!

Well, i do photo as well and because adobe decided to be a dick when i got a new dslr(nikon) i either needed to convert the images to dng or upgrade to CS6 to be able see the raw’s i imported, i don’t wanna dng shit and i didn’t want to throw out a bunch of cash so the only option for me was get it from back channels so i could actually do my work, i mean seriously, stop being a dick and force people to upgrade just because they got a new model they want to use…..

Yep, that’s how I ended up with PaintShop Pro X6. It doesn’t care which Canon the files come from.

But… but… I ship Nina and Ed… And now, not only do I find myself liking Reggie, but I’m almost pulling for him with Nina. Crave, I love hating how well you do your characters and the way the hit the feels. You, sir, are a true artist and even when things don’t go the way I want them to in the story, you make them happen in a way that I love anyway. It is never boring and never leaves me truly disappointed. Thank you for doing what you do and sharing it with us.

Wait… when did John find out about Nina pimpslapping Reggie? I thought only Thomas and Carol knew about that.

I think it’s safe to assume that the entire store knows at this point and have simply chosen not to make a federal case out of things.

I applaud their maturity. I’d never let him hear the end of it.

I have the memory of a squirrel sometimes – I’m either nuts or just loose them. =P

Took some archive fumbling before I found the relevant page and the whole story arc surrounding the event. – wow I had forgotten what a healthy girl she really is.
/comics1/399-thats-gonna-leave-a-mark

I know this is a weird thing to ask but if you have anything planned for Carol soon can you have her say fail? That used to be her catchphrase but she hasn’t said it in a long time.

Everyone underestimates her once

I assume this is unlikely and very probably out of character, but is Reggie ever going to say something like, “John, please don’t tease me like that.”?

Don’t dish it out if you can’t take some yourself.

Be warned, with Smith Micro if you don’t purchase the download forever plan you cannot redownload any of their programs past whatever cut off they choose. The smart thing is to save the download file to media somewhere off computer. If your computer HD crashes and both your working copy and the download file are lost you are SOL.

I usually buy a copy on disc if I can. Ex 5 is a hard copy. Thanks for the tip though.

Glad to hear MS5 is working out for you, I was really hoping you would like it.