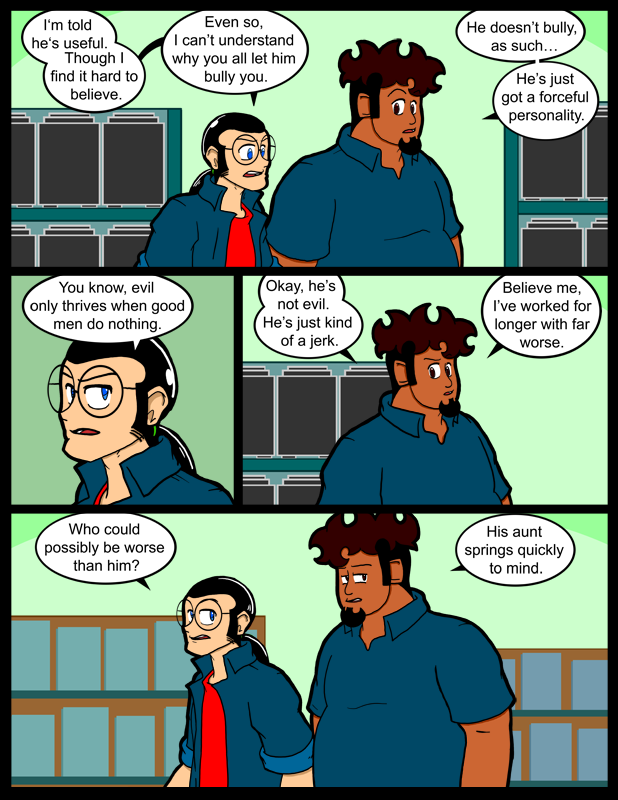 You may notice, over the next few days, that the site is a little off…  The comicpress thing has been updated, so a lot of stuff is fucked up.  I’m happy there’s a site at all, at one point there wasn’t.  The damage done will be repaired as quickly as my team of gnomes can learn the intricacies of CSS and black magic, as it seems those are the two things that power word & comicpress

The computer did the shutdown thing again last night.  I didn’t have any applications running, and I had just opened up IE to look at Twitter.  It was fairly cold in the room and as far as I can tell the fan was functioning.  The last time it happened I was trying to check my mail.  Maybe IE is the through line here.  More science will be required…

Figured I’d tell you guys since so many of you know stuff.  You can track my progress through the magic of the internet.

The spellcheck doesn’t think that internet is a real word.  It seems like internet would be a priority word or the spellcheck going into a program made for the internet.  I can’t add it to the dictionary like in Works.  My copy of Works has tons of new words in it that are accepted by the public at large, and some that I’ve made up myself.  words like:

Barcasm – Which is trying to be witty when you’re too drunk and end up being annoying.

Hobodor – The smell of a hobo.

Stereoskeptic – When two or more skeptics get into a recursive loop of agreeing with themselves in a smug manner.

Suckulent – Something that sucks a lot.

Ducklingling – A cross between a duck and a panda.

Aggravention – To prevent aggravation, especially in MMORPGs.  Aggrovention is an alternate spelling.

Transfandango – The complex interaction between Transformers fans in forums.

These new words have varying levels of usefulness, but I’ve coined them none the less, and encourage you to shoehorn them into any conversations you may have in future.

actually i think that i will start using aggrovention because ‘crowd control’ just never seemed quite right.

Grammar asshole here, but “internet” isn’t the “correct” way of spelling it. It’s “Internet”, You’re suppose to capitalize the “i” as The Internet is apparently a proper place or some such nonsense. Try it, put Internet into the spell check if internet fails. (Note – Firefox/wordpress, whichever is spell checking here, recognizes the non-capitalized version but my Twitter app only recognize the capitalized version. Too lazy to open my word processor in the name of literary science.)

Yeah, “Internet” is a proper noun, like “Richard” or “Pringles.” Or “Canada.”

Also, I want a pet ducklingling.

The internet is not a physical place, a person or a brand.
Treating it as a proper noun is just bizarre.

Just gnomes and black arts? Why does mine require a virgin sacrifice on every Red Moon? INTERNET. Hmm, no problem with spellchecker, it thinks it’s a word. Oh well.

BTW, as I would love to bother you by emailing you that thing I sent you (oh, and I do have at least five more pictures, roughly sketched up at work), IIIIIIIT’S FINALS WEEK at school, so I’ll bother you next week ;) (one is at least probably 10x more…xxx than that first one I did:)

I do like the black background for this site tho, I cannot recall where but black is supposedly supposed to help with energy costs or something for LCD’s. There’s even an alternative google site (ha spell check on Google) that’s completely black.

I don’t know if y’all (what? no spell check for y’all?) know these but I use them when appropriate:

Nipply: when it’s cold enough to poke an eye out
Shitnuts: more of an expletive when taken by surprise, so surprised you shit your own nuts

and on to the real question.

Hell yes I blame IE. IE is the most screwed up, event-riddled, open-doored bit of programming I have ever run across. It is absolutely the first software I delete on any machine. I have no idea why people allow such crap to remain on their systems.

After IE, Outlook gets the boot.

As for internet/Internet… grammatically, it’s considered a specific *place*. Much as Seattle or Miami are. Personally, I agree – that’s stupid. ARPAnet, and the like, yeah, you can (should) capitalize them. The internet is a generic collection of any number of owned networks and nodes.

Still what can you expect from something invented by Al Gore?

I am going to work these words into conversation, no matter how contrived the situation may be!

Lolz, Suckulent sounds awfully similar to Succulent… which is kind’a what a cactus is.

Awesome word though. Making up words is a mega win.

Regarding your technical issue, Windows has this annoying ‘feature’ which occasionally automatically reboots your computer if you encounter a major software failure more commonly known as the Blue Screen of Death. Nevermind the fact that, if you don’t see the error screen, you have no idea what kind of error is coming up and thus aren’t able to research it. To temporarily turn this ‘feature’ off, restart your computer and, as it’s booting up, keep tapping F8 until you eventually get to a Windows boot menu. Select the “Disable automatic restart on system failure” option, and Windows will boot up normally. Then, next time you encounter the conditions that would prompt one of your mysterious ‘reboots’, it instead will stop at the Blue Screen of Death, to which you can record the error code and message and then be able to research it through Google or the like.

Feel free to e-mail me if you encounter any further issues and I’ll see what I can do to help. Consider it fair exchange for providing such an enjoyable comic.

@ Zorpheus – Many thanks, I’ll have to try that at some point and see what I can learn.

On the note about search engine spellcheckers not having their own name in them, Bing, which is by Microsoft, fails to recognize itself as a word.

DocWaffle: Funny how the guys who write the code for these didn’t think that would be an issue.

Reggie is the Diet Coke of Evil.
Just one calorie, Not evil enough. :)

Yeah, he’s not really evil, as we have come to see.
But back here in the nethers of time, it really seemed like he was Evil-Tryhard boy.