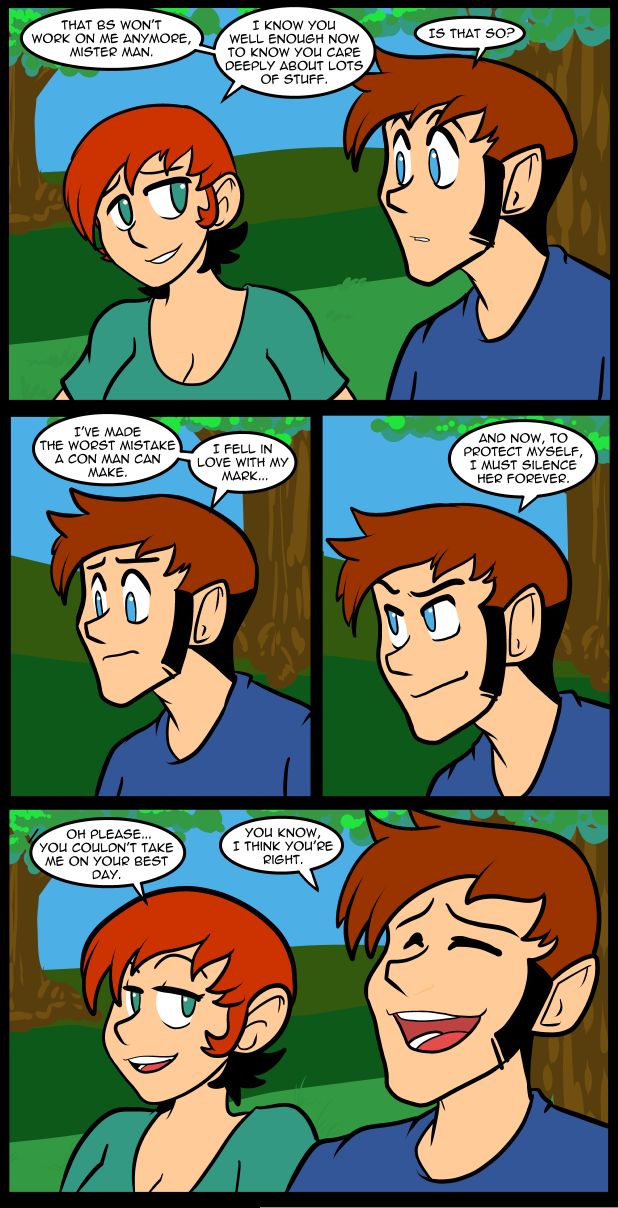 Thomas is not tough. Unlike many men, however, he accepts his cowardice, his weakness, and is better able to deal with the world on his own terms. It’s good to test your limits, but it’s also important to recognize where the flags are. a major contrast between these two is that Carol feels confidence the way someone who truly is confident does, while Thomas apes it expertly while never knowing what confidence really is. Not in most situations. He’s like a rogue with a high bluff stat. Most people can’t tell the difference between fake bravado and the real thing. The fact that Thomas understands that is another contrast in he and Carol.

I don’t have anything p[articularly interesting to rep[ort from my regular life, just com,plaints you’ve heard before, so I’ll spare you. I may have to report for jury duty soon. No idea how that’s going to work with my foot. I may need to do some sort of medical absence thing. I’m sure there is one. If they can acoomidate my foot it’s no big deal. Guess I’ll just have to see.

One tries, I’m glad you appreciate it.

I agree completely. The characters feel real, not like characters. That’s something that a lot of writers (even comic writers) struggle with.

I think you might have a keyboard issue as your ¿blog? has a few extra characters.

For the jury duty thing, I belive you can get out of it if you have a doctors note and check the box on the jury duty summons for health reasons. I know a friend of mine got out of his because of issues with traveling in cities.

That might be an encoding issue on your computer. If your PC is set to a different language setting than the website, it might render punctuation weirdly.

I doubt it. “rep[ort” is not a punctuation issue. Me thinks it is phone keyboard issue coupled with the wonky spell check function that may or may not work as promised. Heck my browser does the same thing at times.

But he can try.

He missed a perfect opportunity to invite her to a dinner date. I am dissapoint

I was expecting a smooch during which she couldn’t talk.

I also would have accepted this

I like it that Thomas has come-to-terms with his own cowardice + weakness(s).

Just my own thing- I believe that an odd part of the U.S.A’s culture, (of which I am from) wants the theoretical-you to fight [everybody] who challenges you to an insult fight, or a physical fight.

And also, this cultural idea also wants you fight and WIN against every man, woman, boy, or etc.. who might challenge you to a physical fight.
To me, that’s just macho-stupidness to the limit. I don’t want to live like that.

Anyway, I truly believe- you are not a coward, or weak, if you don’t want to physically fight everyone who ever challenges you to a physical fight.
That went in an odd direction. Hm. Thus endeth the lesson.

It’s probably mentioned in the strip somewhere — I really don’t have the luxury of a 10-year, < 1500 episode archive crawl just now — but I suspect Thomas is an only child. He certainly acts like one. If he is, kudos to Jackie for capturing that attitude so well; especially since we know Jacki has at least one sibling.

He has a sister, but I don’t remember where he says it.

By the power of Google:
/comics1/894-practice-makes-perfect

When they question you for jury duty, tell them you’re a big believer in jury nullification, but that that shouldn’t be a problem for any honest person, but that you understand that there will be lawyers present. If they put you on the jury anyway, it was meant to be.

My sister told me a trick to stay off of jury duty. I don’t know if it works. She said to wear a bow tie.
She said a lot of lawyers think that people who wear bow ties are eccentrics, and therefore- are oddball people.
So, the theory goes: lawyers want average people, + not eccentric people, on their juries, so wear a bow tie when you’re interviewed for possible jury duty, and maybe the court won’t pick you for jury duty.

You know… a nice dark, evil, murder story could go right here very well… maybe as a side comic perhaps?

I could help with script.

I don’t know why… But I noticed in this particular strip of the comic, I find that Thomas looks a lot like Lupin III. Just with red hair instead of all black, but face-structure… I don’t know why, but I felt I must share these thoughts. That makes me also think that Carol is his Fujiko, which she’s got the breasts for at least, and that is just very amusing to me.

Eh don’t worry about jury duty, man. It’s part of the whole citizenship duties process, they pay you (a little) for it, and you’re ultimately contributing to society. There’s worse things than jury duty.

Yeah, like ending up in the hospital because you look fine but are still recovering from a sickness…

Exactly. Or you’re the reason jury duty needs to be called for in the first place. See? Lots of things worse!

There’s only one way to truly silence her, Thomas, and that’s with the application of your lips to hers. Get to work.