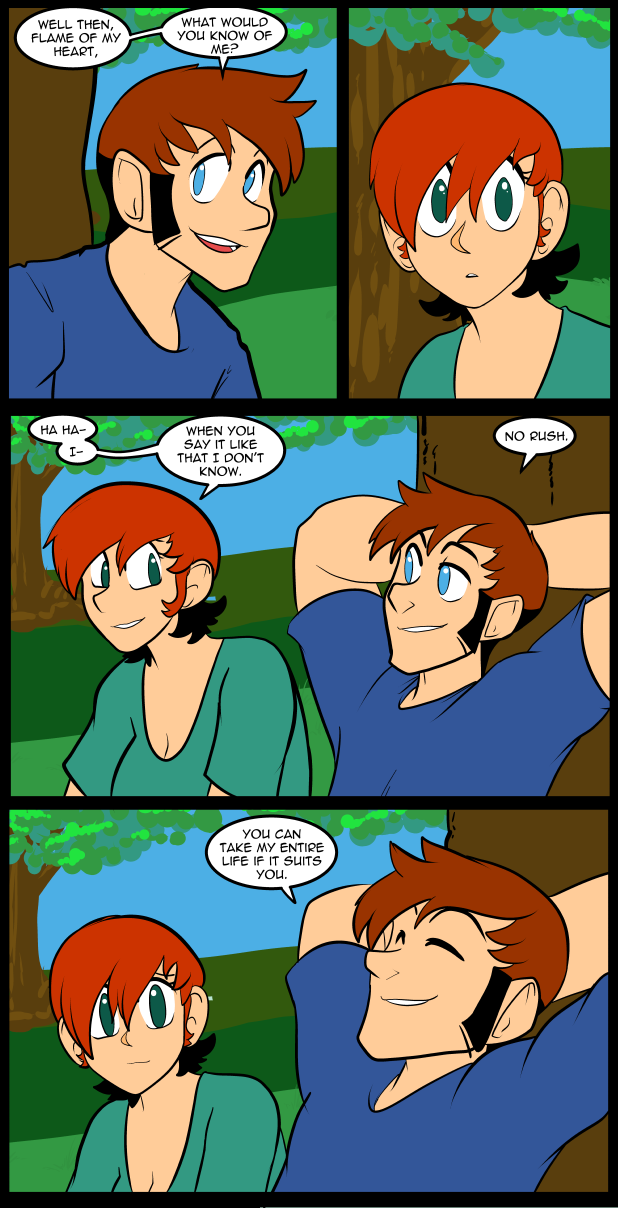 This line was so romantic to me I came this close to upending all the stuff I have planned just so Thomas could suddenly propose to Carol. It wouldn’t be completely out of character for him to suddenly decide something like that, but I talked myself out of it because overall its not the right way to do things. It would have been fun though. Still, I want their relationship to evolve over time. One of the reasons that the first arc is the day they got together is because I wanted the rest of the story to be everything after the happy ending. Movies and stuff tend to end with the start of the relationship and we have to fill in the blanks ourselves. Or shows like Moonlighting fall apart once the will they won’t they aspect is spent. I wanted a story that started with they did and built from there. Of course the story is the story of all of the cast, but as far as these two go it’s can I tell the story of the love that comes after the passion and make it compelling.
Apparently I can on some level. Not a level that equates to great success, but better than most.

Every creator expresses their obsessions through their work. I have always been obsessed with romance of the kind I write about, which is probably why I never experience it. Or rather experienced it only once. I sometimes think I wouldn’t be able write about love if I was actually happily in love. The want of it make me capable of seeing it in that unrealistic way that makes love worth reading about. Although in reality I’m probably just too miserable a piece of shit to be worthy of love and everything else is happenstance.

A lot of people have tried to get me to admit that Carol is my Galatea. I don’t know why its so important to them, but its true in as much as all the female characters have characteristics I like, even Evrina. Carol isn’t Galatea, the comic is. Of course if my kiss suddenly made it real I don’t know what I would do. Or why I was kissing it in the first place.

the eyes of everyone have been getting gradually larger, but Carol’s in the last panel had me snorting at how they seem to have frighteningly consumed her face, ’90s shoujo style. It looks almost like a third-party newgrounds parody of the cleanly drawn renditions in the header. ah well, styles change

Or maybe it’s just because Crave is tired and ill and don’t have enough time to spend on the comic ?

It’s because Jackie’s been using Anime Studio to produce the comic. I think it just does that.

Replying to the original comment after reading both of the other replies; I submit that it may be simply that Carol is caught so off-guard that she’s kindof doe-eyed. That is usually represented in a comic by drawing the eyes larger. Thomas is making her very happy by saying the absolute perfect things in this moment.

Ok while it makes sense not to propose so quickly, after that set up, I wouldn’t be able to say no xD the mood is perfect

I think your writing is very strong. You have made interesting characters and they interact in believable ways; and as a result I am invested in them. I am happy to see Thomas and Carol being happy together.

Also, while I enjoy reading your comments below the comics, I think your comics stand on their own without needing the extra commentary.

And finally I really do like your art. So IMHO your comic has it all: characters, plot, dialog, art, everything humming along and sweeping me along with it.

I wish you every happiness in your personal life. I think at this point you could write the love story even if you were in love… just keep on doing it the way you have been.

Look into your heart. You will find.

Oh, trust me, the mind and heart can hide some volatile things when left unchecked. Or when you’ve fallen into the perverse charnel pit that the U.S. has cultivated for the shallow population.

You are worthy of love, amigo. Please don’t view yourself as a piece of shit. There’s plenty of people in the world that would do that for you.

Going off of this, Jackie, I struggle with self deprecation all the time. My therapist has me fighting what is now an uphill battle because after so long of getting shit on in life, love, and other things you start to internalize your failures, and become convinced that the thing that’s actually wrong is you, yourself. I’m still fighting my way through this stuff, but I can leave behind one trick I was taught by my therapist: write a letter to yourself, and list all the qualities about yourself that you like or admire. Don’t put down anything negative. I still haven’t gotten around to doing it myself, because every time I sit down to do it I get stumped (I’m in a VERY deep hole, you see), but it may help. Just something to think about.

Keep up the good work, friend. I’m in the mental health field and I feel your “uphill struggle”. One day at a time, as they say.

1.Taste in comics. There, you’re started.

came down to the comments section to second this.

If we find people who love us, it is mostly random. It is wonderful, but… just luck. It sounds like you have been unlucky, and that’s unpleasant and it sucks. But it doesn’t mean you’re a piece of shit.

I say this as a currently-unlucky not-shit person. You’re not a piece of shit.

I miss having someone to share these simple moments with.
Being single has it’s perks, but I much prefer being in a relationship and comics like this make me want to keep trying.

“A lot of people have tried to get me to admit that Carol is my Galatea.”

Now I can’t help but imagine Carol dressed as Power Girl. She does have the haircut for it… among other *ahem* attributes…

It’s kind of weird how people project some of their own fascinations on to you. I mean, this is a world inhabited by people that exists inside your head (unless you take into account theories of a “multiverse”, which then, one could assume, means that only creative geniuses can peer into alternate realities. That makes it sound so much more awesome).

In saying that, the only person you have to really sell the story to is you. We can tell if you are happy with the progression or actions therein, and we as your audience will see it in your work (and your blog/rant/talky-feature-thingie if you should happen to post something).

Hey, I love the story of the characters, but, imho, I think Carol and Thomas are a bit rushed. For a confident guy, Thomas is too deeply involved and they don’t know each other enough to think of a life long relationship. It would be up to Carol to balance things, slowing down him, what can make hard to enjoy the view while slowing down the train.

I’m married for 7 years by now, and I can say that when a couple begins, they can’t make hasty assumptions, or it will create huge expectations, and it is a hard burden. Woman can easily see when a guy is just bluffing, and it will compromise the just started relationship.

Also, when first dating my husband, he wanted to move in with me after a month! Of course I had to put on the brakes to slow him down when talking about moving in, kids names and the sort. Nonetheless, I wouldn’t say their relationship is moving too fast or that it’s unrealistic

You are right, it is not unrealistic, it does happen. I’m just saying in case the author thinks it is the normal thing.

Is he really oblivious? Or is he simply just taking back control of the conversation?

Dammit, Thomas. You keep saying the pull-at-the-heartstrings-stuff, you’re gonna make her cry.
Geez. Keep it up, and you’ll make ALL of us cry! ;D

I wonder how many readers had to Google Galatea (if they even cared). I’ve been a mythology nut since I was in the single digits (my brother had a copy of the d’Aulaire’s Book of Greek Myths way back when). In High School, we read Shaw’s play for English Literature. It’s sort of in my blood.

Chalk one tally up for me.

Mmm, y’okay; what’d I miss? Or are you one of the “A lot of people” in the last paragraph?

Oh, I’m one of the ones in your last paragraph that had to look it up.

If you ever get a malware warning try to tell me as soon as possible. Every so often one slips in to the rotation and I don’t come to the main site enough to randomly catch it. If you can get a screengrab and mail it to me at betweenfailures(at)hotmail(dot)com it will help me when I notify the service.

Love the anime eyes in the last panel.

I have fond memories of ‘Moonlighting’. Well, of the first 2.5 seasons. The miscarriage episode was admitted to the Shark Jumping Hall of Fame before the credits finished.

Dang, Thomas is just so romantic at times. I wish I could inspire that kind of speechless reaction in my wife half as often.

That…actually neatly sums up one of the reasons I love this comic that I’ve had trouble putting into words. It starts where most stories end, at least with these two. We get to see the relationship, and without any needless sitcom/romcom drama stupid crap, jealousy issues, contrived misunderstandings, etc. We get to see them being *happy*. Not enough stories do that.

Stories like this need to exist. Where the couple just gets to be happy.

Which makes it all the more frustrating when some part of you really wants it to happen and it constantly doesn’t. If there is a trick, it’s just not caring about it anymore. Not apathy (which is TRYING to not care) but honestly finding something else that’s worthwhile and realizing that love is, simply put, just an aspect of life that is already full of a lot of other things that are worthwhile.

Not to plug another comic out there, but if you have a chance I’d check out Octopus Pie. That (like your work) has a pretty accurate view of love and relationships.

The show Castle was particularly interesting, because it was one of the few shows where after all the sexual tension, the main characters get married, and they still have a show. They seem to have decided that that couldn’t possibly work (even though it was) and they have Beckett going off alone to keep heat off Castle. Still, pretty unusual.