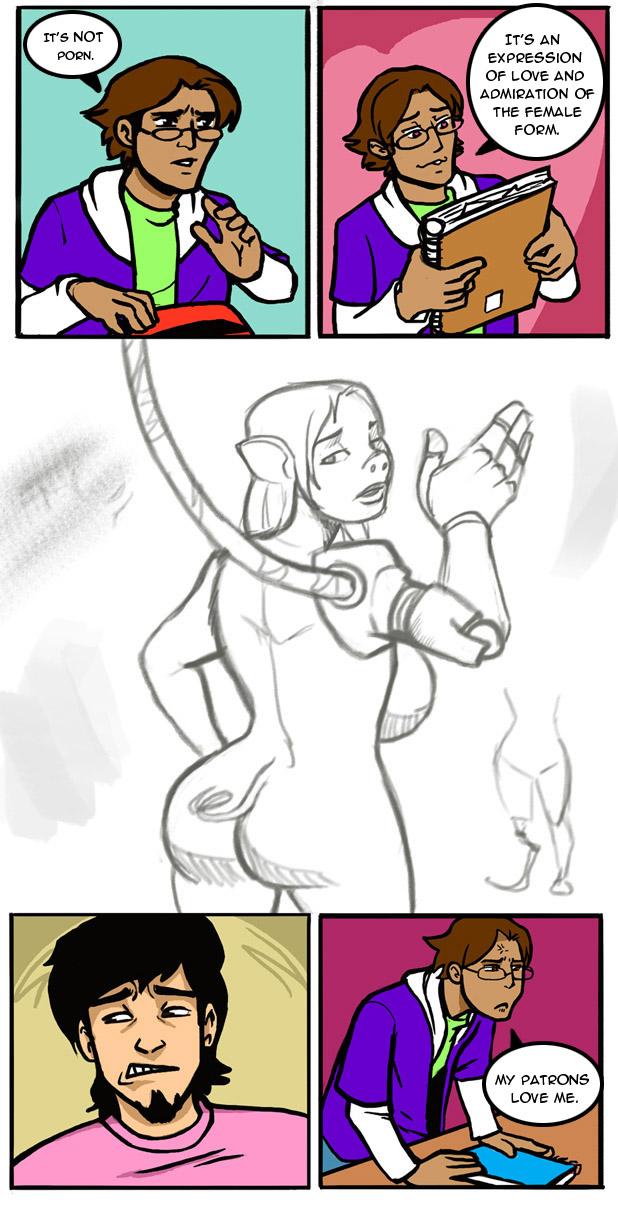 Those of you who pay attention to the artist, as well as the comic, will know that I went to the hospital recently. If you aren’t one of those people you may be curious as to what’s going on here. Well, as I said, I went to the hospital for an infection, although the reason I got stuck there was that they thought it might be a blood clot. Long story short I spent 3 days there and have been unable to work properly since then. To that end some of my friends have come forward to make sure that there is still content to be enjoyed on the days you are accustomed to having it here.

This first one is by my (now former) friend KB of Olympic Dames she also does many arts on Tumblr and can be hired… For the right price. I could almost make this an official page. If I’d been in a position to think things through a little better I might have. As the story moves along I’ll be keeping this page in mind to see if it will fit in someplace naturally. Then I’ll give it an official number. If not, well it’s all good, I suppose. Regardless, KB is exceptionally skilled and, should you need some art, her prices are reasonable. Perhaps even a little low. I’m always trying to con her out of fanart, but she’s too smart for me.

As promised I will now relate my “ghost” girl story. It happened the night I got home from the hospital. When we got in it was still the afternoon and I tried to get a nap, but I kept vomiting into my mouth a little and choking on it, so I decided to just get up and try to do something. Eventually the Teen came home and kept me busy with stuff until it was very late. This amounts to about 4 days of me not sleeping properly, or for long enough, and it was clearly having a negative effect. I could hear the sounds of the hospital in the silence of my room, in addition to voices from what I can only assume is my own subconscious. If that’s true then my subconscious doesn’t like me very much and has some very unpleasant things to say to me. I wasn’t able to sleep because of all of this and I slowly began to enter a state where my subconscious was overlaying itself on reality. As I peered into the darkness a glowing shape began to form. It was transparent and blue. The outline wasn’t clear, it was fuzzy like electrical static, but it was clearly becoming the shape of a woman. I’m guessing 25 or so, with a build like Brooksie. It just stood there, in front of my television for a few moments. There was no clear face, but I assume it was observing me. At least in so far as a hallucination observes anything. In my head I wasn’t really sure what I was seeing, or why I was seeing it, but I wasn’t afraid. It was just a thing that was happening. I didn’t have much of a response to any of this until if began advancing on my position. It didn’t do it menacingly. It just walked casually across the five foot distance between us and began to climb in to bed. I felt a foot press into the mattress. It was light and the figure easily flipped herself over and behind me without disturbing anything. I could feel the presence laying behind me though, but I still wasn’t afraid. In fact, I sort of woke up at that point and all the other brain noise quieted down. Now, in total silence, awake in my dark room, I could still feel this thing laying behind me. Then I felt hands placed gently on each of my shoulders and a clear, female, voice said. “Hello, J.T.” But it wasn’t in my head, it was behind my left ear, as clearly as if a real person was there, speaking. That made me jump out of bed in a panic. After that the voice happened in my head a few times. Not all at once, but randomly, along with other voices. voices that were not nearly as pleasant, but they all said things along the lines of welcome back… After that I was wide awake and played Hyrule Warriors until I passed out on the floor. When I woke up I was fine again. The sounds and voices from the hospital and otherwise were no longer haunting me. I suspect the whole thing was a result of trauma and sleep deprivation, but it’s as close to seeing a ghost as I expect I will ever get.

Neat! I’m with you on the probable cause and all but as you say, it is “close” and as far as having the experience goes maybe not all that different from the “real thing”. Sounds like a more surreal and interesting experience than I’ve ever had. On the other hand cruel hallucinations is kind of a bummer.

… okay, I’m glad I read that ghost story in the daylight. Dayum. O_O

When I get really tired, sometimes I hear voices. A couple of times, working late at my first job, I’d hear people’s voices so clearly I’d look around to see who was there – even knowing I was probably alone in the cubicle farm. Sometimes it would be voices I’d recognize, sometimes not, but I could never make out words.

So I guess this is just a thing that happens to tired brains.

I’ve only ever seen something from tiredness once, and it was just a flitting gray shape – obviously a hallucination.

I also got so tired once that I literally fell asleep on my feet. I was in the bathroom about to brush my teeth. Then I woke up, still on my feet. I had a kinesthetic memory of stumbling around a bit trying to keep my balance, and another kinesthetic memory of trying to put something in my mouth that was too big. Then I looked, and found that I was holding … my hairbrush … with toothpaste on it.

Take care of yourself and get well as soon as possible! We love your work… so be sustainable! (And maybe make the Teen take care of you, instead of the other way around!)

He’s not helping his case.

Rough but hey you get a good story out of it! Well hope you feeling top notch soon.

I hope you’re well soon :) Thanks for all the comics!

That looks like the Soul Eater “ugh Excalibur” face

Panel 2’s expression might as well be saying “my precioussssss”

But wow, that ghost girl story. Closest I come to anything like that was the time I spent entirely too long convincing myself that the small bookcase in the corner of my brother’s guest bedroom was not the creepy girl from “the ring”, which we had seen the night before, so it was safe to go to the bathroom.

In my defense, I’m super nearsighted and I had just woken up in the middle of the night because I had to pee, so some disorientation could be forgiven. On the other hand, seriously, past-self….it was just a movie. (Though my ex fell asleep watching “the ring” and woke up to static on the tv screen, lol, so I think I prefer my experience overall.)

Waking up to static on the TV, after seeing The Ring? Good Gravy! That sounds as bad as seeing Freddy Krueger in one of your dreams. Man.

I’m glad you are feeling better and thanks for sharing, take things easy and make sure you totally recover ^.^

Well this comic traumatized me.

If that’s enough to traumatize you then I’d stay away from Fur Affinity and DeviantART if I were you. Or at least make sure you have them set to not show mature content.

The not so pleasant things said about you sound like automated thoughts. http://m.youtube.com/?#/watch?v=m2zRA5zCA6M

Sorry Crave, that was no ghost,
It was a sleep-deprivation hallucination.
Unless…
Did You take any psychotropics whilst at hospital?

I hope you get well soon.
I didn’t need my sleep tonight, anyway @_@

I think KB did a bang-up job on this episode! When I was reading today’s comic, I could tell that something was… different… but didn’t realize this was the start of the guest strips. The continuity is perfect; it’s as good as canon.

The takeaway on your ghost story is ‘Dawn, go away, I’m no good for you’?

Y’okay not quite. ‘She’ was no good for me, certainly!

For lack of better words: [Great googly moogly. What a ghost-type story!]

Glad that you are feeling better, Jackie! : )

Hoping you get well soon.

Fun post though if this were canon its funny how fast John soured considering this is what he worked so aggressively to be a part of.

When I was younger I heard something, twice. First time when I was about five I walked down the corridor of my house and stopped (you know like when you walk into a room and forget why you’re there?). I heard my name called. It sounded adult and distant so it wasn’t my sister who’s door I was stood near. I assumed it was my mum who was outside mowing the front garden. I went out and asked her what she wanted and she had no idea what I was talking about.

The same thing happened about two years later, and I mean the same exact thing. Mum was out in the front garden, sis was in her room and I’d stopped in the corridor at the same point.I think the time of day was about the same. I heard the voice calling for me again. The only difference was that I was older, remembered the previous occurrence and decided that if it was my mum (it wasn’t) that she could come get me if she needed me. I went straight into my room, even though I’m not sure I was headed there in the first place. It hasn’t happened since.

When they say your name its probably not a good thing. Or at least it’s worrying.

Isn’t the blond’s fursona a pig? So… he’s basically drawing not-porn of her… makes me wonder if there isn’t something else going on..

My deeply-locked weeaboo might be speaking here, but, dat excalibur face. (I liked Soul Eater waaaay more than I should have.)

I gagged on my little Caesar’s when i saw that face. Anybody seen the holy sword arouund here?
I practically CHOKED on my ‘Za, Brah.

Every time I read back through these, I forget KB did this excellent page and am like “huh….this looks like Olympic Dames”

It’s a shame we had a falling out. I should probably delete this.