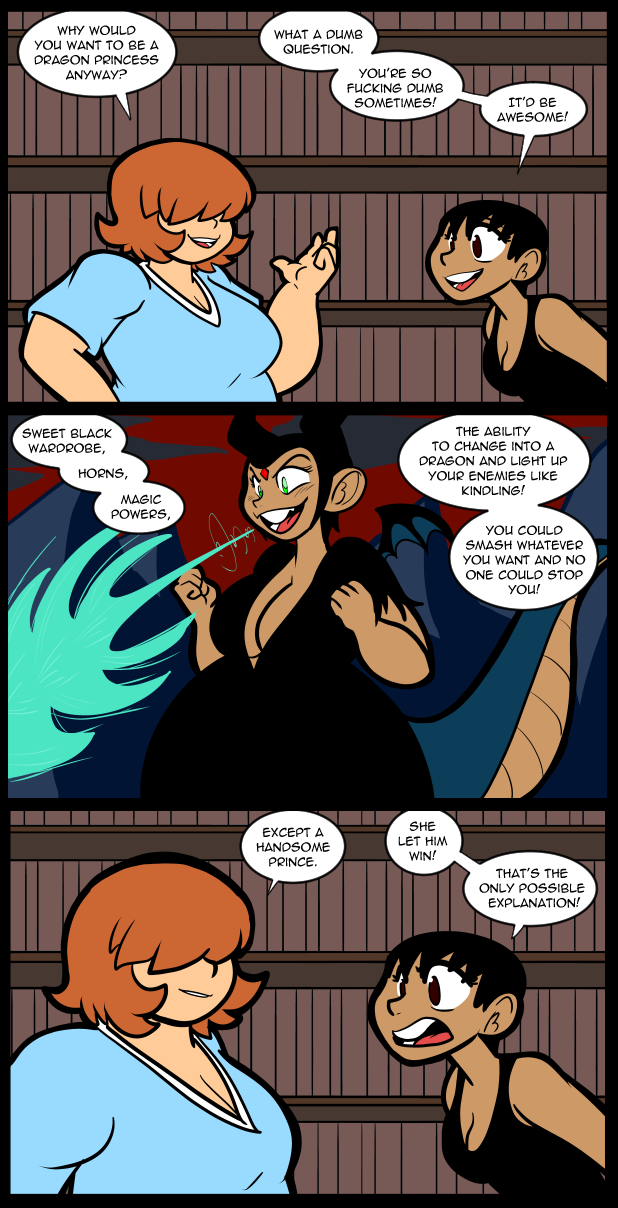 Since this page was so late I went to the trouble of drawing new art. My internal clock is so fucked right now that it’s the middle of the night so no one is doing anything I need to stop. I debated about how “internet” to go with Evrina’s vision of herself as a half dragon princess. I landed on making it pretty tame. Partially because I’m not sure what the audience here would tolerate and partially because I lack the skill to actually make the image as violent as Evrina would see it in her head. Anyway, it was fun to draw her cutting loose. She’s a lot of fun since she’s such a goblin about everything. I really want her and Carol to become friends at some point so they can be the most terrible duo of all time.

Anyway, I’m gonna go… I don’t know. Do something. Everything is so screwed up, but now I can’t sleep. I’ll do something. Anyway, links to support my work are above, as always. Later taters.

Evrina as the snaga to Carol’s uruk certainly sounds like an entertainingly awful dynamic.

When I read “tame” for your take on Evrina-as-dragon I don’t know that I was thinking “violence” as the limiting factor.

Seriously that second panel could launch a lot of fan art.

I must agree, but I personally find the prospect of a royal half-dragon slick with the gore of her vanquished goes far more enticing than conventional waifu bait.

Please theres more than enough monster waifus on the internet. We dont need one more

Blasphemy! And moreoever, a blasphemy unbecoming of the Goblin King Jareth.

You remind me of the babe

The Monster Girl Encyclopedia keeps growing (both canon and fanon), so clearly you are mistaken. <3

Wait, I’ve yet to hear of Kinktober. I’ll have to do some discreet searching.

People never sign up for Patreon for stuff like that. Even if you make it they just pirate it. They only subscribe because they don’t want the story to end.

Kinktober eh? That means I’ll assume the missionary position with my sweet wife and make a baby (takes about a month with some luck). Mmmm and thanks sweetheart for the coffee and cookie.

Intel wins the battle before the first blow is struck.

Evrina would rock the wardrobe as is, she doesn’t need the horns, the tail, or the magic. And she breathes fire every time she says something sarcastic. All of which says something disturbing about her desire to lay waste to her surroundings. Not surprising, but still disturbing.

Maleficient only lost because she played hard to get. Evrina would have told the prince he would be a king, and get that dragussy.