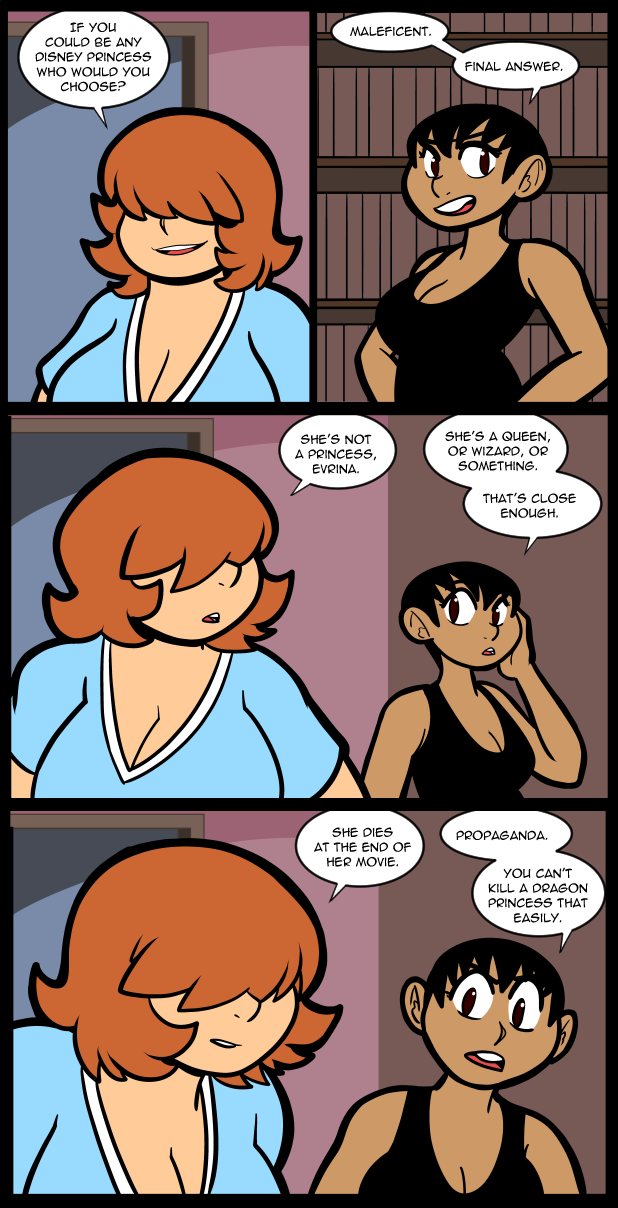 I legitimately could have gone on with just movie puns for years, but I decided to have mercy on those of you who don’t like them. I won’t promise that they’ll never come back though. Ridiculously labored puns are a joy to me.

This has never come up in the comic, but the mouse fursona that Evrina is sometimes depicted as is not the one she came up with for herself. Alex, Evrina, Maddison, & Bridgette all have fursonas that Alex came up with for her own use in making her little self insert stories. Evrina actually has one that is more like how real fursonas work in that it doesn’t really have anything in common with her real self apart from the fact that it’s an even more unrestrained version of her internal self. This is kind of obliquely referencing that in that she likes monstrous, unrestrained, people and things. Ironically Alex and Evrina’s fursonas have more in common than they realize but they’ve always hidden aspects of them from each other. Anyway, someday I might actually get to tell these deep lore stories in the proper continuity. That remains to be seen.

It also remains to be seen if we all survive this economy, am I right? If you’re doing well for yourself maybe you can share with me by supporting my work. Links above. If not maybe you can use the comic voting link to raise my rank on… The site whose name I am currently unable to remember. I have apparently reached the impaired memory function level of sleep deprivation…

Anyway, It’s almost time for grandpa’s pills so I best see to that. Catch you guys on Tuesday night for the next upload.

I try to vote daily for you on Top Web Comics (best I can do for you in my unfortunate financial situation I’m afraid), I really hope it helps. Keep up the good work Jackie.

I know you are (it really shows), and you have my highest respect and admiration for it, especially under the current circumstances! I wish you all the best.

I think Maleficent is a Fairy, no? Kind of like the three fairies from the Disney movie, but bigger and evil.

She only went evil because all the other fairies got personal invites to the princess’s introduction, so she felt insulted and you never insult a fairy

That was just her excuse in the cartoon she wasn’t invited BECAUSE she caused trouble or harm to anyone she laid eyes on. Would you want the cruelest bully from your school days at your baby shower? Especially when it’s known they hadn’t changed at all after growing up? Same idea…

Between these two I wouldn’t be surprised if we get into the pre-Disney source material. Alex likes her accuracy and Evrina likes her stories without the edges sanded off.

Evrina, as I recall, didn’t exactly have a lot of restraint to her character to begin with. Suggesting there could be less seems like a long shot.

Did neither of them see the amazing movie Maleficent (2014)?
I mean, granted, you could argue it’s not the same “continuity” as the original 1954 Sleeping Beauty, but it was also a way better story, worth remembering.

It definitely isn’t the same continuity. In the live-action movie, Maleficent was portrayed as a tragic villain which goes against what she actually is. In the original storybook and Disney cartoon she is a straight-up evil sorceress with no past attachments that made her as such. Maleficent was born evil, does evil things. She ‘is’ evil. What Disney did to try and make her more sympathetic goes against the original source material.

Saw it. Thought it was terrible. They take up Maleficent as the anti-hero of the movie, by taking down the three nice women who raised her in the cartoon.

They said woman empowerment, but it degraded three women to empower the one. :p

Who is the ultimate Disney princess. I feel like this is a question that could start a fan War

I am a Patreon subscriber, and I do vote. I’d like to request a new voting incentive please.

I can’t get into the account to change it again. The last time I tried they never answered my email.

The official Princess list as per Disney (Not that I agree):
https://princess.disney.com/

Ye only evil princess is technically Namaari (from Raya) unless you count The Descendants as canon.

Personally, I’m still on Xenomorph Princess being best, given the acquisition of Fox and the Alien franchise.

What about Princess Leia? She’s now a Disney princess too

And a corpse! The total package!

Kida of Atlantis also seems to be missing from the list, which is a disappointment.
She’s badass, and one of my favorites.

As long as you’re spelling it out, it always seemed likely to me that you designed your characters by working backward from furry concepts, though I haven’t seen any of the auxiliary material. But I’ve been puzzling over this: Is Nina a bunny? Or a horsie?

Given how tall she is, maybe a Giraffe?

Only the characters that were introduced in the furry arc started as anthro characters. Anything you see in any of the others is on you.

The look at all of their lives outside of the main plotline, is really nice to see. I love getting to see what makes each of the characters uniquely “Them”.