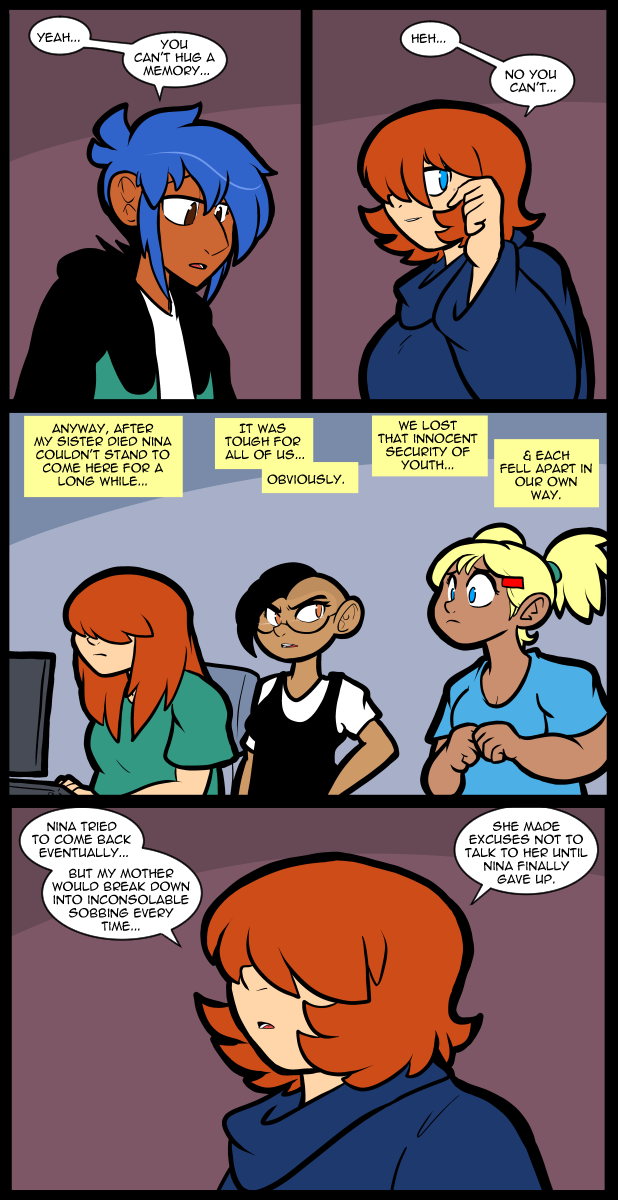 I didn’t really put a fine point on it, but I’m implying through the image of young Alex and teen Alex that she started having a hairstyle that covered her eyes after her sister died. I may circle around at some point and really nail it down later, but I was hesitant to throw in more stuff just to do that here. I feel like most of you will pick up on it anyway. Additionally, if you look at the three girls here it’s supposed to passively illustrate three reactions to grief that sort of explain who they are as adults. Alex has closed herself off from people, Evrina is angry about everything, & Maddison is anxious. For a lot of people grief & acceptance of their own mortality, or lack of it, defines who they are as people. The first big loss of your life to death seems to alter every person deeply.

I’m sure there must be people who encounter death & have no reaction at all, because there are all kinds of people & some people simply have no capacity for thinking deeper than the now, or the self in the moment. Someone like that would be very suspect to me though. That seems like a dangerous trait & one I’d rather not encounter.

Did the anxiety contribute to Maddy being less good at school? She does seem to have gotten over that element at least, but I don’t remember any indication of what she was like before the accident.

She was never the brightest bulb, but the emotional trauma certainly didn’t help. Processing grief can make focusing on things much more difficult, especially if you already have trouble with that.

I thought Nina was driving the car. From the looks of things they look too young to be High schoolers.

I forget; was it ever mentioned in previous comics HOW Alex’s sister passed away or is this the first time readers are finding out that she did pass away?

I’m reasonably certain it’s been stated. I know that the car accident has been touched upon,

We knew there was a car accident. This is the first point where we’re getting details though.

This is the most detail we’ve gotten, IIRC, however the only other bit we have been told on the subject is that whatever the accident was it could be interpreted to be Nina’s fault. Of course, that may have just been Nina interpreting Alex’s mother’s turning her away as blame rather than Nina being a reminder of her loss, but I vaguely recall Thomas mentioning that folk’s at their high school also blamed Nina somehow, but that was long enough ago that I could be remembering incorrectly.

Ninja’d, apparently it was a car accident, which I hadn’t remembered

Is that Nina? Looks like she went from super skinny to fat back to super skinny. And it looks like Nina went younger, if that’s Nina.

The skin tone is too dark to be Nina, that plus the weight and apparent youth means that it’s most likely Maddy.

i was wondering the same, because Maddison’s hairs was brown in the previous pages right?

oh wait, that was Kia with the brown hair

I used to clean a crematory, and only once did seeing a corpse unsettle me. A larger woman wasn’t completely held within her cardboard box, and an arm with side bag arm fat stuck out of the side. Seeing the dead body part didn’t scare me, so much as it reminded me of my maternal grandmother. She’s still with us, but thinking of her there at that moment was a bit much.

Death is a big part of our foundational upbringing, no wonder why this would create a riff in some friendships. I hope that she can be the glue to hold Nina and Alex back together. Jo = Best Character at least for the evolution of the others in the group as I can see it.

The shot of Alex pulling back a bang from her eye is very effective.

Jo has a way of getting straight to the heart of things.

Regarding the death of loved ones, I had eight close family members die in the space of six years. My Dad, both sets of grandparents, aunts and uncles. It sucked. Every Christmas just got sadder and sadder for awhile. Pretty soon it was just down to my mother and me because it was too painful to even try to get together with what remained of our shattered family. It was hard to see the living during the holidays, because there were too many memory-ghosts of the dead.

I remember one year we were together again for Christmas (I had just graduated university that year, after having skipped a year because of Dad’s death). Mom and I looked at each other bleakly under another sad Christmas tree, and I said something like, “Well, I guess this was a good year. No one died for once.”

Then Mom and I broke out into kind of this sad-angry laughter. Gallows humour. It’s a thing.

Panel 2 is an interesting picture.

I guess that Alex is showing Jo more of her face, so that it will be easier for Jo to see what Alex is feeling.

Some people who have ADHD and other diagnoses like it tend to have issues understanding their own and others feelings in situations like that. I’m honestly not sure how death affects me personally even though I’ve lost 3 family members (over the years) and a very dear friend just over a week ago now. It’s hard on me because I just don’t understand certain aspects of situations caused by loss sometimes.

I wonder if I’m one of those people who’d be regarded with suspicion for not having a strong reaction to death? And not (as far as I can tell) having been changed deeply by the death I’ve encountered.

I think the thing is, as far back as I can remember I’ve been aware of my own mortality. I was born in the mid 1960’s with cystic fibrosis, and was aware well before my early teens that I wasn’t expected to live long. Indeed, when I was 7 I was slowly dying of starvation because the digestive enzyme supplements back then weren’t much good. Obviously I got very lucky in the treatments I received.

So, anyway, encountering the family deaths I have (grandmother to cancer, father to Alzheimer’s) wasn’t an existential shock to me.

Maybe if I’d lost a parent, sibling, or close friend at a young age in shocking circumstances as shown here would have had a greater impact on me. Or maybe I’m just good at accepting reality. But it is slightly disturbing to see myself (even implicitly) described as having “no capacity for thinking deeper than the now”, being “very suspect” or having what “seems like a dangerous trait”.

Possibly human experience and nature are just a little wider than can easily fit into any one person’s worldview? Just a thought.

The fact that you wrote this much about it proves that you do have a strong reaction to it, it just isn’t weeping, or something similar. Introspection & acceptance are not the same as emptiness.

Thanks for your thoughtful response. Possibly one thing to take away from this discussion is that people shouldn’t be judged too hastily; the only person who really knows what they’re feeling is themselves, and they may not demonstrate that or communicate it.

And human communication (and the assumptions and misunderstandings that come with it) is a bit of a minefield :)

People handle grief and shock in different magnitudes. Some people experience Acute Stress disorder after witnessing or partaking in a traumatic event, and one possible symptom is complete shut down, emotional numbness. These symptoms can last a couple days to a month, after such time can be diagnosed as potential PTSD.

I also think, in some cases where the death was very expected, some people handle it better. Personally, I still cried, but the grief was much easier to handle.

I personally don’t have much trouble understanding other’s feelings regarding death. At least I don’t think I do but I do get that they feel it a lot.

This might not work with everyone’s emotions, however, here is a great article:

” Feeling Nothing During Grief: The Experience of Emotional Numbness “, by ELEANOR HALEY.

I believe the article is about- feeling numbness during grief, + that is OK, and how your feelings might change from that numbness, at a later time.

Anyhow, here is a link to the article-

Given all of the comments regarding death and the emotional response to death… I am a funeral director/embalmer. During college I got into a rather loud and long argument with a professor (during class) about reactions to death. He insisted that grief as processed through the stages of grief were the only response. I called BS rather vehemently. Reactions to death can’t be shoved into a neat series of boxes. The reaction to a death is as unique as the person combined with the nature of their relationship with the deceased.

I’ve felt nothing upon hearing about a death. I’ve felt anger, rage, sadness, like my world was shattered, numb, happiness, peace, joy. I’ve had reactions that most would label ‘inappropriate’. Yeah well, when I heard a certain person was dead I went out that night aced night the bar a round to celebrate. Three fact that that horrid excuse for a person was no longer breathing was a thing of joy for me. I had the most restful sleep I’d had in decades knowing that they were gone.

So yeah, grief isn’t always the reaction, and that’s ok. Any reaction you have is ok. Same with ‘it’s been a week/ month/ months you should be over it by now’s BS. There’s no exact timeline for ‘getting over it.’ If its been months and your emotions are still interfering with your day to day life, get help. Otherwise, process on your own time and tell anyone who says that to bugger off.

If anyone has any questions about the death care and grief industry I’d be happy to answer them.

My reaction to death tends to be sobbing & joking at random intervals, because on some level death is like slapstick.

I always remember when my great grandmother died, when we were at the funeral home it was a literal home & not 30 feet from her corpse the kids were just watching TV like it was totally normal. For them I guess it must’ve been.

The small farming community in SW Oklahoma where I grew up was much the same. The funeral home was run by one of the long time families in town. It was an old two story home with the funeral parlor downstairs and the family lived upstairs. Even into the 1970’s the town supported two funeral homes, now there is just a franchise business in one of the old stores on main street.

I’ll bet the Prof was a psychologist. After having worked in the field for nearly three decades I can tell you that there is often a marked difference between academics and practitioners. After a while you learn that a lot of that stuff that is preached as gospel is more of a guideline.

Sorry I’m months late on the reply (teach me to bookmark pages I’ve left comments on), but no, actually, he wasn’t a psychologist. He had a Master’s in Funeral Service with an Education minor. He was just a dour little man that didn’t like being challenged.

He was a pompous jerk who wasn’t used to someone in their 30’s calling BS on his ‘adult’ pronouncements.

Huh. Did Evrina always have glasses, on this pages?
Although they are small-ish glasses, and sometimes I miss seeing some small stuff.