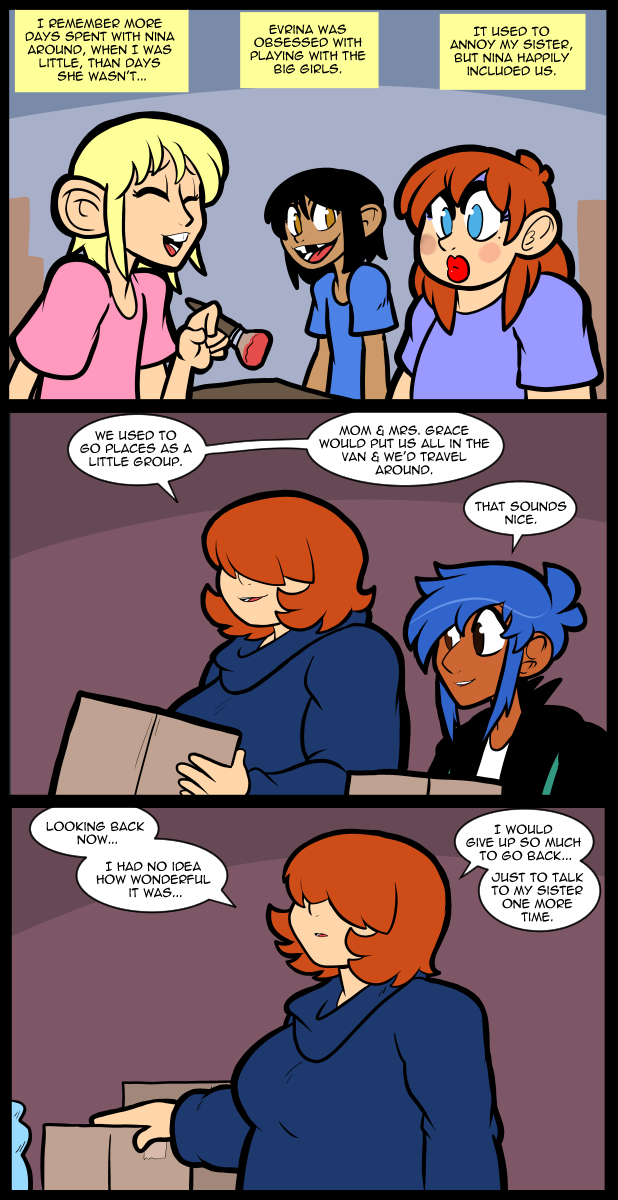 I’ve always known that doing this arc was going to get to me emotionally, but some losses you never really get over. You just put them aside so you can keep living. I was afraid this wouldn’t ring true to others, but it does to me.

Why do i think onions are about to be cut here.

Too much information, I know, but-

This storyline reminded me of a friend of my family’s.
** My story involves someone dying, by the way. **

He was very successful in medicine or science.
I tried to avoid him , most of the time, because he mostly rubbed people the wrong way- by acting like an unwanted bully or an unwanted teacher, + telling them 1] how their choice of a job wasn’t his idea of “the best” or 2] that they had the “wrong” boyfriend, or something.

Towards the end of his life, he could still walk slowly + had all of his faculties, but some sort of aging-related problem made it hard for him to speak, sometimes.

He was over at my family’s house, one day, and asked me to sit + talk with him awhile.
I told him I couldn’t. I had to run off + get a haircut.
I was told later, by my Mom, that he was kind of…very disappointed, + sad, that he couldn’t talk to me that day, since he usually didn’t see me often.
A few months, or years, later, he passed on.
That’s what really hurts my conscience, and really bugs me.
I know…I know…, I couldn’t of known that that would be the last day that I would see him.
I just really, really, wish now- that I had stopped + talked to him awhile, on that day.

That’s kind of a sad story I just told. I apologize if I made you feel down, by sharing it. Later on.

It’s important to tell these stories, even if it’s to strangers on the internet. Thank you.

It was read and it will be remembered.

Thanks. I really mean that. That’s really nice of you to say. Thank you. :)

Putting aside instead of getting over describes the suicide of my 14yr old cousin perfectly. Never really got over it so much as put it away somewhere deep enough that allowed me to get by without letting it interfere with day-to-day things. :(

There will always be those people who we will always wish we just had one more moment with. Just one more chance to see, hold and talk to. That’s the cost of loving someone, that you don’t stop loving them simply because they’re not around anymore.

I’ve been lucky thus far, knock on wood. I haven’t lost anyone who I had left things unsaid, who didn’t know the regard I held for them, the importance they held to me. The conversations that needed to be had were had. One day that will no longer be the case, I know. I’m quite deathly afraid, quite literally, of what will become of me when I lose the core members of my family. Blood and otherwise. They’re the only things that keep me around, y’know?

But the day’ll come where someone critical to me will pass that I hadn’t had all the important conversations with, mended the bridges as well as they should’ve been. Left things unfinished. And I know myself well enough to know that will tear me apart inside, each and every time I remember it.

You’re not alone with having those people passed that we would do anything to see again. It’s part of the human condition. The only help for it is making sure that that void that’s going to be left in our heart when they’re gone isn’t going to rip apart the rest of the contraption. The best time to plant a tree was 20 years ago. The second best is now.

To anyone reading this, if anyone came to mind while you were parsing through, I encourage you to let them know what they mean to you. No matter how out of character you worry it might seem, no matter how mushy you think it might be. You will regret the alternative far more than any momentary, transient embarrassment you might, quite unnecessarily, feel. Hell, feel free to run your rough drafts off of this for all I care.

This pain set aside instead of gotten over; it is known to me.

But after awhile one gets used to the burden. And when its too much you set it down.
Like any other part of us, it grows stronger with exercise.
Until one day you forget to pick it back up as you go about your daily habits.
And you dont even notice it wasnt around for a while.
Its good day, over all.
Until you ask, “why am i so different today?”.

All of a sudden, there it is. It was behind you the whole time.

Right where you left it. ANd you pick it up.
The burden settles in and ‘normalcy’ resumes. Life, goes on.

And so do you.

But thats just the start.
Eventually, you can find yourself going days, even weeks not thinking about it.

But dont worry it will always be there for you.
Right behind you.
Right where you left it.

Yep, a real sock in the feels on a Friday morning, but at least Evrina looks like an extra from “Labyrinth”, so that’s something.

I’m reading this on a Saturday morning, and it’s still a sock in the feels.

How the hell is Evrina cuter with one of her buck teeth missing? Someone explain this phenomenon to me!

Maybe she does the Halloween costume trick, + blacks out her teeth with eyeliner.
I think this girl knows how to accessorize! :D

Can I just say Jackie, I have been waiting for this arc for so long, and now I am so excited we finally get to see it!

Rereading through the comic again had me noticing all the sprinkles that have led to now, and it’s still so surprising how well thought out and planned the comic has been.

Her eyes are blue? HER EYES ARE BLUE!

A fact that has been known for years at this point…

*Throws rubber chicken at Jackie and runs away*

I know what that feeling of loss that you just learn to ignore is like. On the 22 of August my father will be dead for a year. I never stopped missing him. I have just grown numb to the pain of him being gone. Mom and I found him on the kitchen floor. I had to stop grieving while I was still looking at him, because my mother needed me to be the rational one. So I put the grief away, and boxed it up, and just function as best as I can while ignoring it.

Back when reality moved from vacuum tubes to single transistors, before integrated circuits, a school year ended for me. And all The students went home. After things had settled into a routine at work ur house, (about a week) I went by my best friend’s house, and It was empty. For sale, no one there, nothing in the rooms, Vacant, all gone.
Mom tried to explain but she didn’t know what happened, none of the neighbors did. Whole family just gone away. I stopped missing him about the time I got married. I haven’t thought about him in months.

But when someone disappears— that’s one thing. When someone takes their own life, that leaves a hole in all of the town, the whole community, and life is not the same.

This got me thinking about when I lost my best friend, and it all just kinda came rushing back. Not sure why I’m posting about it here, but lacking social media or friends I guess this is the closest thing I have to an outlet.

At the time it happened we were both mid-twenties and had been friends since kindergarten. I literally couldn’t imagine life without him. He was my brother by another mother, and we did just about everything together. He even told my girlfriend at the time (now wife) that we were a package deal, and you couldn’t have one without the other. My wife still gives me a hard time about this, and it still makes me laugh a little, even though it’s been most of a decade.

The last time I talked to him, he called me while I was on my way to visit my fiance after work (planning a wedding and all). He just wanted to fill me in on the office gossip from the place we used to work at together. We chatted for a while but it was late and I was driving (no Bluetooth yet) so I told him I had to go. He got a little pissy with me and said “Alright, fine. Go be an adult. Bye.” I want sure if he was really mad at me or what, but I really wanted to can him back and assure him I would talk to him later. Since I was driving I decided to wait, and promptly forgot when I got where I was going. I finally remembered when driving home, but with it being late I just figured I’d talk to him the next day after we were all off work.

The next morning he got run over, riding his motorcycle headed to work (last warm day of the year, there was a cold front rolling in). He barely made it to the hospital, and died shortly after. I found out that afternoon after wondering why he wasn’t texting me all day. He died before I even messaged him the first time.

I will regret for the rest of my life the fact that my last conversation with my brother and best friend ended on that sour note. I regret not calling him back. I still wish I could call him to talk… I need his advice.

The day my uncle Jason died my uncle Jon didn’t have, or perhaps make, time to talk to him before he got in his car & drove into eternity. It haunted my Uncle Jon, who is the Teen’s father, for perspective, forever after that. They’re both gone now & I’ve always thought that guilt contributed to his early demise. I don’t know if there’s a world beyond this one, but I hope he finally got to talk to Jason again somewhere.

Anyway, hit me up if you want to join the Discord server. It’s full of strange people, but there’s almost always someone around to talk when you need someone.

Jackie, I just wanted to say thanks for the invite and I think I’ll take you up on it. I’ll teach out by email if I can. I’m not on Discord much, but it would be nice to know there’s some support there.

Sorry it took a while to respond. I’m home sick today and catching up on some essential reading between bouts, and wanted to make sure to come back to this and respond to let you know it meant a lot to read this (and your story)

Oh this rings true for me hard. This comic came out on the anniversary of a big loss for me. One of those Before and After events. I promise, you are not alone on this one.

I really dig the idea of Nina and Evrina being the instigators of the makeup raid, but convincing Alex to be the recipient experiment.

And would a couple of experiences like this make Alex a non-makeup woman?

I hear ya, I still haven’t gotten over the loss of my grandfather (And somehow think I never will) seven years ago and some change. Hope you are doing well on your end.